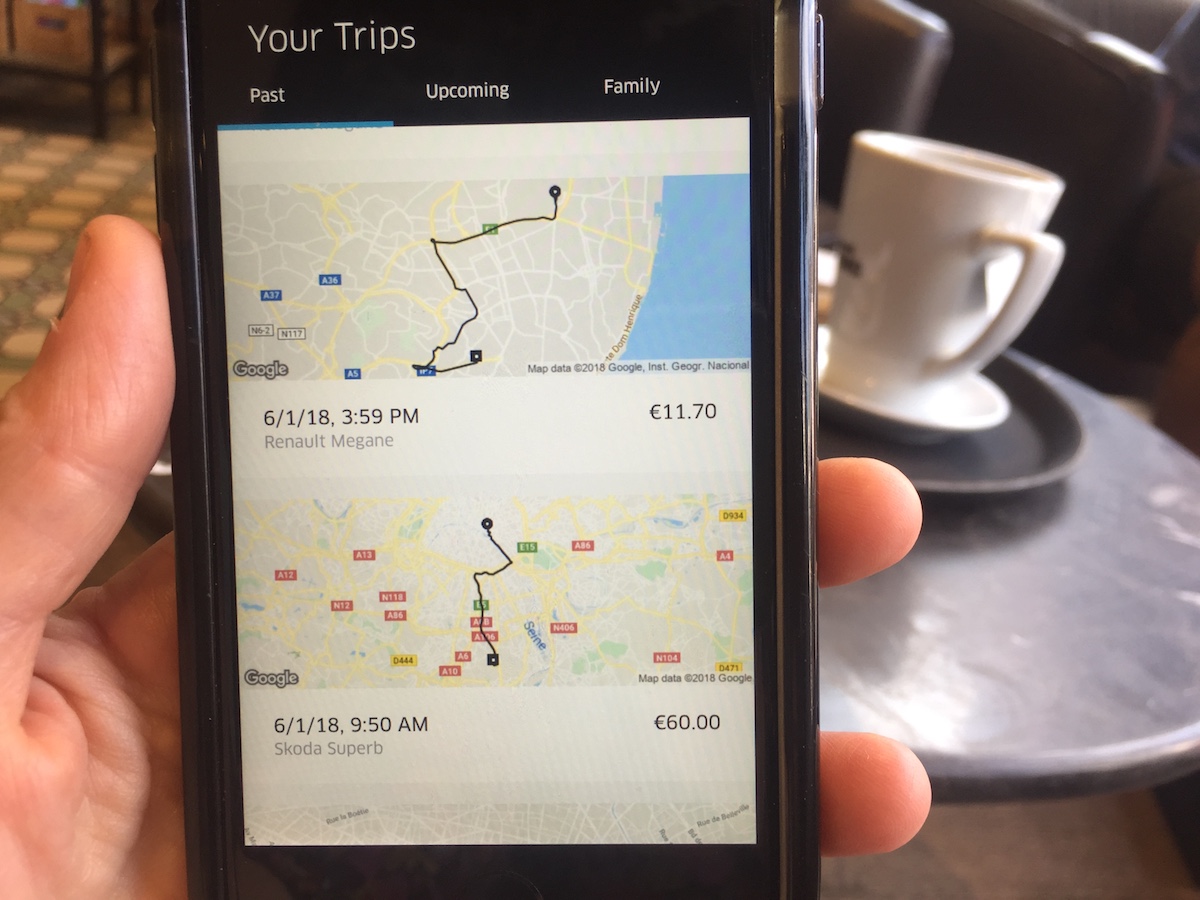 There’s UberTime, and then there’s your time. UberTime is flexible. Your time is likely not. Travelling through Europe, we’ve been getting to know UberTime. At Lisbon’s Cais do Sodre metro station we punched our destination into the app. Up popped the instantly gratifying display, connecting us to a nearby driver. Antonio would be our man. In just 3 Uber minutes. Then 5 Uber minutes. Then 7, 6 … 8. Welcome to UberTime, which conveniently for Uber does not reflect real time. We kicked ourselves for not having walked 20 feet over to a line of waiting taxis. Fifteen minutes passed before Antonio arrived.

By now, we were inured to it. We wouldn’t let it mess with our relationship, pointing fingers as we had in the past: “I told you we should have taken a taxi!” Or, “We’d already be there if we’d just walked!” This time, we put a clock on it, feeling sorely vindicated when the initial 3 minutes stretched to 15. Better than a longer wait and a fight. But the truth is, the company profits by trapping you in UberTime because if the times on the app reflected reality, you might flee. You might, for instance, opt for a nearby taxi, calculating the savings of 15 minutes to be worth more than a few bucks.

What if, instead, Uber grew up (as it’s been trying to do since the macho scandals of the last year) and stopped playing Fakey Time? What if the app showed two clocks: the total elapsed wait time, and the estimated time of arrival? Graphical or numerical stats on wait time? Ranges or probabilities? That would be transparent, valid data, drawing on machine learning, and the service opportunities would grow from there. Such improvements are bound to arrive, if not from Uber, then perhaps from another ridesharing company (such as a hot model we rode in Tel Aviv: the uber-convenient Gett, soon launching in US markets) that will recognize the value in adopting a more holistic, customer-centric approach.

Logistics and speed fuel Uber’s dominance, the unprecedented ability to request a ride, and in most places in the world, get picked up in 5 to 10 minutes. Uber largely fulfills this promise in the service glut of San Francisco and New York, but in Europe the experience is uneven. Pickups are forbidden in many city zones, a fact Uber obscures from customers. The wait time may be double or triple the initial Uber teaser time. One day in the Portuguese city of Sintra, standing in the center of town, we rolled the dice and asked each other: “Uber or taxi, what’s the better move?” as we eyed a line of taxis. We chose Uber. Great, we thought, when the app flashed a 3-minute ETA … which soon became 5 and then 8, and then hovered at 8 for another 5 minutes, then went to 11. Should we cancel, we wondered, as we stared at the app for 15-plus minutes we’ll never get back. We tried not to overheat, trading quips about creative graphics to convey UberTime: an icon of a spinning wheel, or more directly, a painful image of someone tearing their hair out.

Twenty-five total real minutes later, punctuated by “Why didn’t we just get in that taxi?”, the driver summarily cancelled us. (Yes, customers get slapped with an €8 fine for aborting, but receive nothing if the driver dumps you or the service leaves you hanging.) Then the app, in a digital twist on a skipping record, rerouted us to another ride. Our second wait commenced. Meanwhile the app was greedily sucking the last juice from our iPhone’s battery, draining it toward zero. What if our phone died? The driver frantically called us, twice, to explain (in Portuguese) that he was stuck in traffic, and that we should hike to the bus stop, wherever that was (if we’d known, maybe we would’ve taken the bus!), because he was not allowed to meet us near the taxis. We finally found him by trotting up the road alongside a line of standstill traffic, just as our phone lost power. Real total time elapsed since our first call, 40 minutes, time that Uber doesn’t share with you because, well, next time you might opt for the bird in hand: a nearby taxi.

There’s an irony here. The ridesharing giant calculates that you won’t take that step backwards to a taxi because of a lack of trust. You’re trading a transparency of cost, for an often unfulfilled promise of efficiency. Uber has removed the chance you’ll have to pull out your wallet and be overcharged, by predetermining fares and routes before you step in. The brand promise is that you’ll avoid the sometimes shifty concept called the Taxi Fare. Taxis charge what they can. Taking a circuitous route, or not turning on the meter.

“Twenty-three euros,” announced the driver when we arrived at Lisbon International Airport after a short ride from our hotel. “Como?” I said, knowing from a previous trip that the true price was 10 euros less. “Because it’s Sunday,” tried the driver, and then when I didn’t bite, offered: “Because it’s early.” I smiled at his entrepreneurial hustle, then bargained him down a few euros on the curb outside the terminal.

We didn’t have time.