Welcome to the People’s Republic of San Francisco (欢迎来到旧金山人民共和国) 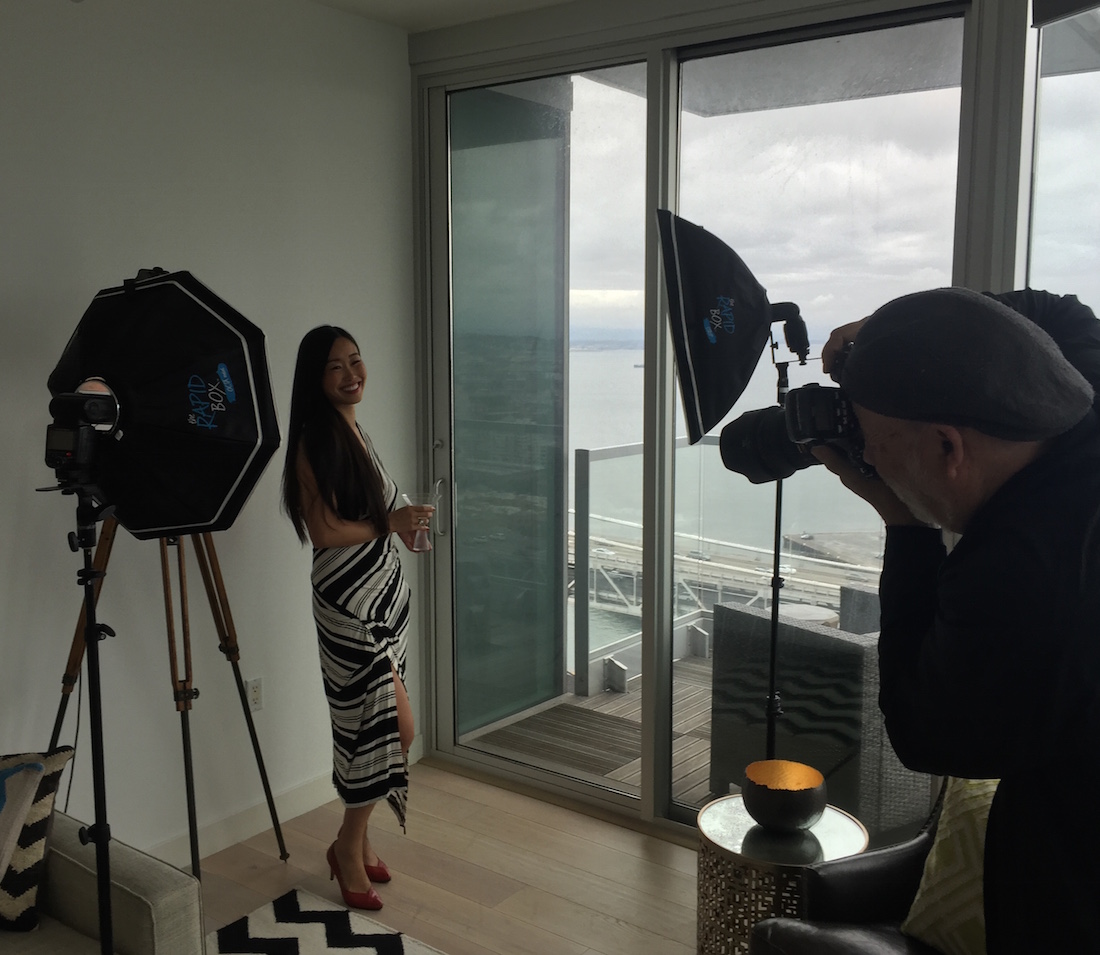 I’m standing on the 32nd floor of a sparkling new $3+ million luxury condo, attending a fashion photo shoot against the backdrop of a stunning, vertigo-inducing view of the Bay Bridge, catching a birds-eye perspective on the future of technology and San Francisco. A student in my innovation class at the University of San Francisco shows me around the apartment, pointing out gleaming condo towers to the south that have sprouted up seemingly overnight like giant steel bamboo, reminiscent of Hong Kong’s stratospheric landscape. “People from Hong Kong and China love them,” he tells me, and he should know, since his friend, also a native of China, is the top real estate broker in San Francisco’s booming South Beach. He smiles: “It reminds them of Hong Kong.”

China has arrived in San Francisco. The Chinese are snapping up multi-million dollar condos and houses, making major investments, enrolling in Bay Area universities, and sending business scouts to soak up the technical wizardry and magic, entrepreneurial sauce that can only be gained through immersion in these few bustling square miles perched on the Pacific. There are a thousand reasons why San Francisco and Silicon Valley are drawing the attention of the world’s largest economy. You could start with the SF-based headquarters of Salesforce, Uber, Airbnb, Twitter, and LinkedIn, not to mention the roughly $2 trillion in market cap within 50 miles of the city. But those SF office buildings and towers, many in mid-sprout (like Salesforce Tower, expected to open for business in 2018), are only the most visible sign of San Francisco’s accelerating importance. The honey to China and the rest of the world is San Francisco’s intense concentration of venture and angel capital, mobile tech expertise, startups, entrepreneurs, and fearless young talent. Click on Angel List’s “San Francisco Startups” and you will find 13,261 companies and 18,356 investors. San Francisco entrepreneurs, angel investors, and VCs are upending old industries (and new ones) with mobile products that can scale – i.e., go global and reap huge profits. From Fitbit, which is revolutionizing exercise and health, to Slack, which threatens to render email obsolete for many work projects, and Product Hunt, which is how VCs and geeks find the next hot app, website or gizmo, San Francisco is reshaping how we play, work, and profit.

A few days after my SF condo tour, as I park on a sketchy section of Mission Street, across from the multi-billion dollar co-working juggernaut WeWork, I notice a protest sign taped to the meter: “Evict Techies, Not Families,” a symbol of the rising friction between the struggling middle and lower classes and the city’s explosive tech growth and skyrocketing rents. Walking past the homeless, I enter the hive-like, teeming co-working hub, where Allan Young introduces me to several journalists from the Nanfang Media Group, along with three government officials from Guangdong, China, who have come to interview me and hear my perspective on innovation and the SF tech ecosystem.

Allan is a native of San Francisco’s Chinatown, the co-founder of the hip incubator Runway (located in the Twitter building on Market Street), founder of the TopLine incubator in nearby Richmond, and a savvy tech investor. The day before, Allan graciously spoke to a group of 40 Chinese entrepreneurs for whom I was hosting a tour of Carlos Muela’s SoMa StrEAT Food Park, an event organized by the University of San Francisco. Now, packed into the elevator with the Guangdong contingent, the WeWork coordinator breezily tells us about the third SF WeWork co-working space about to open (on California Street) with a cherry on the top in the form of a spacious penthouse office that will list at $50,000 a month. Allan takes this in stride, and as the doors open on the 5th floor, he turns and says to the coordinator: “I just may have someone for you.” My presentation is in a wired conference room. No plug-in, just type in the IP address to pull up my slides on the screen, and away I go, speaking in a measured cadence, five to ten seconds at a clip, my Monterey, California-trained “one grand a day” translator reshaping my words and concepts into Mandarin. What I glean that morning and again over lunch at the “Haute Chinese” restaurant Hakkasan, and yet again later, while arranging an afternoon tour for them at Galvanize, one of San Francisco’s coolest tech incubator campuses, is that the Chinese are all-in on San Francisco-style tech and entrepreneurship.

This is a global trend I’ve witnessed first-hand over the past few years, while leading innovation labs for executives and MBA students from around the world. People may head to Napa for wine, to Austin for music, or to London for theatre, but they’re flying in droves to San Francisco to learn how to reinvent business. At first my international clients were mainly from Italy, or spoke Portuguese (Brazil, Portugal, Angola), but this year, working with the University of San Francisco’s Silicon Valley Immersion Program, and UC Berkeley’s Haas School of Business and other clients, I’ve also done labs for groups from France, Germany, Kazakhstan, Korea, Hong Kong and, increasingly, China.

The fierce curiosity of the Sino-Wisdom Cultural Development entrepreneurs and business professionals smacks me in the face. I often take groups through San Francisco’s colorful Ferry Building to study design, innovation, and branding, an experiential “Design Thinking” way to spark spirited ideation sessions. The Chinese group bombards me on the tour with clever insights and smart questions – and the self-imposed filters and hesitation found in many other foreigners is strikingly absent. When we reach Boccalone’s stunning, elegant meat slicer, a showpiece of the company which highlights its core value, they ask the Boccalone employees to slice the meat, something my 1,700 previous attendees have never done, and they laugh and snap pictures while the workers happily oblige. Later, they also request a tour of USF’s hilltop campus, and sure enough my student who arranged for the luxury condo photo shoot (for the new women’s professional networking venture The Guild) leads the tour, along with another Mandarin speaker from my class, two of the seven Chinese natives in my 28-student USF class.

Touring Galvanize’s elegant five-story campus in SF’s SoMa district, complete with a public Sightglass café, and swanky Manhattan-style rooftop with a panoramic view of SF’s “Hong Kong” towers, the Chinese journalists and governors rapid-fire questions. They learn about the number of startups in the building (250), the capital raised for the startups in Galvanize’s network of US campuses (half a billion dollars), and the kind of technology being developed (every Galvanize startup must develop an app, but the business sectors vary widely). Michael Seiler, Galvanize’s 29-year-old Director of National Event Strategy, graciously leads the tour. But when the group squeezes into a startup’s tiny office, and the clock keeps ticking, I have to finally step in because I suspect the questions won’t end and Michael will lose his whole afternoon. After my third day with the USF Sino-Wisdom group, at the closing ceremony, I bring out a Mandarin-language edition of one of my innovation books. The group’s host is tickled, and several attendees grab the book right out of my hands, start snapping photos of its cover, and then line up, the 40 attendees wanting individual photos with the author. History holds an irony, for the Chinese have long been drawn to San Francisco. During the gold rush, it was quicker to arrive here by boat, and the Chinese were among the first immigrants to land in search of fortune, while providing for their families back home. By the late 1850s, they made up one fifth of San Francisco’s population. Crop failures in Southern China brought thousands more who faced discrimination, harsh conditions, and risked life and limb to build most of the perilous stretch of the Transcontinental railroad over the Sierras and into the interior plains. The Chinese name, then and now, for the city by the bay is Old Gold Mountain.

The hunger for riches isn’t going away any time soon. Welcome to the People’s Republic of San Francisco.