California Dreaming: The Power of Play 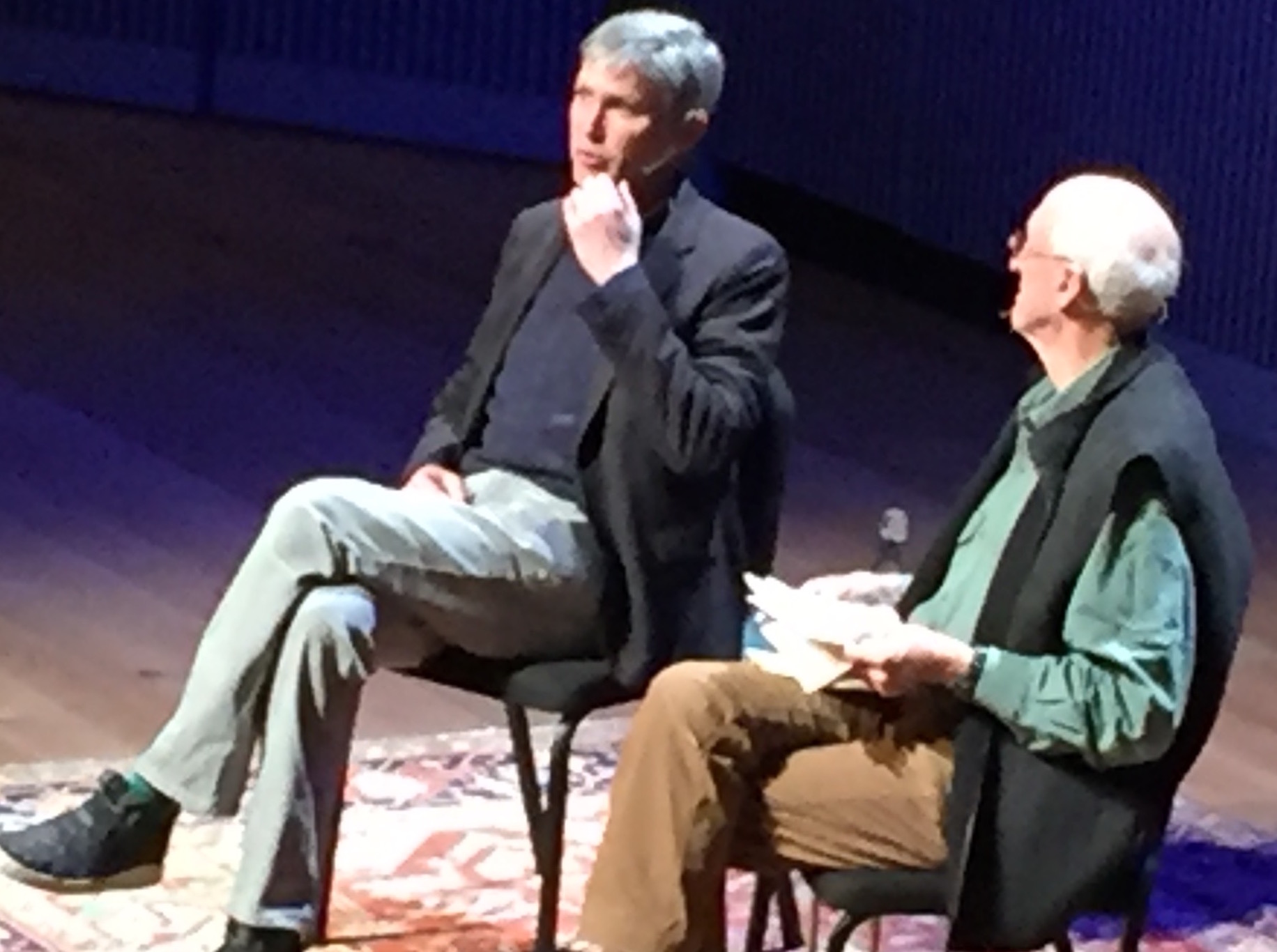 Play and her cousins whimsy and delight came to town last week when Steven Johnson, the celebrated author of several bestsellers on innovation and the new book Wonderland: How Play Made the Modern World, took the stage before a packed 700-strong crowd at the SF Jazz Center and invited the audience on a trip to consider lesser known roots of invention — 80,000-year-old shell beads, 50,000-year-old bone flutes and nearly 4,000-year-old cloves. Play and the world of “frivolous things,” he argued, are “drivers of change.”

Johnson’s intriguing examples of early man fashioning crude jewelry and musical instruments, and the pivotal origins of the global spice trade, underlined his perspective on the primacy of man’s passionate pursuit of “delight and wonder” in history and innovation. Hosted by The Long Now Foundation, the evening included a brief introduction by Executive Director Alexander Rose, and a follow-up conversation with Stewart Brand.

“Art is everything that you don’t have to do,” Johnson flashed on the screen early on, in a nod to Brian Eno, the musician and Long Now board director. The evening centered on those non-utilitarian pursuits that kindle productivity and innovation.

Johnson took us to late 17th century England, where marvelous new fabrics from India, rendered in beautiful patterns and colors, sparked a transformation in the fashion world, subsequent backlash against the women who embraced this indulgence, and the foundation for the birth of textile manufacturing in the Industrial Revolution. Large-scale looms for mass production were invented shortly thereafter, bringing these fashions within the range of the middle and upper classes, and the pace of change ratcheted up much as we’ve seen with smart phones and apps in recent years. Trends in clothing styles, Johnson noted, accelerated from a ten-year cycle to every five years and then every year by the late 1700s.

Next, the author transported the audience to Baghdad in 800 AD, “arguably one of the most advanced cities in the world” at the time, where engineers created a wondrous book of “Ingenious Devices” including the plans to build a remarkable instrument that played itself, an uncanny precursor to the music boxes that swept Europe centuries later. “This was almost a music box,” said Johnson. “You cut a cylinder,” he went on, describing this “open-ended” musical device that featured “programmability” and perhaps the first “division of hardware and software.”

Johnson’s sweeping approach to the subject of play chronicled how products may hibernate for decades or centuries before someone figures out how to “cross” them for new utilitarian purposes. Take medieval looms. Johnson noted how they too played a part in the lead-up to Charles Babbage’s Difference Engine, and later computer punch cards. Then came the quirky history of keyboards – present in Rome nearly 2,000 years ago, ubiquitous in pianos, organs, and other percussion instruments for many centuries, until finally morphing into typewriters (an early prototype was dubbed the “writing harpsichord” in the mid-1800s) and eventually computer keyboards.

Johnson’s narrative of the pursuit of play and delight throughout the ages invited us to consider how his theories might apply to San Francisco and our thriving culture of entrepreneurship. Play comes naturally in California, the land of sun, beaches, surfing, and the birthplace of free love, experimental drugs, and rock and roll. Play and work in California are often joined at the hip. Outdoor recreation is a big draw here, and we’re refreshingly free of the stifling office towers and factories that blight many other American states. In California, play is often intertwined with product development.

Play is a great place to begin, perhaps the best place. This may seem odd until we examine human motivations. Why does a Californian entrepreneur who successfully launched one company, start another, and another? Money doesn’t explain it. Or pride or ego. Play and the search for delight does. Our best entrepreneurs often begin with play. Consider Nick Woodman. At his San Francisco Peninsula high school, he became obsessed with surfing and ditched traditional sports. His passion for waves led him to attend the University of California, San Diego. He continued to surf while launching an online gaming service that swallowed up $4 million of investor cash before becoming a dotcom footnote. His plan was to go straight, get a real job — after one last awesome surf jaunt through Australia and Indonesia. The only thing missing was a good camera to document his travels. Woodman cobbled together a broken surfboard leash, rubber bands and a throwaway Kodak camera: the first prototype for what would become GoPro, a technology that would help shift the evolution of sports even more toward play and adventure, and away from rules and coaches.

Or take Jack, an introverted boy with an unlikely fascination with police scanners, trains, and geography. His room was covered with maps, and as a teenager he began coding taxi dispatch software for kicks, hacked into the website of a dispatch company, and got himself a job. Like so many entrepreneurs, he dropped out and headed West to seek meaning and fortune. In his early twenties he thought it would be fun to “live-blog” his location to his friends, and no one seemed to care. But the technical exercise in group play morphed into a related idea, a simple site where you could post short text messages, and on March 21, 2006, Twitter founder Jack Dorsey posted the world’s first tweet.

Blasting out mini-messages to friends, a veritable technical bullhorn, and snapping action shots while surfing – who could argue that these don’t sound a lot like fanciful, childhood pursuits? Yes, play and our never-ending search for “delight and wonder” are closer and more pivotal than we might imagine, and they just might be the magic sauce of entrepreneurism.