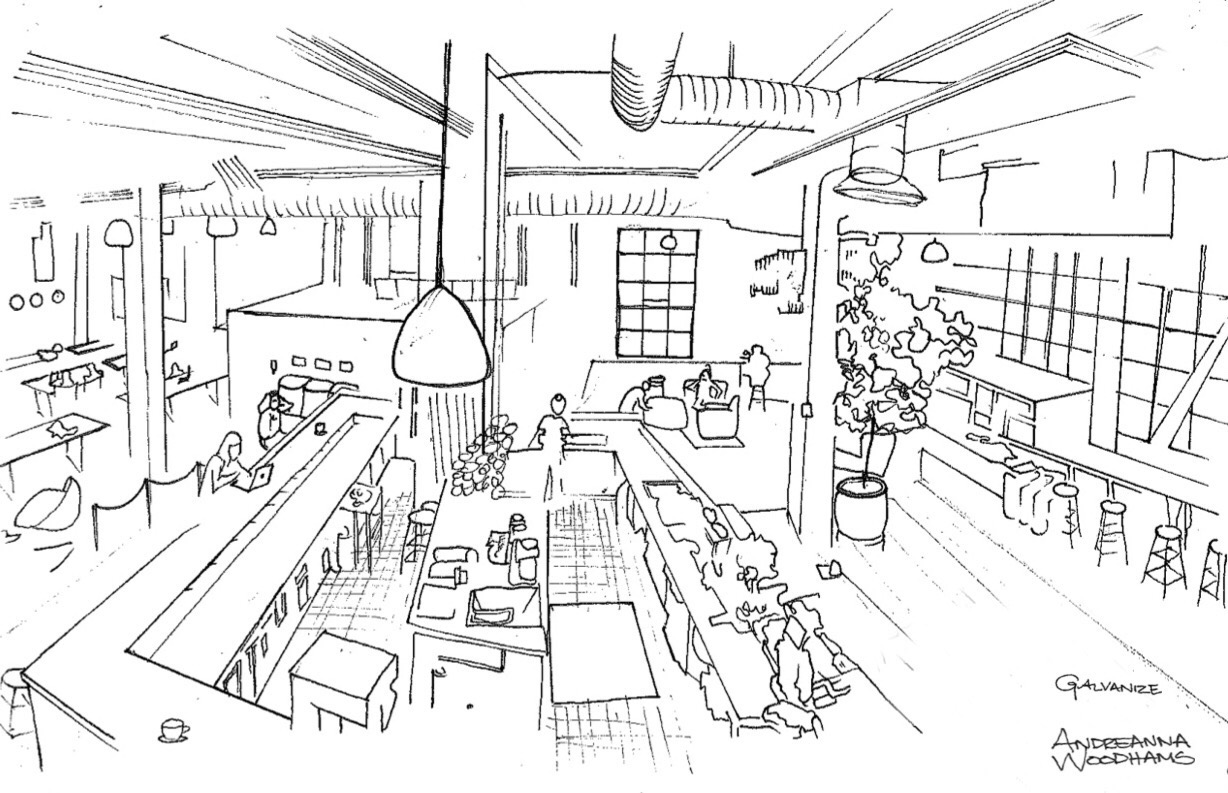 Galvanize San Francisco is an entrepreneurial hive: a tech campus, incubator and corporate innovation lab, all buzzing and thrumming in one dynamic five-story building. Smack in the heart of San Francisco’s entrepreneurial SoMa district, the community is comprised of 1,000 members, including 250 startups, 200 tech students, and elite corporate partners, while playing host to a frenetic, diverse mix of 30 to 40 events every week. Galvanize SF is one of eight campuses nationwide, with other locations in Denver, Seattle, Austin, and New York.

This is our second in a series on local and international incubators and technology hubs, a deep dive into what makes early-stage startups and high-performing entrepreneurs tick. Andreanna Woodhams created the drawings. Jonathan Littman interviewed Michael Seiler, Galvanize’s National Events Director. 如果您想看中文版本，请跳到最底页

Hospitality is part of our secret sauce. Every Galvanize campus has an open-to-the-public café. We want all sorts of people, from both in and out of the industry, to be able to come to our events. You don’t need to sign in and sign an NDA. The look is an industrial meets tech modern design. The previous tenant was an architecture firm, and we spent about a year retrofitting it. There’s a lot of exposed brick and concrete floors, and pipes in the ceiling. Juxtapose that with glass walls, high ceilings, and a modern café, with an interesting, angular bar.

When we first leased the building in early 2014 we had five floors plus a lower floor and rooftop. The fourth floor opened a few months later, and that was huge, because it enabled us to do a soft launch with some startups and foundational partners, and to host events and do marketing and tours. That floor gave us the ability to bring people in, even though we hadn’t fully opened.

Google for Entrepreneurs, IBM, and Silicon Valley Bank were our founding partners. Google for Entrepreneurs is focused on helping entrepreneurs and startups grow. They designate tech hubs around the country, and they chose us for SF. That gave us immediate credibility for workshops and mentors from Google. IBM also chose Galvanize to be the home for its Bluemix Garage, and built its app-development platform and housed its team in our SF campus. Silicon Valley Bank provides free Finance 101 classes to startups with the idea that they’ll hopefully become clients. So they started offering everything from how to set up a startup P&L, raise Series A funding, and organize finances.

The Grand Opening and Building a Culture

We opened the entire building with 700 people around the 2014 holidays. There was some chaos, but pretty quickly we got all the nuts and bolts figured out. We had probably 75 percent capacity, starting with 150 startups and roughly 75 students. The culture starts with the application process. We’re looking for “mobile first” startups. Is this a company looking to set up shop, or one that wants to take advantage of the programs and mentor sessions? Are they going to participate in our community “Meet and Eats,” our “Lunch and Learns,” our Community Happy Hours? If not, we’re OK to say “no” and forgo the revenue.

The building lends itself toward breaking down barriers. In any particular room, we’ve got companies working on their own thing, sitting next to others doing something completely different. You just start to build relationships and friendships. You’re building a fintech venture, and you’re looking to get some help with email marketing. Then that person next to you says, “That’s what I do.”  You might be at your desk or a Lunch and Learn. It just happens spontaneously. The Pivot: Connecting Coding and Enterprises

Early on, the focus was on coalescing the community of entrepreneurs and startups, but then there started to be so many job opportunities. Immersive education in tech has become a much larger part of our model. We’ve transitioned from big company suites and event spaces in San Francisco and turned them into classrooms. We still have a lot of early stage startups, but now you’ll see more established companies. That speaks to having more graduates.

Booz Allen Hamilton takes space at Galvanize SF because it gives them access to students working on their capstone projects, and they can also learn [coding and startup culture] and grow. Enterprise relationships have become a greater focus because there’s such a high demand. Every company today needs to build an online presence, and everyone needs data analytics.

Price Waterhouse takes suites in each of our campuses, and we train Allstate employees around the world. A few of the executives [from these corporate giants] work out of our campuses. Their leaders speak on panels, they mentor startups. It’s not just about the training. Let’s say IBM Watson wants to advance new technology. We can host a series of events at our campuses that engage our development communities.

Our members are all tech startups –– from fintech to medtech, healthtech, adtech, and foodtech. Take any industry and put tech on the end of it and we’ve likely got a startup in that category. We also have consulting startups working to help other companies implement data science and artificial intelligence. Accelerator programs set up shop at Galvanize, like Growth X Academy. They’re similar to what we do. You can enroll in the Academy and learn growth marketing and entrepreneurship.

BootstrapLabs, for instance, is a VC firm that brings in cohorts from all over the world and offers Silicon Valley immersion. They also have an artificial intelligence fund, and last year put on an Applied Artificial Intelligence Conference at our San Francisco campus.

Our members include Will Bunker, the Match.com founder, and Women Who Code, a non-profit tech organization focused on equalizing the gender ratio in tech. We have a refugee from Iraq, who enrolled in our data science program and is now working. Martha was a touring musician who was trying to make ends meet. She toured the country, but needed something more stable, and she took our three-month data science program.  She had no computing background, but it turns out that learning and analyzing data is much the same as music. So much so that she’s now one of our instructors.  Our most interesting student story may be the man who was recently pardoned by President Obama. Chris had served ten years for growing marijuana. He enrolled in our web development program, and now he is a web developer at Amazon, easily able to provide for his family.

There is this understanding that the tech industry is constantly evolving, and that the traditional models of education can’t keep up. Whether it’s learning the right coding language, or what you need to do to raise a Series A, our concept is to be constantly evolving thought leaders. Galvanize is a fluid and dynamic learning environment filling the gaps and potentially replacing traditional educational institutions.

Our programs range from a three-month data science program, to a six-month web development program to a one-year accredited Masters in Data Science. Graduates from our three-month program are candidates for junior data science positions at pretty much any company [Galvanize purports to have a 92% job placement rate for graduates]. Starting salaries are $80,000 to $100,00, and it’s not uncommon for starting salaries to be over $110,000.

Inspiration from other Tech Incubators

Impact Hub in Oakland is a good one. The design is beautiful and it feels eco-friendly. The name says it all. The only companies inside have a social mission. You’re bringing together these startups and this motivated community of people who are trying to change the world.

We’re grateful to Michael Seiler for sharing his insights. Galvanize is radically different from other tech hubs in the way it combines a tech campus, startups and a hearty corporate focus. Few hubs can compete with Galvanize for the number and quality of events that they host. This holistic approach to community building and a market responsive model to technical training and entrepreneurism raises the bar for all of its members.  Consider our case study questions below for a deeper reflection on tech community done right, and if you haven’t read it yet, take a look at the first tech incubator in our series, San Francisco’s Runway.

Entrepreneurs lend us a fresh perspective on our own projects and companies. They help us think broadly and make new connections. Here are a few questions that the unique focus of the tech incubator Galvanize brings to mind.