How We Work: Runway’s Startup Engine 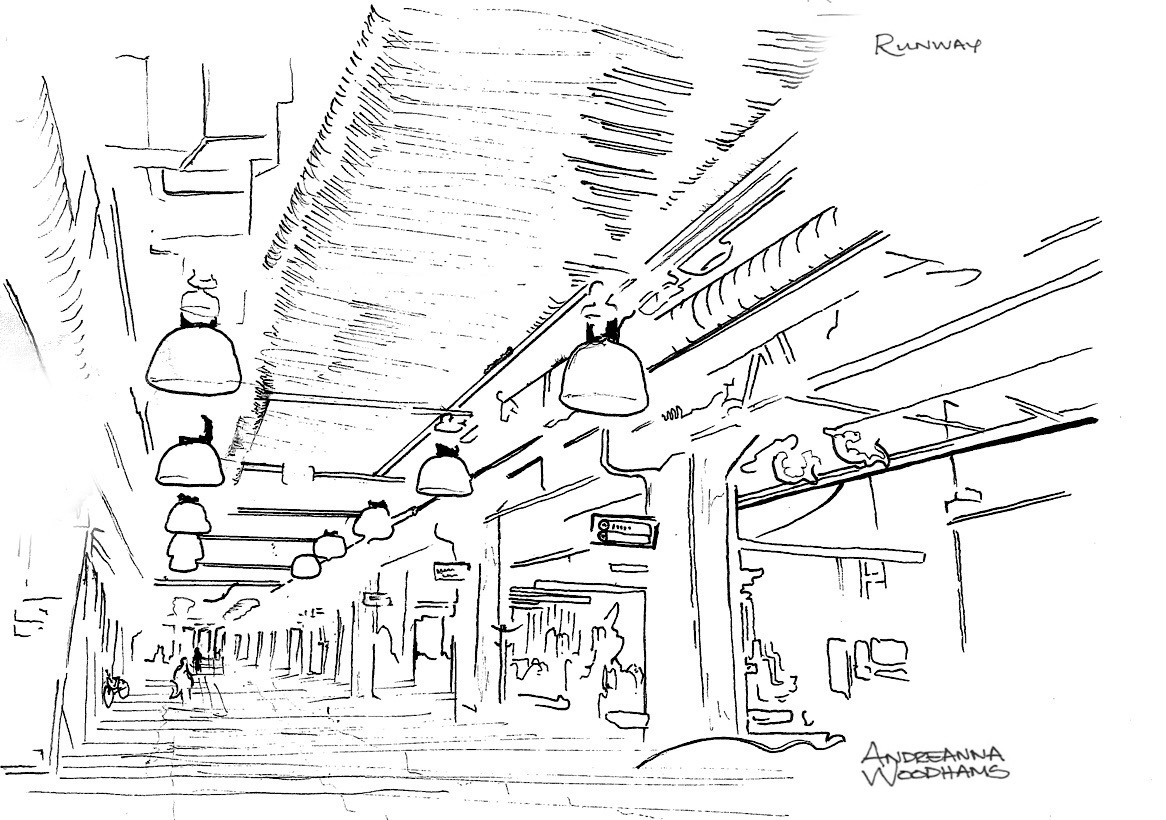 Runway, the stylish tech incubator in the Twitter building at 1355 Market Street, is the product of Allan Young’s experience and imagination. Allan is a Y Combinator alum, graduate of Seth Godin’s Alternative MBA Program, native of San Francisco’s Chinatown, and an active technology investor. This is our first in a series on local and international incubators and technology hubs, a deep dive into what makes early-stage startups and high-performing entrepreneurs tick. Andreanna Woodhams created the drawings. Jonathan Littman interviewed Allan Young. 如果您想看中文版本，请跳到最底页–本文由来自上海的王豪盛翻译

From Inspiration to Incubator

It was an honor and a privilege to be backed early on [as co-founder of a startup] by Y Combinator, one of the top accelerators in the world. My incredible learning experience there made a big difference. I noticed that there was such a strong culture with all the groups collectively, but we didn’t have much of a physical space to gather. We’d convene at Y Combinator’s office one evening a week, but I was craving more interaction with my fellow batch mates. [Allan was one of 30 startups in the Winter of 2010 Y Combinator “batch”.]

I wanted more connection. Many of the other teams had extremely talented technologists and entrepreneurs. I wasn’t so much looking to talk to them every hour, or every day. I just wanted to be in the same space, to see and to feed off of their speed and urgency – though, yes, of course we would talk. That one evening a week, getting updated on all the teams, was inspiring and motivating. It was also frightening. Some teams were moving so fast. It was like, “Wow, we have to step it up another notch.”

That was a huge influence in my decision to build an incubator. Another was hanging out with Seth Godin for a year, in 2009, as an inductee in Seth’s first Alternative MBA Program. We sat in his offices for five hours a day and talked. It was an informal program. We talked through lots of different MBA and non-MBA topics: Seth’s take on marketing, community, and giving gifts. None of it was textbook. Seth didn’t pay us and we didn’t pay him.

We learned so much, talking about community and sharing knowledge. Seth taught us about tribes, of having a common goal and purpose, and creating something valuable. I knew that in a tribal environment, community is essential to fostering a self-reinforcing culture.

Picking the location was less romantic. I thought we needed to be near mass transit. Once I knew that Twitter had committed to being in this building at 1355 Market Street, the justification was to follow and hitch a ride on a bigger whale. Twitter had already become a successful company. They had not IPO’d yet, but that was imminent. I knew that the Twitter location would attract clients, being in this building, being part of this watering hole.

Design was also a key decision early on. At Runway, there’s a physical runway. We designed it so that 50 percent of the square footage is desks. Approximately 50 percent is wide open – the runway, kitchen, igloo and event space.

I had visited other incubators and found them to be disappointing. The small ones particularly. They felt like shared offices, not really incubators. I noticed that there was very little interaction and sharing, and lots of private offices.

So I wanted to design a space where there was not one private office. Take an extreme view. This wouldn’t work for everybody. You don’t have your own room, the work environment is wide open. The idea was that you’d share ideas, knowledge, and lessons learned.

The open space is approximately equal to the workspace. We think there’s a golden ratio to that. If you’re a member of Runway, you can’t get to your desk without bumping into someone. If you’re social enough, inevitably you’ll share ideas. That’s the magic. With all these open spaces we create collisions – accidental collisions. One big technical challenge was that it was this concrete shell that would have had massive echo and noise control issues. We worked with an architect and designer to minimize that, and I think they did an excellent job of solving that problem without making it too muffled or padded. We built three slatted wood canopies, and that small, unique design did soften the space a bit and added a visual touch. It’s highly functional: sound waves get trapped up there. We maintained the cold, harder feel, and that sense of speed, while eliminating the noise.

We knew that to design a space for productivity, we wanted to create different environments. The igloo, for example, is a shock to the cognitive senses. Sometimes it’s not enough to think differently. You might think more creatively if you’re in a different space. This was building off concepts found in Google and IDEO. If you’re stuck every day in the same place, your creativity can decrease. The igloo is a small, micro environment where you can get out of Runway without physically getting out of Runway. Based on feedback, it was pretty effective.

I don’t think I built the culture. I hired good people who are big fans of startups and entrepreneurs, people who are genuinely interested in entrepreneurship. We picked good teams. No assholes. They ended up building the culture. They created game night, where members played video games and board games. We had dynamic sessions on how to hack for growth. This was all initiated by the members. Within six months of our open date on January 13, 2013, Runway was full. We had over 80 teams and just over 200 people.

I don’t know if this would work for everybody, but we are generous with the communal space. Everyone who opens an incubator has this conflict. They’re trying to make the space pay for itself, and to maximize that, they have very little communal space. If you can charge for more workspace, you’ll have an easier time turning a profit. But I think the results and outcomes would be horrible. You’re putting everyone in a sardine can. We tried to be more liberal with our free, open space that we couldn’t charge money for. That’s number one.

Then we had to fill the space and attract a lot of good teams. We never bought an ad, online or offline. We didn’t go to other events to pitch Runway.  Instead, we hosted as many events as we could that we thought would attract teams early on, and charged very little for the event space. That’s a growth hack. We started with my network, and once my network got to know Runway, the only way to expand was to run as many events as possible. This was another way of growing the culture.

The Realities of Real Estate

When you’re dealing with something physical, either hardware or real estate, things move slower than you anticipate. Real estate is super expensive and takes a long time. It’s shocking how much it costs to build out a new space. For the same money, I could have funded many startups.

I’d never managed a space or dealt with real estate. Running an incubator is a labor of love. You really need to have a lot of energy and put in a lot of hours, if you want a great outcome. You manage for the teams, you don’t manage for the incubator.

We were very instrumental in helping the drone company Skycatch get its first couple of customers. That led to product validation and product development, and investment by Google Ventures. They’ve raised a lot of money [approximately $30 million]. They may bring about autonomous earth moving equipment. What Tesla and Uber may be to self-driving cars, Skycatch may be to the self-driving bulldozer.

DripStat started at Runway. DripStat is an application performance management platform created by one lone engineer who has built something exponentially better than the multi-billion leaders in his space. This is a great example of someone who came through Runway more for the interaction and the community. The company has had minimal funding, and I recently invested in them after they left Runway.

Learning from the Competition

I think Galvanize runs an excellent space. They’ve taken design to a whole new level. Runway was the design leader for incubators in Silicon Valley. Then when I saw Galvanize, I thought, wow, they’ve surpassed Runway. I’m generally against having multiple floors as they can create more separation and isolation. But Galvanize has the luxury of having several floors while physically having them feel connected because of cutouts in the upper floors and staircases that connect the levels in a visually prominent way.

Check out our second interview in the series, How We Work: Galvanize, The Startup Hive, and our third article, How We Work: Humanitarianism Meets Tech and Art at Swissnex.

Andreanna Woodhams is an artist majoring in business administration at the University of San Francisco, interested in illustrative design, fine arts, and entrepreneurial thought. Andreanna was a student in my Creativity, Innovation and Applied Design class, where she was a key inspiration toward the development of a more visual, collaborative style of team prototyping and brainstorming.

Entrepreneurs lend us a fresh perspective on our own projects and companies. They help us think broadly and make new connections. Here are a few ideas that the journey of Allan Young and Runway bring to mind.