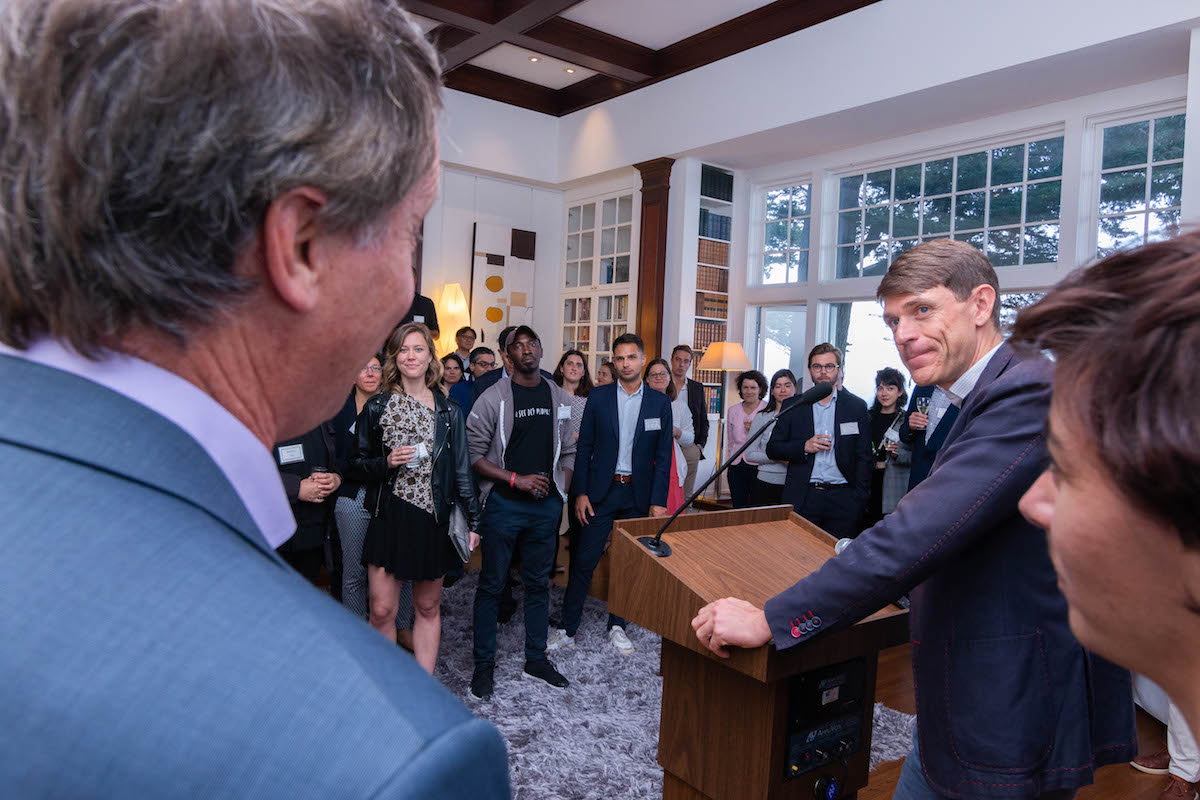 Art, culture, business and technology bind the French-American tech community here in San Francisco, and it was at this felicitous intersection that a couple hundred entrepreneurs joined at the residence of Consul General Emmanuel Lebrun-Damiens last Monday night in San Francisco. Florence Tison, Managing Director of Business France, a government agency that supports French startups in funding and scaling efforts in global markets, introduced the panel on innovation and entrepreneurship in Silicon Valley.

But while everyone shared a tacit understanding of the greater access to capital here in Silicon Valley, other metrics remain nuanced. Coopersmith engaged the audience with some entertaining and illuminating statistics. “It’s no secret that San Francisco is more expensive than Paris,” he began. Two to three times more expensive. “A one-bedroom apartment in the city center in Paris is about $1,250 a month. In San Francisco that same apartment would go for $3,400.” Here in pricey California, he added, a loaf of bread is twice what it costs in Paris (and doesn’t compare in quality). Coders too, he noted, are far cheaper in France: “$55,000 in Paris, versus $120,000.”

Wine and champagne flowed freely among the French entrepreneurs as they nibbled on cheese puffs and pâté and pondered their decisions to live in one of the world’s most expensive cities, while taking in a sweeping view of the entire Bay from the stylish mansion atop Parnassus Heights. A signed photograph of President Emmanuel Macron – a vital proponent of France’s strong commitment to entrepreneurism –  greeted guests at the entrance, amid fine art, designer décor, and the air of cultured living.

The Place You Cannot Not Be

Coopersmith convened a successful French startup founder and investor to tackle the tricky topic of where to launch and scale. Fred Plais, CEO of the EU-based cloud software startup Platform.sh, described San Francisco as the place “you cannot not be … you have to be there,” explaining that he’d made a strategic decision to relocate. It’s about visibility, and the concentration of talent, capital, and key players in the ecosystem. “I started in Paris and I moved to the US and I would probably do it again.” Even though his company is global, with “135 employees across the world in 17 different countries and probably a hundred cities mostly working from home,” the US positioning raises his profile. Meanwhile, as a European company, he was able to qualify for a €2M grant from the EU, key to the early, lean years: “That was a game changer,” he told the crowd. “There is no way that I could have started the company without the grant.”

That EU funding was also a crucial factor in Partech’s decision to invest last year when the firm led Platform’s $34M Series B round. Partech partner Réza Malekzadeh said that EU grants “are the best” because they take no percentage. Such non-diluted equity is rare in US-grown startups. Malekzadeh added that it’s also easier to scale and achieve wide market share here in the US. “In Europe, you have a very fragmented market with different languages in different currencies,” he said. Whereas in the US, with just one currency, one language, and a population of 330 million, “your efforts to reach that market are going to be in a way easier.”

Procuring talent with essential on-the-ground experience in scaling is another compelling factor for French-American startups, said Malekzadeh. In Paris it’s rare to encounter people who’ve lived through an IPO, but it’s common in San Francisco, where “people will tell you, ‘I was at Pinterest between zero and IPO’ or ‘I was at Uber from 100 employees to 2,000 or 3,000.’ That’s huge here.” He added, hiring more experienced talent is “super expensive, but super important because as Fred [Plais] goes from 100 to 200 to a thousand employees, he’s going to have challenges on the operational side that have nothing to do with his technology, that have everything to do with building and operating at scale.” When it comes to scaling up toward an exit, “the US still has a very, very clear advantage. You know, 80% of technology exits [globally] are here.”

But then the conversation circled back again to quality of life: taxes, education, and healthcare –all of which knock back entrepreneurs significantly once they commit to living in the US. “Once you take all of that into account, actually I’m not sure that the $55,000 engineer lives less well than $110,000 engineer here,” Malekzadeh concluded. “There’s something about the lifestyle.”

Indeed. And with that, the French techies returned to their champagne, hors d’oeuvres, and conversation.