Parking Lot of Dreams (Part One) 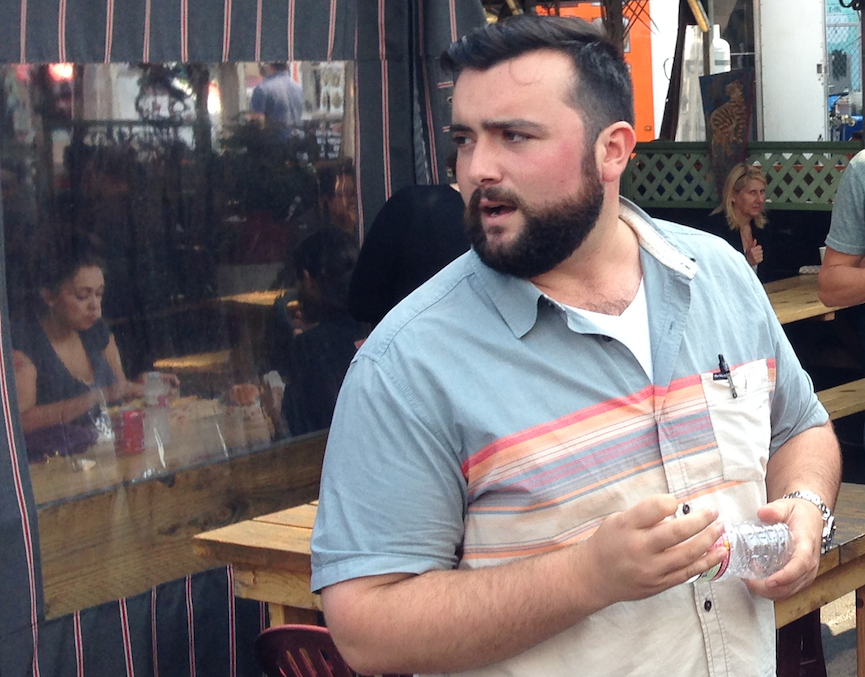 He began at the age of eight years old cleaning up in a couple of Spanish restaurants in San Francisco’s Mission district. By fourteen, he was a waiter. By seventeen, he had risen to manager, and might very well have continued on this trajectory in the traditional restaurant world, had he not enrolled in an entrepreneurship program at the University of San Francisco. Instead, Carlos Muela discovered a homeless encampment infested with rats by a freeway ramp, and there found an opportunity to create something remarkable in the city’s bustling world of food.

Carlos was destined to be a restaurateur. His parents owned the popular tapas restaurants Picaro and Esperpento, so he was already in place to take on the family business, but exactly what he’d pursue in the business was unclear. At USF, Carlos majored in entrepreneurship and hospitality while simultaneously logging 40+ hours a week managing the family’s restaurants, doing bar inventory, buying supplies, and coordinating “the staff and flow of the night — 200 people with reservations — planning out the entire evening.” Carlos was good at handling pressure.

He also had dreams. “I wasn’t going to be doing what my parents had done. I had a million ideas, and my father had his crazy ones.” They talked often of creating a San Francisco-based twist on Madrid’s famous Mercado de San Miguel. “One of our many ideas was that we should do a market hall,” said Carlos, who at one point was considering leasing a huge 20,000-square-foot space and slicing it up into tiny units to be subleased to small vendors.

Fortunately, Carlos came up with an even better idea. Food trucks were starting to take off, and by chance, a friend had an empty lot in San Francisco’s Mission District. Sensing opportunity, Carlos began frequenting Off the Grid events in Fort Mason and various Bay Area farmers’ markets. He talked to food truck vendors, and learned that many were struggling. City regulations required them to operate on private property, and they needed more days than the farmers’ markets and Off the Grid events could provide. “There were all these food trucks with nowhere to go.”

Carlos found inspiration during a trip to Portland, Oregon. “They’ve got these pods or parks with food trucks,” he said. “The weather is terrible and the population density is nothing like San Francisco. If they can thrive in Portland, I thought, they could make it in San Francisco.” Due to zoning issues, the empty lot in the Mission wouldn’t fly, but he found a diamond in the rough at 11th and Harrison. “It had a bunch of old U-Haul trucks and homeless people. There were huge rats, garbage, and strung-out drug addicts.” Yet Carlos also noted that it was across from a cavernous parking lot for several big box stores, and near Zynga, RDIO and Pinterest. After negotiating the price down several thousand dollars, Carlos signed the lease, and the stress began piling up immediately. Since he wasn’t erecting a traditional building, the city didn’t seem to know what to do with him. “Going through all the permits was hell,” he said. “It was like a never-ending story.”

A year later, with rent and architects’ fees stacking up, they still weren’t open. He bought a prefab “barn” for $7,000, built bathrooms, brought in a yellow school bus, hooked up water and electrical, and dropped in some palms and plants, and “a million other things.” In the spring of 2012 they finally raised the SoMa StrEat Food Park sign, and word travelled fast. The San Francisco Chronicle, CBS and the Huffington Post requested interviews, and a local TV station came and starting filming while guys “were still sawing tables.” Finally, the city threw in a last minute wrench by demanding he plant $20,000 of trees in the sidewalk. Carlos wasn’t ready but he rolled the dice, and set an opening date of June 12, 2012. “It turned out to be a beautiful sunny day,” he said of that first lunch service. “We had sunny weather till the end of October. Multiple months of beautiful weather.”

SoMa StrEat Food Park was packed from day one, and Carlos faced huge challenges, not the least of them getting a full line-up of trucks every day. But the budding entrepreneur had created something remarkable by experimenting with a fresh, untested business model. He’d opened a food truck park to break the mold of restaurateur, and now he was about to find out that it was about far more than food. This erstwhile homeless encampment was becoming a parking lot of dreams, and he was only just beginning to see the possibilities.

Read Parking Lot of Dreams (Part 2) Carlos improvises to meet demand at SoMa StrEat Food Park, and urban planners come calling from Norway and Australia. Carlos begins to realize that his food truck park is a big, novel concept, and then the financial guys fly in and start doing graphs and numbers and the 26-year-old gets an offer that’s hard to refuse.

Read about Prototype: Food Truck Style.
This is a story about McCall Vollum, a twenty-five year old “not living anywhere” who chucked her high-paying Booz & Company consulting job, flew out for a San Francisco weekend, and promptly launched a startup.