Portal to the Future: Alexander Rose and the 10,000-Year Clock 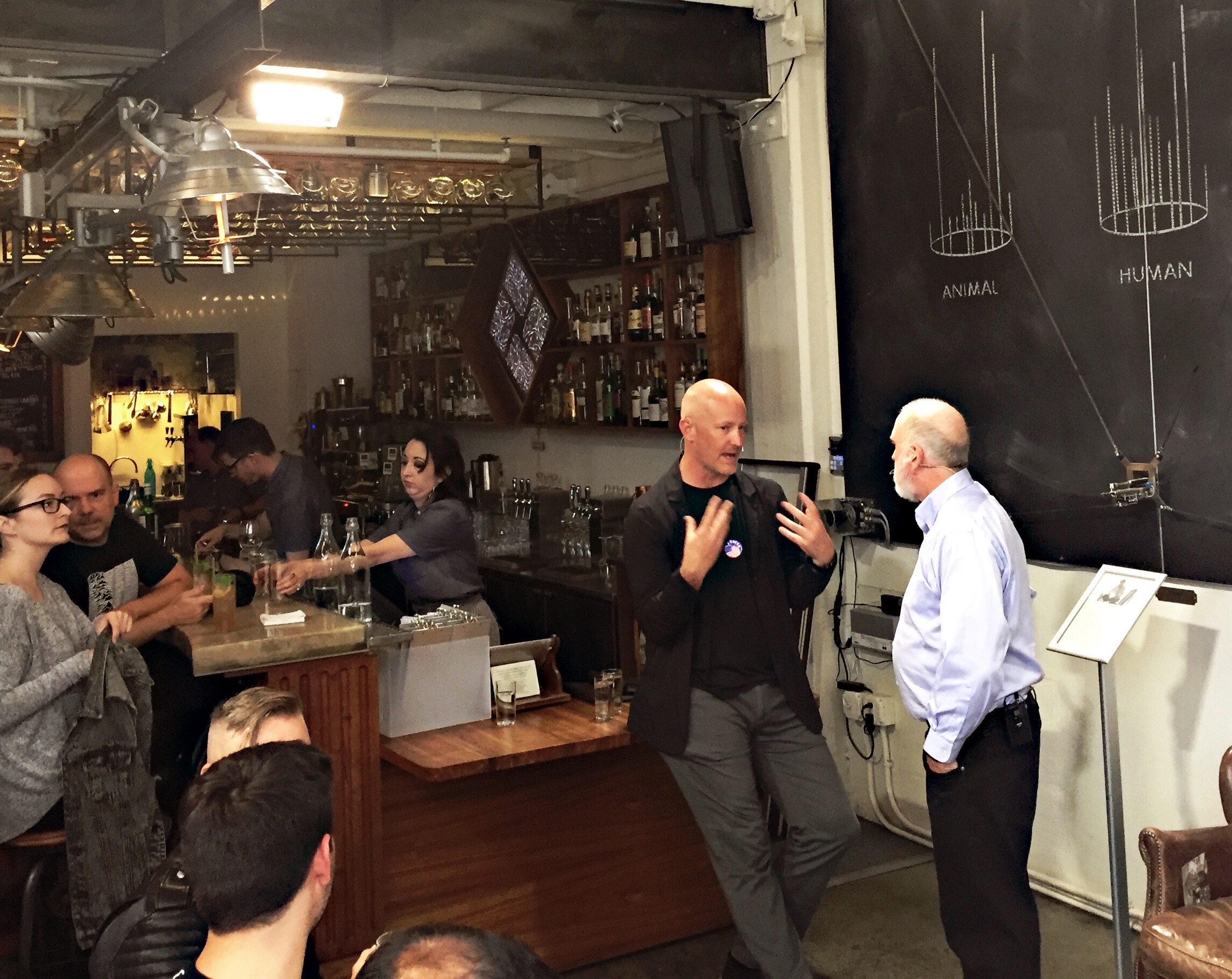 Alexander Rose and his team have spent the last 20 years building a clock. Not just any clock, but a monumental 200-foot-high clock buried deep within a mountain. This clock will last for 10,000 years, and poses a question: What might we do differently if we begin taking responsibility for the next ten millennia? Welcome to The Long Now: a far-reaching band of technologists that is helping us to define the future of the future.

Alexander runs the clock project and other Long Now ventures from his office above the waterfront San Francisco bar known as The Interval. This futuristic salon is itself a window to tomorrow, a liminal space that evokes the clock and other icons of futurism, where the tech cognoscenti (and the public) come together to celebrate long-term thinking.

Jeff Bezos is a central figure. He provided the mountain in Texas, and is participating in the design of the clock. Long Now Founders include luminaries from technology’s old guard: Stewart Brand (creator of the WELL and early cypher for the digital revolution), Kevin Kelly (the original executive editor of Wired and author of numerous bestselling books on digital technology), Danny Hillis (computer scientist, mathematician, inventor, engineer, author, and visionary, who pioneered the concept of parallel computers). Members include a long list of accomplished technologists and groupies who regularly convene for presentations on the Future of Technology, The Extreme Present, Superforecasting, and more. The prolific brainpower generated by this group is proof that the movement is catching fire: start thinking about long-term thinking, and the possibilities are exponential.

The idea for the clock was first reported in a special edition of Wired in 1995. In “The Millennium Clock” Danny Hillis proposed to build a clock that ticks once a year: “The century hand advances once every one hundred years, and the cuckoo comes out on the millennium. I want the cuckoo to come out every millennium for the next 10,000 years.” The clock is a symbol of faith in the future. When Alexander first heard about the clock back in 1995, “it was the first story of hope that I had heard in a long time.” He grew up during the Cold War, when everyone was worried about the red telephone and the finger on the button in the silo. But Alexander doesn’t believe the world is going to end in nuclear destruction, or, that we are doomed to a boiling frog scenario of global warming. “It hasn’t occurred to most people that humanity will be around for 10,000 or even 1,000 years. They’ve been sold a dire view of the future. But if you really look at what could end civilization or all life on the planet, it’s maybe a comet. Or a nuclear event. That’s about it. Climate change? Not gonna wipe out the planet. It could certainly reduce the carrying capacity and our quality of life. It could change things drastically, including how we live on the earth but it is not going to take out the earth … or take out humanity.” Stewards of the Earth

Alexander’s logic is critical: When you believe in global Armageddon you stop being a steward of the earth because you feel powerless. But come around to the idea of being a charitable ancestor to your progeny 10,000 years from now, and your sense of responsibility changes. You become more optimistic, and also more careful. Alexander wants us to consider: “Am I creating options for the future, or taking them away?”

The clock stands as an icon to sustainable practices and a fervent belief in the resiliency of life on earth. As Stewart Brand describes it, the goal of the Long Now is to “hack civilization” so that we can get long-term thinking to be “automatic and common rather than difficult and rare.”

But the clock is more than conceptual. It’s under construction, thanks to Alexander and his talented team of engineers and builders. The stars aligned in 1995, shortly after Alexander graduated from Carnegie Mellon with a degree in Industrial Design. A self-taught engineer, artist, and builder, he had grown up on the funky Sausalito waterfront (known for its artists, sailors, and free-thinkers) across the bay from San Francisco. Alexander knew another Sausalitan, Stewart Brand, and it was Brand who invited him to the foundation’s second board meeting at Doug Carlston’s (founder of Broderbund) ranch in Colorado, to create 3D visualizations of the conversation. There, Alexander designed the first prototype for the clock. He soon took over as Project Manager of the clock and Executive Director of the Long Now.

The first task was to find the perfect site. Building above ground “in the positive” was rejected early on due to obvious issues of fallibility. The team knew that they wanted to put it underground, but it also had to be accessible for building, maintenance, and visitors. They were able to purchase some land in Great Basin National Park. Alexander is a skilled rock climber, and scaled the long sheer face of an 11,000-foot mountain they were exploring. (Danny Hillis opted for the road to the top.) But they ultimately settled on a second site located deep within a remote limestone mountain near Van Horn, Texas, on land owned by Jeff Bezos, who among his many contributions to the project, is also underwriting the cost of construction.

Monumental in scale – roughly 200 feet tall, dropped into a shaft 12½ feet in diameter and 500 foot deep, with counterweights that weigh 10,000 pounds – the clock is meant to transfix and transform visitors. Constructing something to last for millennia is an intriguing design constraint. There are geologic concerns: how to protect the site and the clock itself from the elements. Time is a factor, as there are no bearings – metal, ceramic, or any other currently invented material – that will not wear away over the course of time. Power comes from harnessing solar thermal change from an air tank designed by Hillis and the engineering team, including an algorithm to factor in the earth’s rotation over the next ten millennia. Vandalism is also a probability: they have considered applying an “ablative” element designed to be stolen. Finally, there are aesthetics. Intriguingly, a good way to build something that lasts is to take your time building it, explains Alexander: “It needs to pass over the ‘chasm of unfashionability’ during which things are typically destroyed.” Twenty years on, they seem to have a good handle on this last concept, as there is still no estimated completion date.

Other Long Now initiatives are equally thought-provoking in their dedication to sustainability. The Rosetta Project has archived over 1,500 languages and 13,000 pages of language documentation, etched into a spiraling globe of engraved pages and immune to platform obsolescence, as the entire catalogue can be read with standard optics. The Revive and Restore project is dedicated to using genetic engineering to bring back extinct species and preserve endangered ones. Long Bets is a public arena in which Warren Buffett and others place predictions on issues “of societal or scientific importance.”

At The Interval, artifacts from these projects are prominently placed throughout the eclectic space. “Every surface and every object is a question that you can ask to see a deeper story,” Alexander told me. “You can’t tell people to think long-term but if there are interesting objects around that they can ask or talk about, they begin to share their own thoughts about why long-term thinking might matter to them. The Interval gives them a touchstone and a place and a reason to have that conversation.” An electronic “painting” by Brian Eno illuminates the wall behind the bar, a mesmerizing piece powered by regenerative software code that produces endless and non-repeating patterns. On the adjacent wall, Jürg Lehni’s “Otto” the drawing robot launches into a new 10’ x 10’ chalkboard design that is related to the evening’s talk. Suspended overhead are flasks of whiskey and other spirits, infused with juniper berries and bristlecone pines from the foundation’s Nevada site. As Alexander points out, “the 10,000-year history of civilization is also intimately intertwined with fermenting beverages,” which seems as good an excuse as any to organize the project around the social elixir. Coffee is also available, and during the day, the Interval doubles as a co-working space, part of San Francisco’s trend-setting approach to where and how we work and think and play.

In San Francisco, the land of hundreds of incubators and quirky cafes, a city deeply invested in the instant entrepreneurship and fast money of the here and now, the Long Now at The Interval provides a counterpoint to our accelerating culture. This novel brand of optimism is not about the fleeting present. It’s about long-term preservation, moral responsibility, building sustainable tools, architecture, and technologies to solve the looming problems of the future.

“If you are only paying attention to the fast, you miss the problems that can only be achieved if you look at it on a generational time scale,” says Alexander.

What would you do differently if you started taking responsibility for the next 10,000 years? Come find out for yourself at The Interval’s portal to the future.