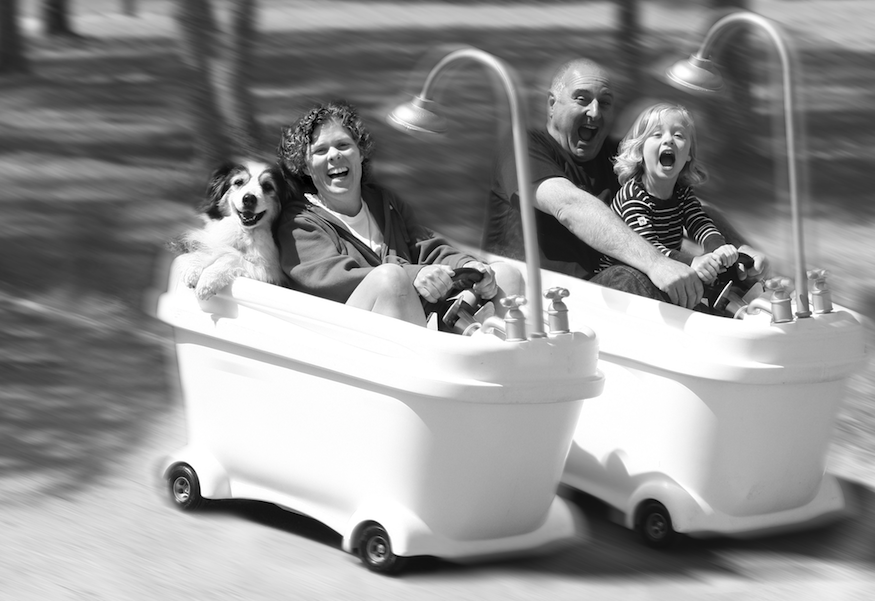 Divorce and summer camp do not typically spring to mind when we think of entrepreneurs. But Steve Susskind turned those radically different seminal experiences into grist for his life’s work. Today, he’s leading an unusual organization that excels in prototyping, experimenting with technology and experiential design. Steve is developing software for music and animation production, and was recently approached by a team of Apple engineers to study how his staff deploys iPads. He’s exploring breakthrough point-to-point distribution concepts, and environmentally sustainable “one-time” furniture. Steve has tapped into a wellspring of creativity. He’s the founder of the rapidly expanding Steve & Kate’s Camp, an outlier threatening to revolutionize how kids (and adults) discover, adapt, and thrive.

Steve has always been intrigued by people who don’t fit in. In high school, he volunteered in a hospital for kids with physical challenges, and spent a semester at the Perkins School for the Blind in Boston, Massachusetts. His parents split up when he was nine, and he was the only one in his class with divorced parents. Camp in upstate New York was the one constant. “I went all summer, every summer. I loved it,” said Steve. “For me it was not just liberating from school and parents. It was living with your peers and having to resolve conflicts.” Steve enrolled at Cornell University to study child development, and then took a cross-country trip to Marin County, drawn to the area by stories about a new generation of “latchkey kids,” a 70s-era term to describe the prescient self-reliance of the children of the divorced, who grew up independent and let themselves in after school.

One day, Steve’s landlady asked him to pick up her kids from day care at the local public elementary school. Wandering around the school grounds, he stumbled upon a piano. A few days later, the principal called him in. The kids had told their parents how Steve had put on a performance, juggling and doing magic tricks for the kids, and they’d loved it. Steve was not a trained musician, but the principal insisted on hiring him as the new music teacher. Steve agreed on the condition that he’d have free reign, and so Steve began doing not just music, but “puppetry, magic, a lot of storytelling,” even teaching the kids Rapper’s Delight. Then it dawned on him: the school was vacant during the summer.

Steve’s Camp, founded in 1980, was designed with a simple yet powerful concept –– getting out of the kids’ way. “For me it’s much more about the kids’ starting to use their own judgment. They’ve got a lot of ideas. It’s about giving them choices, learning to course correct.” This eventually developed into a guiding philosophy: “Our camp conforms to kids, not the other way around.”

Activities were designed around campers’ learning to express themselves and explore their passions and potential in the arts, performance, sports, and recreation. Steve sought fresh products, technology and experiences designed for the kids. His was the first camp to feature “Kangoo Jumps” jumping shoes. They brought in an inflatable bouncy house, and had kids drive electric Bathtub Racers. They adapted a local invention, the “Batting Buddy”, to help kids learn to hit baseballs. Steve didn’t want to mimic standard sports, so his team designed an inflatable, mini soccer arena. “You’d touch the ball more, score more,” he said. “The goal was bigger.” He did the same for tennis, shortening the court and using low compression balls to make it easier to learn how to control them. “With a lot of sports, kids should be at an advantage,” Steve said. “But most sports are not scaled for kids.”

Technology and self-expression were early core elements. Over time, the camp would develop half a dozen art and technology centers for music, fashion, bread making, animation, dance, filmmaking and coding. Kids could design custom web apps, choreograph music or dance videos, even make their own denim jeans. Steve named them “Studios” to capture the sense that this was a place to “explore without limits” and create with “state-of-the-art tools and equipment.” Tellingly, that’s the same way IDEO and other top innovation firms often name their different practices.

Observation was how Steve and his staff adapted and evolved. He learned that what thrilled the kids was often not the same as what the parents wanted. But, at the same time, Steve wanted to offer parents freedom. “Weekly or monthly (camp) sessions were very limiting,” he said. “What happens if you are a nurse, and you want to send your kid for just three days a week?” So, Steve’s Camp offered flexibility. “Parents can sign up for any number of days. We give them the flexibility to use these days whenever they want. Then, at the end, give them the money back” for any unused days.

The model worked. Steve married Kate, a graduate of Stanford, and by 2005, Steve & Kate’s Camp was hosting nearly 400 kids a day during the summer. They see eye to eye on almost everything, but initially Kate didn’t want to add campuses. They already had a hit camp. Apple had featured their innovative use of Macintosh computers on its website and camp reviews were excellent. Why change? But eventually they both saw that by getting bigger they could get a lot better, and “offer a career path” to keep their talented staff.

What they didn’t expect was that their summer camp would scale and spread across the country. Steve & Kate had already disrupted the traditional summer camp model. The next phase would be about designing something far bigger, a radically new kind of learning and prototyping organization with the potential to redefine the way we think not just about kids and play, but also about how adults work and thrive.

Coming next week – Startup Camp (Part 2)
Startups need to scale to succeed. Several books have been written on the topic. It’s hard to do. Most fail. The odds were against Steve & Kate’s camp…