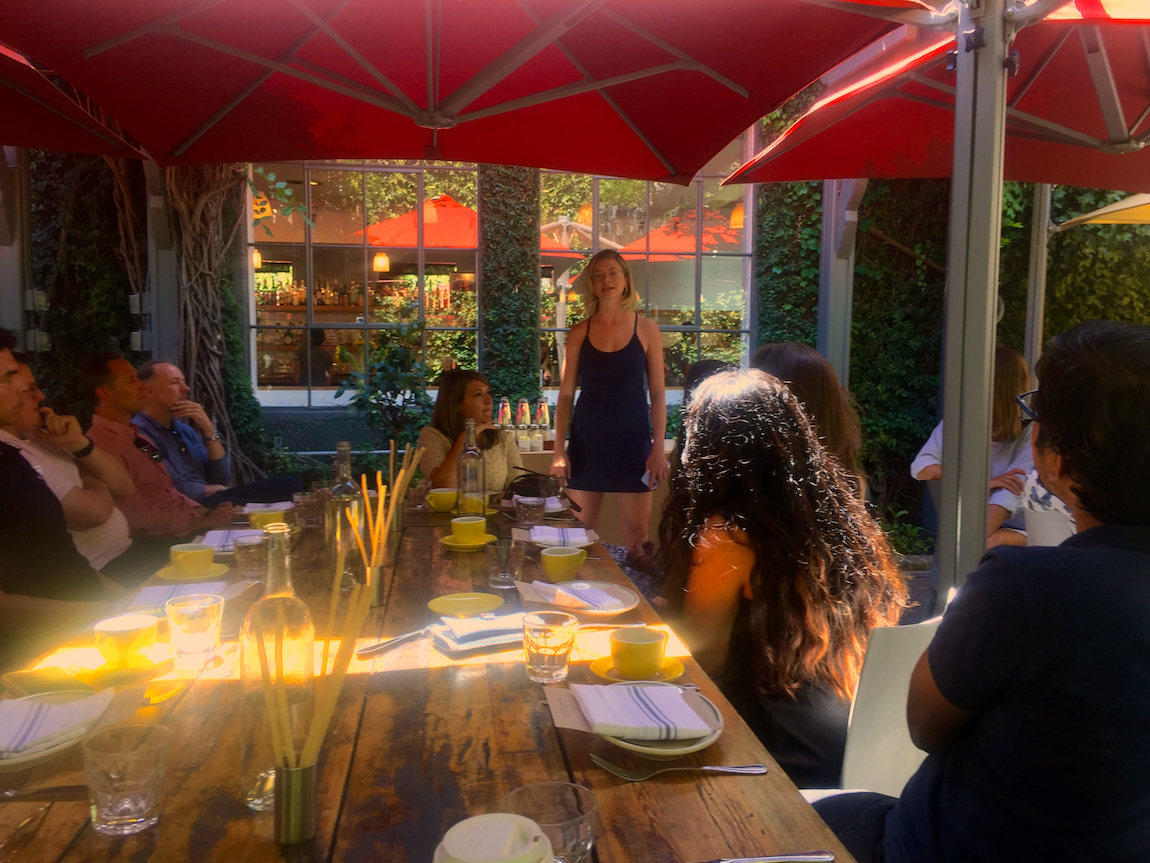 Launching to Learn was the takeaway from last week’s final class in the tenth batch of the remarkable Stanford Launchpad college accelerator. Success was in the air. The talented student teams led by Stanford adjuncts Perry Klebahn and Jeremy Utley have raised more than half a billion in investment and birthed dozens of thriving corporations in the past decade. During a whirlwind ten weeks, student teams meet for twice-weekly experiential business challenges at Stanford’s d.school to prototype their product, find target customers, make sales, incorporate, and ramp up faster than they imagined possible. This year’s crop featured star teams in fashion, FemTech, sports, and more. A few have gained initial funding. One has already hit more than $100,000 in sales. Guest alumni John Beekman, Liz Grace, and Annie Stancliffe made an appearance at the closing celebration of the current 30-strong cohort, to impart a bit of wisdom from the real world of startup founders. Here’s what they had to say about Lean Startup, knowing yourself, and understanding how to scale.

There’s a difference between someone telling you that they would buy your product, and actually paying you to use your product or service. One thing that I took away from my experience at the GSB [Graduate School of Business] and Launchpad was Eric Ries talking about selling something before you build it and getting to an MVP. The selling part is critical. You can sell almost any concept or any idea before you really do the work to make it real. Surveys and asking friends is helpful, but if you literally today could go with a Square card reader, and if someone says they would buy your product, I would whip that thing out and take their credit card.

So, that’s part of the way we started the business. On the first version of our website we ran Google and Facebook ads. You got people to come by and then they would buy. And then immediately I call them and tell them, “Oh sorry, we’re a startup and are still working on inventory issues. I’m going to have to refund your money. But tell me what it was about what we were doing that you liked.” And it was really interesting. So that’s a great cheap way of getting completely random people from New York to Kansas to California, wherever they happen to be, to give us feedback because they have already made the decision to buy so they are actually a customer.

Man Crates hit $24 million in annual sales in 2015, and taught fellow Launchpad mates an expert course in using Facebook ads and other means to test product mix and customer demand. But not all Launchpad startups hit it that big. One of the three speakers that day brought a radically different perspective. Explained Utley, as he introduced Liz Grace to the students: “Liz is an interesting case of a founder who decided she was going to dedicate herself full time through her business, and then after two years running, she decided to shut down her business. And that’s a reality for some of you. One of the things that we’ve been criticized in the past for is not bringing in the perspective of, “What if I don’t keep doing this?” The reality is not all of you will, and that’s not a failure and that’s not a bad thing. So we sought out a founder who we think made an absolutely 100% good faith effort on building a business and then decided to make a change partially due to the business, partially due to life circumstances because that is a realistic outcome for some.”

On Knowing Yourself (Liz Grace, Founder of Grace Portraits, a service for ordering hand-drawn custom portraits)

Here’s what I would do differently. I would have connected more. Even though this was going really well, and I was committed to it, I was one foot in, one foot out. I raised $100,000 from a friends-and-family round and that’s it. My goal initially was to get to profitability. I did that, which is great, but then one of the first things I would have done in terms of committing is: I would’ve hired, I would have raised more money, and done more marketing.

I would’ve talked to a bunch of entrepreneurs, gotten all of that advice … and there’s also the third piece, which sometimes you don’t really talk about as much.

That third piece? Team. Well after her startup journey with Grace Portraits began, Liz took the famous Enneagram personality test. She wished she’d done it earlier. Once she was able to recognize her underlying patterns of thinking and driving passions, it all became clearer.

I’m talking about my motivations versus if I had taken that test and really understood myself and what motivates me as a human when I started the business. That would have made a big difference. I’m a three [The Achiever: success-oriented and driven] and I know that I need to have someone to bounce ideas off. So I would’ve been a lot more aggressive about getting a co-founder or even someone who doesn’t even need to be a co-founder, just a founding team member.

Self-reflection, the recognition of one’s own strengths and limitations, and the ability to attract a diverse, complementary talents are key to creating a winning team, a well-known metric of success in Silicon Valley. Many investors say team is their number-one criterion when considering whether to invest in a startup. We agree. Familiarize yourself with the various instruments available for identifying individual and team strengths.  [If you’re curious about how a human-centered model can accelerate teams and startups, please say hello. That’s a large part of why we’ve been chronicling Launchpad. It’s the subject of our upcoming book and workshops.]

I have this analogy in my head about baking a cake. The first year is about figuring out this recipe for your gooey Carrot Cake. How sweet should it be? What time of the day do they get to eat it? When do they get to buy it again? OK. So after a while you’ve got a 90 percent good recipe. You’re running experiments, figuring out who’s interested in eating your cake. Who’s that person? Then, you’re baking a perfect carrot cake every week. And people want it. It’s great. It’s become kind of comfortable. It’s cool. You keep your ear to the ground. You’re experimenting, figuring out what to tweak. You get to a 92 percent, 95 percent perfect recipe.

Then your next big challenge is to figure out how to make a hundred cakes a day. That’s an entirely different set of challenges. That requires different people. That’s when I made my first hire and found my operations lead. Instead of figuring out the perfect recipe, now it’s where should we be? How many ovens do we need? How can we hire some bakers? And it’s just scary, because the stakes are higher. And guess what? You’re going to have to make some bad cakes. It’s not going to be precious anymore.

Besides bringing her mobile salons to dozens of Bay Area companies, Annie is about to open her first fixed High Five salon in San Francisco. She told the students that a year ago “about 100% of everything I ever did was brand new. Like literally I’ve never done this before.” Now she says, it’s around 60 percent.

That’s an awesome feeling of progress.

Applications for Launchpad 11 open February 1, 2020. Pre-launchpad office hours – the Venture Hub – begin in early January, and serve as part of the required audition for the April through early June class. Klebahn and Utley accept roughly ten teams from the applicants. Not sure you’re ready to dive into launching your own startup? Students can also apply to be apprentices, and get startup experience helping out on one of the teams. Mid-semester, at the end of April, the public is invited to a massive open house held in the d.school. Don’t miss it.