Why Every Startup Needs To Sell Lemonade 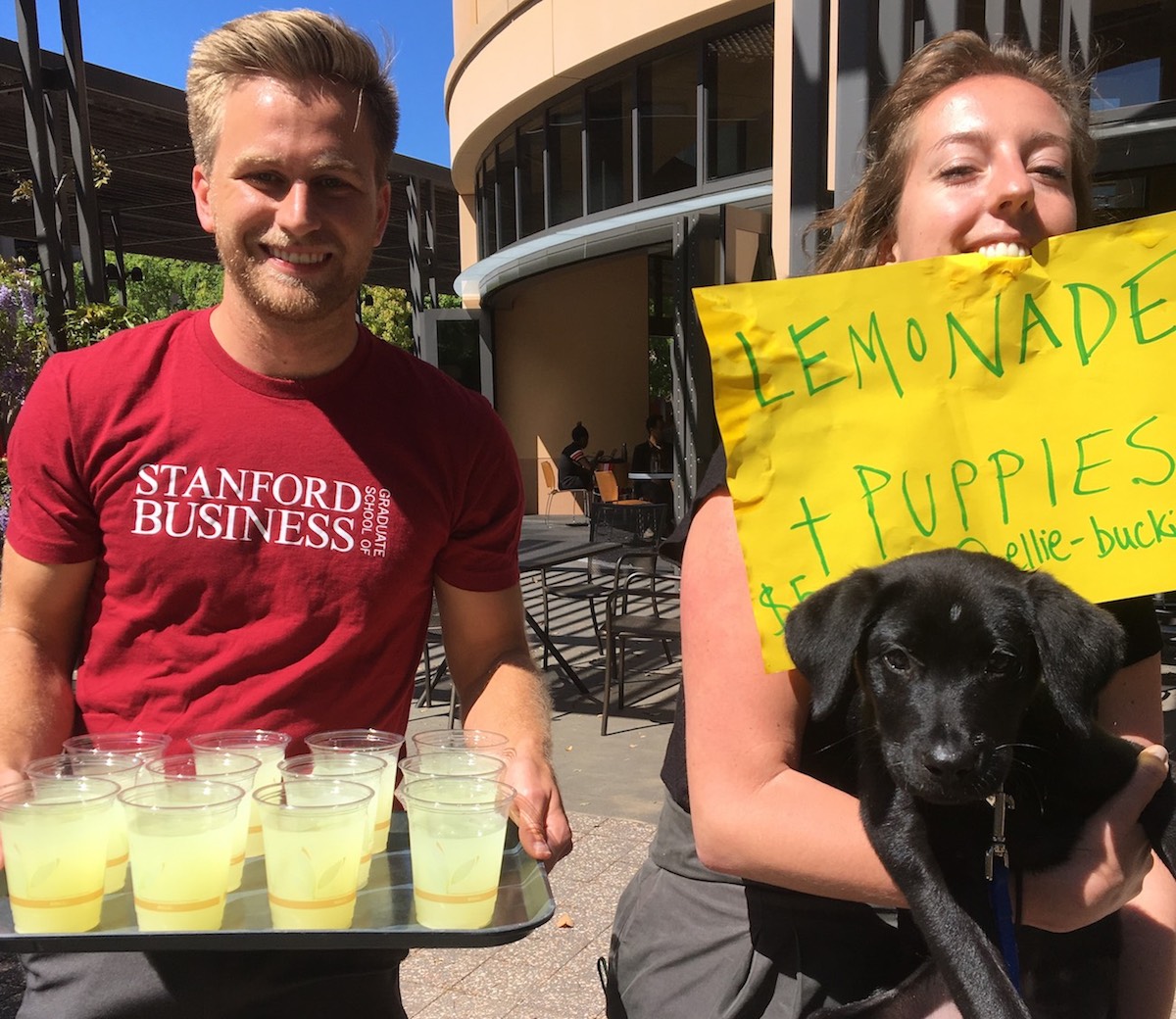 The Stanford Launchpad startup teams circled around adjunct professors Perry Klebahn and Jeremy Utley in the d.school’s Studio One. On the central whiteboard each of the dozen squads had penned their startup sales. The professors then laid down two long stretches of blue painter’s tape on the floor and instructed the students. Move to one side if they’d made a new sale since the last class. To one corner if they’d made “sales with some kind of significant change.” Those who had come up empty crossed over to the other side of the blue line. The numbers on the board amplified the widely disparate progress of the startups – from zero dollars in sales, to a few thousand, to the top two squads at $22,500 and $47,000 respectively. But they were all about to experience a master class in selling. The professors pulled out the big reveal: hidden behind the whiteboard were bags of ice, pitchers, cups, and crystalized drink mix.

The puzzled students laughed and processed this surprise. Yes, they were going to sell lemonade. Right now. Here was a radically different startup competition. A 60-minute test of their naked ability to sell. “The winner of the challenge? Whoever has the highest integer in this column,” Jeremy said, pointing to a column on the board for the lemonade sales, “takes all of the money from the entire class. That money has been between $2,000 and $4,000.” Game on.

Learning by Doing … and Playing

Doing – not planning – was the order of the day. Instinct, initiative, and creativity. Minutes. That’s what the professors gave them. Five minutes to cook up a strategy. Five minutes during which the teams took to the floor, huddled together, and designed signage.

Launchpad is an accelerator masquerading as a college class. Under 40 hours of class time. Twenty classes spread over just 10 weeks. Through a keep-you-on-your-toes blend of straightforward and metaphoric tasks, student teams cycle through rapid iterations and product development. It works. Launchpad teams have collectively raised half a billion dollars in capital and birthed dozens of successful companies in just nine years. Lemonade sales day is one of those metaphoric assignments, one of those exercises that prepares the budding startups for the second five weeks of the accelerator, that point at which they fully put their fledgling business to the test.

Selling lemonade? These are graduate business school students … computer science majors … PhD candidates. What could they possibly learn by such a silly exercise? This: that it’s a dog-eat-dog world. That speed counts. That there a hundred paths to success. That they must break with convention. And that, sometimes, winners take all.

At 11 o’clock sharp, the teams scooped up their pitchers, bags of ice, cups and lemonade mix, and dashed out of the d.school building, running and biking to multiple locations across the sprawling, sun-drenched campus. Fairplay, a team working on providing royalties for visual artists, set up nearby, outside the cafeteria. “Support the Arts!” shouted their sign. They were enthusiastic, but it was slow-going. They asked for $5 a cup, and after multiple rejections notched some $3 sales. A team of athletes sprinted down to the main campus entrance, where they found a few fellow athletes and made a more aggressive pitch for $10 or more – via Venmo. Their approach was to solicit donations to support their FemTech startup Tampro (barely mentioning the lemonade). Meanwhile, back outside the cafeteria, Ciro di Lanno, a Stanford MBA creating Ailati, a marketplace for the luxury handbags of Italian artisans, showed a natural flair for making a quick, focused pitch. His best customers for $3 cups: tables of girls, and Stanford workers. Nothing was wrong with these teams. They just didn’t stand a chance.

At high noon, groups reported back to Studio One. Up on the board, the teams recorded how many offers they’d made, the conversion rate, the total sales. Bottom of the class was $3, a few teams just under $100, one over $200, and then, remarkably, one team clocking in at $656. At this point, Ellie Buckingham walked to the board, and penned a figure that didn’t seem possible: $2,270. An audible “ooh” swept over the classroom.

How did they do it? Teamwork. Imagination. And, not selling lemonade. Ellie and Miri Buckland of The Landing joined forces with Andrew Powell and Sasha Seymour of Learn to Win. (The Landing is creating an end-to-end solution for the experience of buying furniture for an apartment. Learn to Win is a platform for college coaches to quiz their athletes on plays.) Neither startup had intended to form a combined team, but when both teams found themselves dashing over to the same destination, the Graduate School of Business, they knew it would be wise to merge.

Here’s what happened at the GSB. They set up their stand, and got creative. Miri Buckland’s friend had a puppy. Andrew Powell grabbed a speaker from his dorm room. Sasha Seymour blasted out on the local Slack channel: “Puppies and Lemonade in Town Square. We are in a competition to sell as much lemonade as possible in the next hour. Exclusive offer must come fast!!” The social media campaign quickly grew legs, as they cranked out tweets and FB posts.

They were selling for $5 a cup at a fast clip, and then a Stanford employee told them they were violating a rule. They couldn’t sell on campus. What to do? “We decided we’d take donations,” said Ellie. “So there was no pricing.” Obstacles can be sparks for the entrepreneurial. Being shot down often turns into a blessing in disguise. “It was just choose-what-you-pay. It was all about supporting our startups.”

Who doesn’t like a puppy? Especially on a warm spring day, accompanied by lemonade, music, and contagious enthusiasm? Something magical happened. Someone gave $70, followed by someone giving $150. Said Ellie: “We started grabbing people who were walking to class, saying, “Please support us.” Then came a few $50 donations, one for $100, and then the game changer, “Can I put in a thousand?” It wasn’t about the lemonade. “It was this personal aspect,” said Ellie. “It was selling people on us, and our team.”

Butterfly, a music startup that took second place, also did an astounding job through clever cross-pollination inspired by co-founder Sebastien Goddijn: “I wanted caffeine. A lot of the guys in my residents’ hall go to Philz in the morning. So, I’m thinking, I’m sure other people would love some caffeine.” So the team juiced up its lemonade with caffeine powder and delivered it door-to-door in the dorms. Many students bought two or more, sticking them in the fridge for later. Butterfly had improvised, meeting customers at the right place with the right product, and pocketing a tidy profit. Astonishingly, they had a 65 percent conversion rate.

Jeremy Utley returned to the sales focus from the beginning of class, pointing to the board. “Let’s look at the comparison of our sales to date on Butterfly and your total sales of lemonade in one hour. Any reflections on that?”

The point was clear, and he drove it home. “So what’s the difference in mindset in the last hour? It was kill or be killed. What can I do to sell? To get this product into people’s hands?” And then he pointed at Butterfly’s meager actual sales of their real product. “Why is this number for Butterfly not 10X?”

Gamification fuels competition. And competition moves markets. What the students discovered in pure economic terms was that the winner-take-all aspect of the class drove them to new heights in their quest to sell, and succeed.

Today, it was lemonade. Tomorrow, their startup.