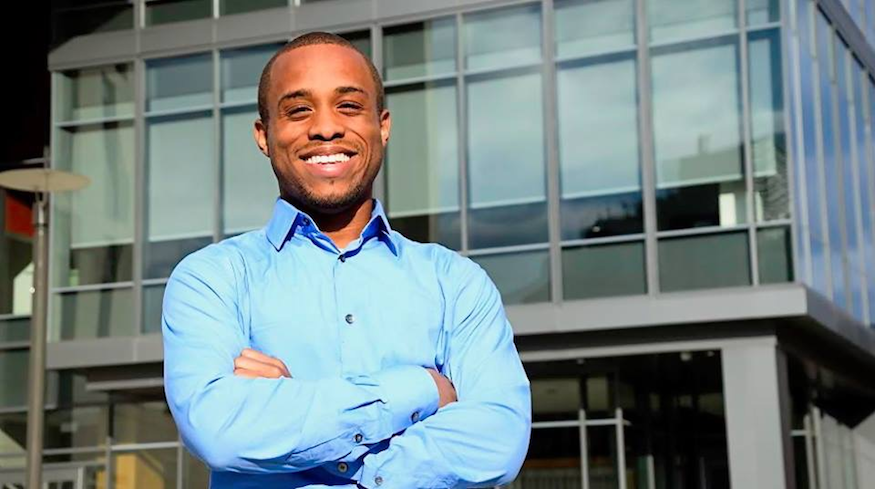 Imagine an app designed to hook you up, not with a hot date, but with tens of millions of dollars that institutions need to give away every year, an app that just might pay for your college education, and more expenses that you could dream up, and, well, you’re no longer imagining, but talking about the brainchild of Christopher Gray, the son of a single mom in Birmingham, Alabama who has once again proved that necessity is the mother of invention.

A teen business prodigy, Gray launched two startups in high school: a non-profit organization to provide volunteer opportunities for local students, and a for-profit company to organize talent shows. He was a natural entrepreneur, but it wasn’t going to be easy for him to attend the college of his choice. He’d need to find the money. He started googling scholarships at his only internet connection (the local public library) and quickly saw there was no central source of information, and no universal portal or app to get at the resources. But he spotted a potential goldmine — truckloads of cash was seemingly there for the taking, scholarships for all ethnicities and genders, scholarships for over-achievers, under-achievers, athletes, theater geeks, boy scouts, and fencers.

Gray sifted through all the free money and in seven months, he narrowed it down to 74 possible scholarships, and applied to all 74. It wasn’t long before the cash was pouring in — a phenomenal $1.3 million from 34 scholarships to spend on tuition, books, room — and a whole lot of living expenses.

Gray enrolled in Drexel University’s Close School of Entrepreneurship in Philadelphia. Fellow students, hefting huge student loans, wanted in on Gray’s secret. Gray knew that every year $100 million in scholarship funding remains untapped. He decided to help others find that gold. Teaming up with fellow students Nick Pirollo and Bryson Alef, Gray launched a mobile app called Scholly in May of 2013 to match high school and college students with scholarships based on their state, age, gender, race, GPA, and any miscellaneous talents they might have. Scholly had staked out the market and a clear path for expansion. All they needed was some startup capital. In June of 2014, Gray convinced Shark Tank panelists Lori Greiner and Daymond John to invest $40,000 for a 15% share in the company. Since the episode aired in February of 2015, Scholly has had multiple stints as the number-one-selling paid app in the iOS App Store. Scholly has already helped several hundred thousand students net $15 million in scholarships and increased nationwide scholarship application rates thirtyfold.

Government and public schools have jumped behind the promise of Scholly. My Brother’s Keeper, an initiative started by President Obama to help young men of color bridge the opportunity gap, will be purchasing 275,000 downloads. The city of Memphis and the state of Montana will be buying the app for every high school senior.

The scholarly lesson of Christopher Gray is clear. Sometimes innovation is about creating a framework for finding what’s already there, and for those who know how and where to look, there’s a whole lot to find. As for Christopher, he just earned his degree in economics from Drexel, and is bound to be unlocking more worlds of opportunity. This is one young entrepreneur who knows how to find the money.