The Canary in the Bitcoin Mine 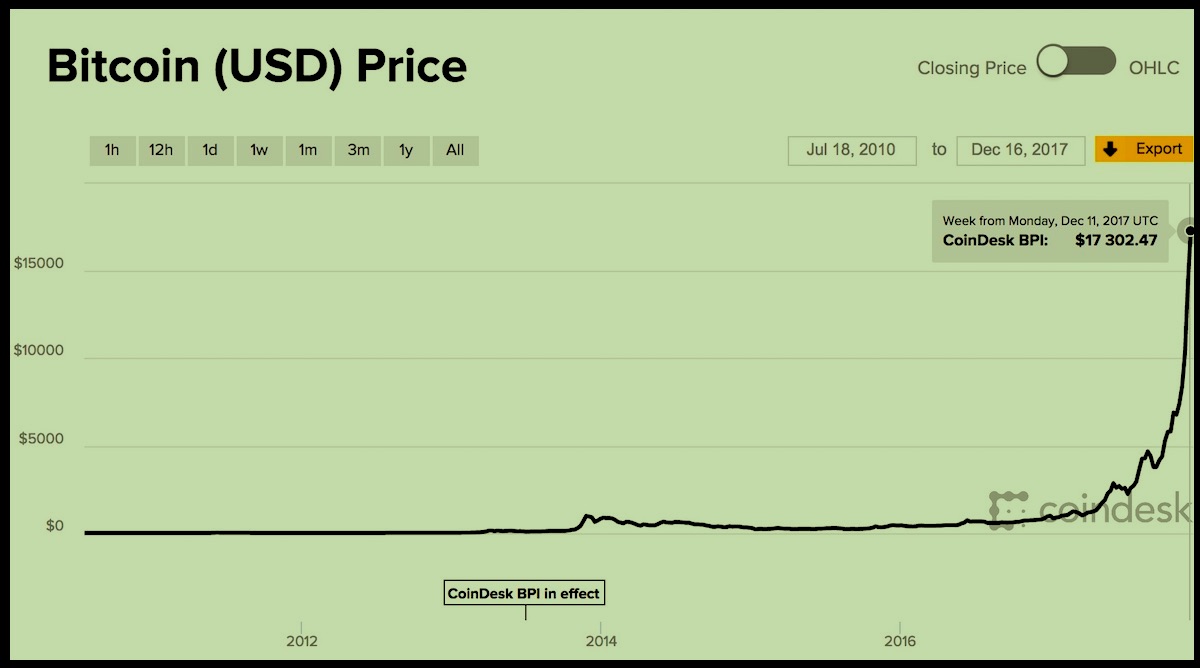 No one would call me a cryptocurrency expert, and maybe that’s why bitcoin speculators should listen. Granted, the math and technology is beyond most people’s comprehension. But this week in NYC, as the value of Bitcoin soared yet again, I saw why what goes up must go down. There are lots of old truisms about investing. When your hairdresser, or millions of individual unschooled investors in China, or a New York fashion-photographer-turned-crypto-evangelist tells you to “get in on the game”, reason says run for the exits.

While in New York for an innovation conference, I was invited to a women’s tech event, held by a “global collective of ambitious female entrepreneurs.” No, the topic wasn’t female founders, or perfecting your pitch, but the mania of the moment. The event blurb teased: “Interested in getting into the crypto game?” Thirty or so women (and a couple of men) came together in a swanky co-working space for the media, fashion and design industry (no hoodies here; everyone was slim, gorgeous, dressed to the nines) near Madison Square. Two lanky blondes in fashionable, form-fitting leggings took the stage, one a cryptocurrency “industry expert”, who just happened to be a fashion photographer and marketing consultant by trade, and the other a technologist with experience in managing blockchain projects. The theme of the talk: “It’s not too late!”

The first blonde bitcoin expert never quite shared her credentials. We did learn that she was a fashion photographer, that she’d heard about cryptocurrency a few years ago and invested a small amount but “kind of forgot about it until this summer”, when she came up with the idea for a token-based platform to match modeling talent with brands.  She seemed giddy about how much she’d “made” by buying – and not selling – her bitcoin (never quite sharing how much she was talking about). She exuded confidence. She was looking for converts.

“I always advise people, but I’m not a financial advisor, and this is not financial advice, this is just what I do,” she said, sounding very much like someone who shouldn’t be giving financial advice. “50% Bitcoin, 25% Ethereum, 25% Litecoin, and don’t invest more than 10% of what you’re willing to lose. And then once you do that for a little while, possibly get into altcoins. There’s some very interesting altcoins right now that I’m involved in. I’m invested in OMG, Ripple, and Bitcoin cash. I just love the feeling of owning my own money!”

A different kind of advice came this week from another woman who’s a true industry expert, with a PhD in Economics from Yale and current job title as head of the Federal Reserve. Janet Yellen went on record stating that bitcoin right now is “a highly speculative asset,” adding that “undoubtedly there are individuals who could lose a lot of money if bitcoin were to fall in price.” A top UK regulator said it even more forcefully, telling the BBC on the same day I attended this event: “If you want to invest in bitcoin, be prepared to lose all your money.”

As I sat in the audience pondering what I’d read in the news, I wasn’t quite ready to follow the fashion photographer off the cliff. Upon reflection I have some advice of my own. Please, please just look at the seven-year bitcoin chart. Yes, the picture above this story. Examine how the line has soared up this year – turning every dollar invested into bitcoin into twenty. Consider also what happened in the dot-com crash of 2000 to 2002, and the housing crisis of 2008 – when every dollar turned into 50 cents, a quarter, or nothing (which may have meant losing your house or life savings) in just months.  Get a visceral sense of this line soaring to the stratosphere, and how it will hit you in the gut. Have you ever ridden a roller coaster after lunch? Think about that for a moment. The blondes wouldn’t tell us the basics, but I will. Bitcoin is mined by people running computers to solve complex math problems. Solve the math and this adds a “block” to the chain and the miner wins bitcoin. Bitcoin is dirty money, as Wired just wrote. Today, the process of mining the coins uses more electricity than all of Serbia, “and by November of 2020, it’d use more electricity than the entire world does today.” But even if you don’t care about the dark paradox here – killing the planet for a cryptocurrency, you the investor might consider that if you are just getting the message now you are ideally positioned to lose your shirt. Being late to a pyramid party is risky business.

And then there’s the criminal element. North Korea is behind major hacking attacks designed to steal the currency, as well as using it as ransom payment. In May of this year, in the notorious WannaCry ransomware attack in which people around the world were attacked by a malware program that locked their computers and demanded money to unlock, the attackers received thousands of dollars in the form of bitcoin. Because bitcoin is relatively untrackable, it’s favored among criminals to launder drug dealing and prostitution spoils.

Twenty percent of the world’s bitcoin trading is happening in South Korea, where it seems everyone, including shopkeepers and laborers, wants in on the action. This mania has spread to a little place called China, where millions, the vast majority with no experience in traditional investing – the same investors accustomed to crazy, state-goosed returns in Chinese real estate funds – are pouring their savings into cryptocurrencies. The Wall Street Journal recently noted that the rampant Chinese market was a huge factor in bitcoin’s surging price. In the UK, “How to buy bitcoin” was the second most asked ‘How to’ question of the year. The promotional crypto event I attended last week tells me New Yorkers are piling in on the craze just as exuberantly.

The photographer talked about the logistics of opening up an account on the most popular bitcoin trading exchange, Coinbase. There are many others, of course, and at one point during the talk an audience member announced she’d just opened an account on Bittrex (at which point she was scolded and told to use the more mainstream Coinbase). Since these exchanges are all unregulated, holding an account there assumes a lot of risk. In 2014, the dominant trading platform Mt. Gox collapsed, and more than 24,000 customers around the world lost access to hundreds of millions of dollars in cryptocurrency – and cash. To date, as Reuters has reported, “not a single customer has recouped a single cent, crypto or otherwise.” Mt. Gox isn’t the only exchange to collapse, it’s just one of the few that actually ended up in bankruptcy court; others just vanished.

Now let’s talk about the people factor. US stocks are no sure bet, but the best of these stocks are held by professional investors, funds, companies and individuals. A reasonable number of these investors are rational, educated, and experienced, and aim to hold these securities for months or years. Individual stock prices are tied to real products and services on the market – with commensurate revenues, projected sales, customers, growth, and other factors determining their valuation. Bitcoin, on the other hand, has no physical form, and no one behind it besides a pseudonymous founder, or group of founders, named Satoshi Nakamoto. Transactions are made with no middle men – meaning, no bankers or banks. In addition, international payments are easy and cheap because bitcoins are not tied to any country or subject to regulation. There’s mystery and intrigue behind who’s truly pulling the strings.

There’s neither a “there” nor a “their” there. But the photographer loves bitcoin’s crash pattern. “I heard last week that, like, with the big three cryptos, you can always expect them to crash, like they have been, and then people tend to, like, freak out and sell,” she said, adding “I heard that in the past year, bitcoin has dropped in value by a third, five different times, only to, like, a month later, triple in value. Like, five times. Like, that’s a pattern. But it’s not a pattern that’s seen in stocks. Like, people are talking now, like, we can’t really compare it to the stock market. But, like, what I do? I just hold. I don’t even, like, touch it. I don’t even look at it.” In reality, over the past five years, bitcoin has crashed at least five times, including an overnight drop of 70 percent, and a little fact the photographer neglected to mention. Timing is everything with crazes. Bitcoin hit a high in 2013 and then plummeted and didn’t reach that peak until early this year – a four-year trough.

Having just been to Slovenia, where I spent a few days last month with true crypto experts, I recalled their educated predictions. Those guys told us they expect bitcoin to shed 95 percent of its value. To put that in perspective that would mean that a dollar invested in bitcoin would become a nickel. That a thousand dollars would become fifty bucks, that this fashion photographer’s $10,000 booty would drop to a measly $500.

The photographer doesn’t know these Slovenians. She didn’t study computer science or economics. She may not be aware that hackers just made off with close to $62 million in a Slovenian bitcoin heist. She only sees bitcoin rising, rising, up and up into the stratosphere.

“How high can it go?” asked one attendee.

“I can only repeat what other people have said. I am not a financial person. People have said, like, a million dollars for one bitcoin,” cheered the photographer, who declared she’s ready to play the long game. She’s going to hold her bitcoin “for, like, 20 years.”

Or until that roller coaster crashes down.