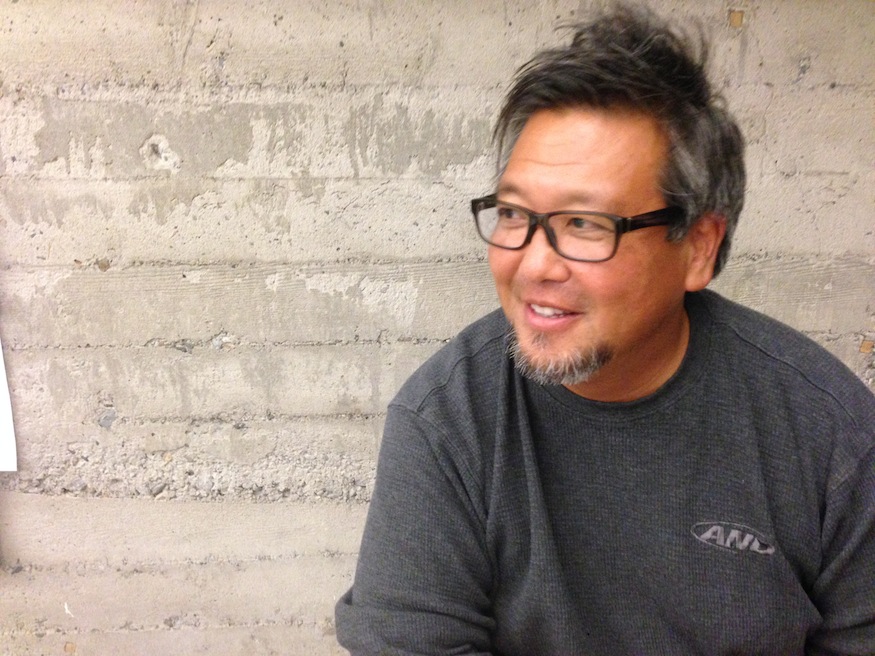 Think about Apple, and Steve Jobs or Steve Wozniak comes to mind because, nearly a quarter century ago, a 33-year-old art director named Craig Tanimoto took the creative leap that changed history.

Last week, within the cinder-block walls of a San Francisco basement, I got to hang out for a couple of days with Craig and an eclectic gang of “creatives”, as we dreamed up fun concepts for a food company. I saw how Craig thinks and fleshes out ideas, and I got him to tell me his story.

Craig was an intern at Chiat\Day the year after the advertising agency dreamed up the iconic Apple ad inspired by Orwell’s 1984. His dad was a physicist working at DARPA (the Defense Advanced Research Projects Agency), and wanted his son to be a scientist. Craig’s mom wanted him to be a dentist. Craig wanted to be an ad man.

Over the next seven years, Tanimoto dedicated himself to “building a book” and getting a job at Chiat\Day, ultimately joining the fold in 1991 as a senior creative. His seminal moment came in 1997. “Apple was in trouble, big time. They had only 90 days of money left,” said Craig. “Steve was back at the helm, but the big question was, were they going to survive?”

No breakthrough products were on the horizon, and Apple had planned on a standard product ad. “The assignment wasn’t to come up with a big idea,” said Craig. “But we took it as ‘Holy smokes, this is Apple possibly coming back to Chiat. Let’s give them a big idea!’”

Craig opened his sketchbook and started drawing variations on Keith Haring’s radiant baby. He doodled some Apple logos, shooting off radiant power lines. Craig drew further inspiration from Rene Magritte’s seminal surrealist work, “Ceci n’est pas une pipe.” Out popped Craig’s first big concept, a huge billboard with the boxy Macintosh, and the provocation, “This is not a box.” Craig loved the double entendre and circled the idea. From there he played with Dr. Seuss imagery, doodling goofy, long-necked yellow Star-bellied Sneetches and pondering how some are unique and some are social outcasts. Putting words in their mouths, he scribbled in a cartoon dialog box: “Think Different.”

Craig’s heart started pounding. He circled the words, and scanned his sketches, taking in the Keith Haring drawing. Now, he put the Apple logo with the radiant lines over Thomas Edison’s head. Then, he paired a sketch of Edison with just the words, “Think Different.” He felt another rush of excitement, and sketched Einstein with the thought bubble “Think Different.” Then Gandhi. “And at that point, I thought: this is a big idea!” Craig shut his book and wouldn’t let anyone see. “Ideas are so fragile,” he said. “If they’re not ready, and if you’re not ready to defend an idea, it can be killed instantly.”

At the big presentation before TBWA\Chiat\Day’s creative director Lee Clow, all of the firm’s creative teams were pitching. The room’s walls were plastered with ads, and Craig was thinking to himself that every ad seemed more appropriate than his. Lee walked through each one, and then stopped at Craig’s and asked:

“Should it be, ‘Think Differently?’”
“No,” said Craig.
Clow paused. “You’re right,” he said, and then announced, “This is the campaign. Everyone’s working on this one.”

The rest, as they say, is history. The bold campaign, running on TV and in print, with images of transformational giants like Mahatma Gandhi, Martin Luther King, Jr., and Pablo Picasso, rejuvenated Apple and ushered in a new age, turning personal computing into a catalyzing metaphor for rebellion, individuality, and change.

The TV script, intoned by Richard Dreyfuss, began: “Here’s to the crazy ones. The misfits. The rebels. The troublemakers. The round pegs in the square holes. The ones who see things differently. They’re not fond of rules. And they have no respect for the status quo…”

Craig Tanimoto still doesn’t really know exactly how he happened to link the rough concepts that grew into the Think Different campaign that helped save Apple. “It’s about being open to everything,” he told me. “Good ideas just sneak up on you.”