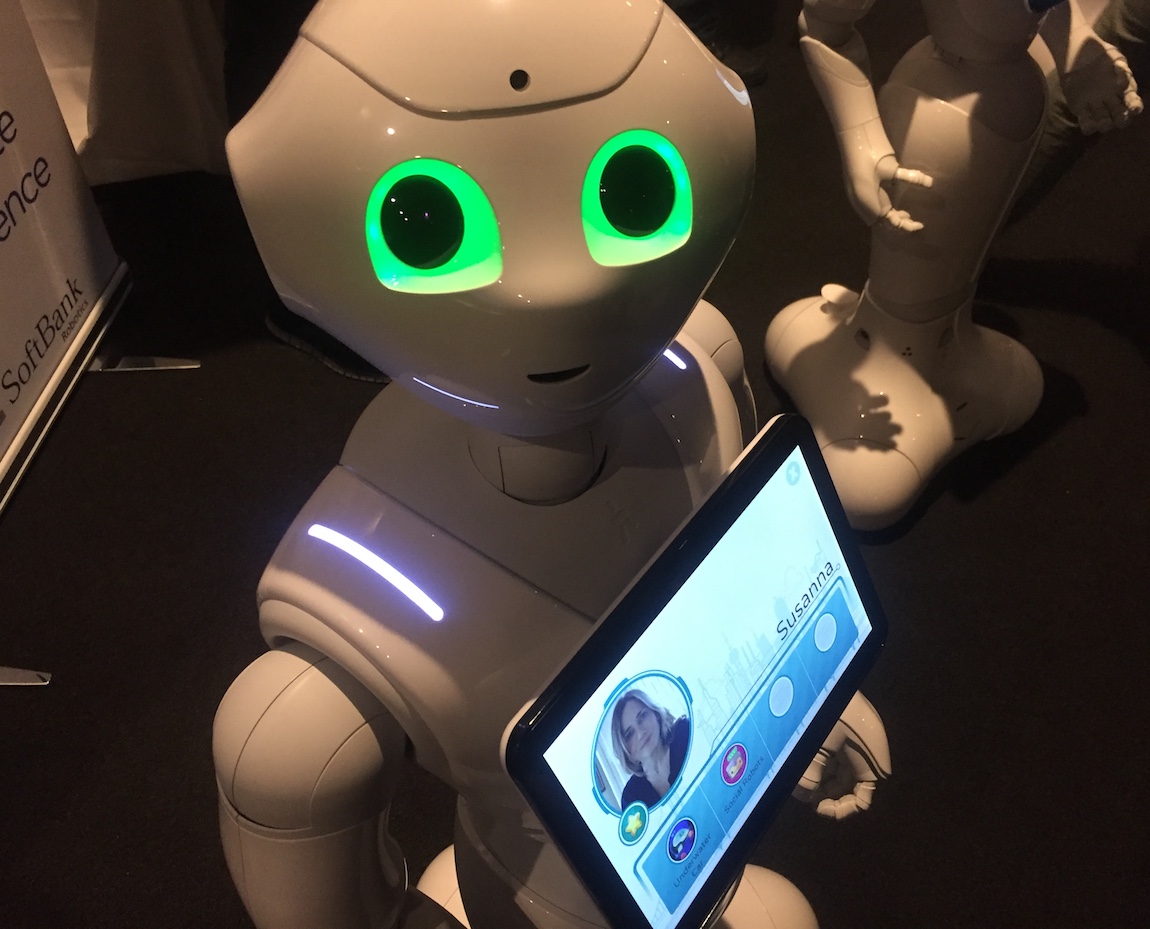 Silicon Valley can be fickle. Bitcoin was red hot last December until it tanked. Before that VR was all the rage, and now AR is thought to be the next big fad. But last week in San Francisco at BootstrapLabs’ Applied Artificial Intelligence Conference, Paul Daugherty, Chief Technology and Innovation Officer at Accenture, kicked off the day with a different proclamation. “AI is the alpha trend,” he said, adding that it opens up a “third dimension” of possibility that will enable us to solve thorny problems. “It’s poised to be the biggest thing that impacts our lifetime.”

Daugherty and other speakers at the engaging 800-strong third annual conference held at the downtown Bespoke event center talked of AI as the mega trajectory that shapes and changes all of the other tech trends such as VR, AR, blockchain and distributed ledgers, cloud computing, mobility and IoT. Applied AI was the focus, and the conference brought together elite problem-solvers from verticals in some of the most important economic sectors investing and yielding big advances in AI: energy, industry and manufacturing, healthcare, banking, security, government, media, and more (and friendly Pepper the Robot from Softbank was greeting attendees at the door, conveying the implications for the brick-and-mortar retail). There were thought leaders for sure, but the bulk of attendees and panelists were investors and practitioners, people in the trenches building products and applying AI. BootstrapLabs, a local venture firm with deep international ties, several years ago went all-in for AI. Co-Founder Ben Levy was the emcee of the day’s proceedings, covering “how AI technology is impacting people, organizations, and society in a slew of different ways across sectors.” World-changing applications of AI are coming fast, promised Daugherty, such as building and mining databases of computer vision to power self-driving cars. One of the most promising applications may be urban farming. Daugherty cited a Google Data Center food production system in New Jersey that can “grow 20 crop cycles a year versus three or four that you typically get using AI, monitoring 20 thousand data points on each seedling … dramatically improving energy usage, better quality of produce, in the inner city.”  The technology has the potential of circumventing “the whole transportation and supply chain issue” in delivering food to cities.

The Future of Work Looks Smarter

Are the robots coming to take our jobs? Yes, but mainly the jobs that are repetitive and uncreative. “We don’t have a jobs issue,” Daugherty said. “We have a skills issue.” He predicts we’ll have new job categories, such as “personality trainer” for virtual agents and chatbots. And “explainers and sustainers,” or, people who can help Mark Zuckerberg avoid future visits to Capitol Hill to school technically illiterate policymakers on the basics of social media.

Daugherty’s view was echoed by the panel on Enterprise AI Applications and the Future of Work. Sabrina Atienza, Founder and CEO of Qurious.io, explained how her voice-to-text AI technology helps people save time so they can do their jobs better. “There are 36 million business and phone conversations every single day in America. What’s crazy is that we all live and breathe in email, where everything is accessible and usable, but when it comes to voice communication – for example, a conversation you had just this morning – you can barely remember it. You can’t access it, so you can’t use it afterwards.” Her company is using AI and voice recognition to solve that problem at scale for businesses.

AI: The Brain of the Future Grid

“AI is the glue in our decentralized energy system of the future,” said Thomas Birr, SVP of Innovation and Business Transformation at Innogy, an energy innovation hub collaborating with startups in Silicon Valley and worldwide. Birr headed a panel on How AI is shaping the future of energy. Renewable energy sources have quadrupled over the last ten years. Homes are not just becoming more efficient. Many actually are producing energy, and some are even self-sustaining. Birr predicts that “AI will become the brain of the future grid,” which is growing too complex for humans to optimize. Neural networks will help the grid get smarter and prevent outages.

Technical hurdles persist. In a panel on the Death of Moore’s Law, Sateesh Kumar of Pathtronic talked about how the antiquated 1948-era architecture of chip computing environments can be a “blocking factor”. Quantum computing and new chip design are changing this old paradigm. The qubit, the fundamental computing component of quantum computing, now doubles in processing power every 7 years, panel moderator Tom Campbell pointed out. Chip sets are advancing, with new realms such as GPUs, ASICs, and FPGAs growing ever more dynamic. AI can help improve these processes.

Password and access systems need an intelligence boost too, experts on the security panel emphasized. Over 81% of all data breaches are perpetrated using a stolen password, according to Will Summerlin, Founder of Pinn Technologies. He described his alternative, AI-driven identity verification, which detects biometric patterns from a device’s accelerometer, gyroscope and keyboard and combines these with facial and palm recognition and a simple PIN, making authentication more secure than a 6,000-character password.

The Panel on AI in the media was fascinating in part because primitive “stories” are already being constructed through AI, helping media creators become more fluid and multi-dimensional.  Gilad Lotan from Buzzfeed detailed how machine learning and neural networks can quickly identify themes in a cluster of articles, highlighting trends. Additionally, “loop-style” AI systems can curate historical data to inform placement across different media outlets, “whether it’s hundreds of Facebook pages, or placements on sites, on apps, or distributive platforms.” Fellow panelist Robbie Allen of Automated Insights described how his company is already deploying AI algorithms to spit out thousands of quantitative stories such as sports recaps or earnings reports. Yet writers still have an edge. Allen said that creative, qualitative reporting through AI likely remains years, if not decades away.

Corporations can’t do it all in isolation. Jane Macfarlane, CEO of Seurat Labs and Director of Smart Cities at UC Berkeley, spoke of building “public-private partnerships where we share data across from private industry into a neutral place that we can co-mingle data, share data, and not destroy business models, and get it to government and public, so that we can make good choices about our cities.” Policymakers need help understanding the advances that happen on the edge of technology, she said. Norma Krayem, Senior Policy Advisor and Co-Chair, Cybersecurity and Privacy at Holland & Knight LLP, agreed. She added that because government regulators have a very different perspective from the private sector building technologies, there’s a need for standards to be developed together with third parties so everyone benefits. “If you are an innovator, the creator of the technology, then there is an expectation that you will be a good steward. Whether it’s consumer data, or safety, or security,” Krayen said. “And if you’re a regulator, you need to make sure that you are not stifling innovation, but you’re coming together with the innovator.”

The Future of Humanity Richard Socher, Senior Scientist at Salesforce, summarized AI’s pros and cons in his closing keynote. “Despite making a lot of progress, we’re still pretty far away,” he said, in terms of fully autonomous robotics. His presentation featured a video mashup of hilarious robot fails that had the audience laughing. Expensive hardware clumsily tipping over or falling backwards while trying to execute seemingly elementary tasks such as walking, demonstrating how far robots have to go. Then, a wow-factor clip from Boston Dynamics in which a terminator-style robot executes a series of complex box jumps followed by an amazing back flip. But Socher revealed there was a man behind the curtain — a technician with a remote control. “They have figured out a lot of the lower level dynamics to actually make it stabilize, and stand, and walk, and jump, and things like that. But, it doesn’t make autonomous decisions.”

Still, Socher detailed the tremendous advances made in image recognition and automatic inventory management, natural language processing and speech recognition. And he encouraged the audience to reflect on how fast another technology has changed our lives. Even the scientists who sent the first TCP/IP packages over the ARPANET, he said, couldn’t have forecast that today we’d have social media and Twitter.

Wrapping up the day on an upbeat note, he predicted: “The internet will have less of an impact than AI on the future of humanity.”