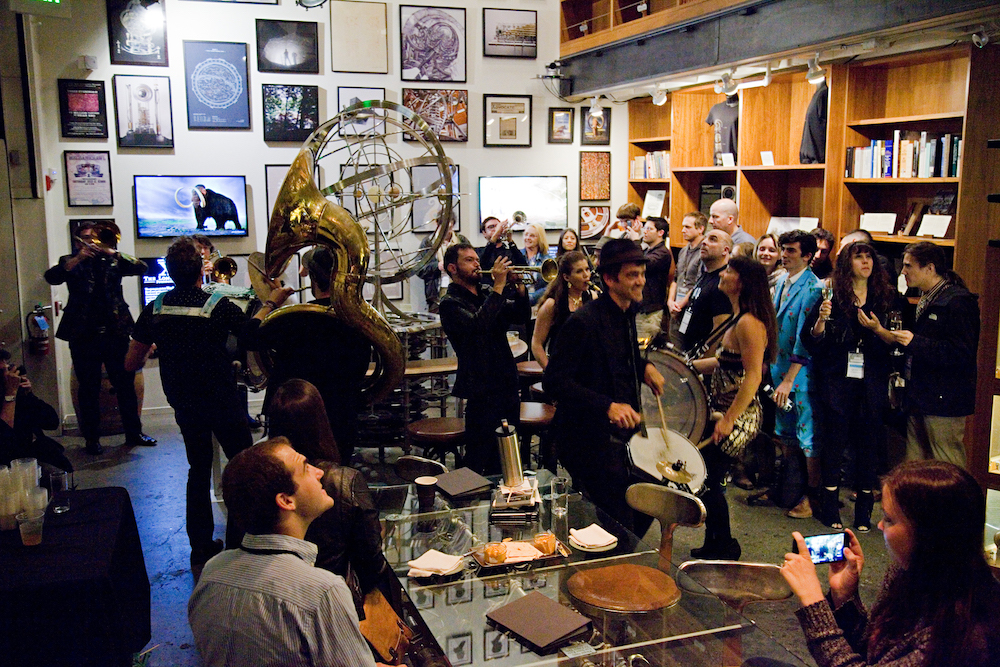 While 170,000 techies descended upon San Francisco last week for Dreamforce, a few hundred on the other side of the city dove into a one-day rapid-fire tech summit focused on a longer view of the future – five-minute talks on everything from how big-brained dolphins talk through clicks, the environmental consequences of advances in anti-aging, designing our own “alternate futures”, and why saving the planet may mean eating more bugs.

San Francisco today is where ideas, entrepreneurism, technology and money meet, and that was seldom more on display than last week, with people from 83 countries flying in for Salesforce’s Super Bowl-style corporate CRM conflagration, swamping the region with a quarter billion in business, ensnarling the city in traffic, and swallowing up nearly every hotel room and Airbnb listing within a hundred miles. But far from that Moscone Center tech-meets-corporate hubbub, at the Fort Mason Center for Arts and Culture another kind of gathering was in force: the Long Now Member Summit, San Francisco’s tech hipster counterpoint.

The Long Now’s stated objective is to “foster long-term thinking,” sponsoring astoundingly bold projects, like the construction of a 200-foot-high 10,000-year clock, the revival of extinct species, or the preservation of all global languages. With all the cash and naked ambition dominating the San Francisco agenda today, it’s easy to forget the city’s primary role in bringing us beatnik culture, the Haight Ashbury “Summer of Love”, the ensuing revolution in rock n’ roll, and more recently, California’s openness to race, sexual identity, environmental causes, and free speech. Innovation has always defined San Francisco, and is a prime factor in its current role as the world’s hotbed for startups and entrepreneurism. The Long Now’s core founders and members trace their origins to an era when technology was more about rebellion than money, more about fighting the establishment than feeding it. The roster includes legendary innovators like Stewart Brand, who created and edited The Whole Earth Catalog (and co-founded the Hackers Conference and the early digital community The WELL), along with Kevin Kelly, the founding editor of Wired, and pioneers in music and technology like the Electronic Frontier Foundation founder and Grateful Dead lyricist John Perry Barlow, music innovator Brian Eno, and futurist Paul Saffo.

Tech for many Long Nowers is more about freedom and less about business, and there’s something retro-hip about a conference free of socially deficient 25-year-olds yapping about how to monetize their new app, drive viral marketing, or accelerate their startup’s exit strategy. True to counterculture form, the event rejected the typical “top-down” conference status quo, and took shape in a participatory, innovative, inclusive format. Topics and presentations were curated from member submissions, and delivered in small bursts in a distinctive, accelerated “Ignite Talk” structure: 5 minutes total, with 20 slides shown for 15 seconds each, eight topics in a row. Themes covered a wide and eclectic range: what can we learn from cetacean communication? Is the secret to reversing the aging process found in sustainable biological forms such as yeast, worms, and flies? Can we save the planet by eating bugs? How can we innovate San Francisco’s homelessness problem and learn valuable insights into human connection in the process? To mix things up, the conference also featured a “Long Short” film festival, a curated series of short, perspective-altering films (our favorite: “Life is Short”). In step with that free-wheeling open spirit, members could slide over to a parallel un-conference, a ballroom set aside for spontaneous brainstorming. Member-led talks included a session by a local artist and climate philosopher on “Who Will Cry for the Ice? Engaging Long-Term Emotions for our Slowly Melting Cryosphere”, while an immersive theater entrepreneur led a discussion on “Breaking the Fourth Wall: Creating Experiences to Spark Progressive Conversations”. Other topics covered an eclectic range: “Technology for Gender Equality”, “Buckminster Fuller’s Warnings for Spaceship Earth”, “Navigating 21st Century Surprises via Real-time Internet for Species-Level Learning”, “Ethical Computing and Computable Ethics”.

Conferences don’t only thrive or die on the quality of their content, but on the brains and vibrancy of the attendees, and the authenticity of the space. Perched on piers over the blustery bay teeming with sailboats and kiteboards, looking out onto the Golden Gate, the Fort Mason Center is a unique spot where squalling seagulls, lolling seals, and the pull of the Pacific invite you to ponder the bigger picture.

The summit was just an afternoon and evening, and there was only one true keynote, from David Eagleman, the neuroscientist and bestselling author of Incognito, who talked about our perception of time, and delivered the uplifting message that we effectively live longer the more novel experiences we have – and in truth it was more of an experience than a conference, many attendees spending a goodly time at the Long Now’s salon and bar, The Interval, a cool gathering spot on the pier that features artifacts from many of the organization’s projects on display. Lela Gutierrez, the cheerful woman with a novel approach to combatting the ecological and nutritional wreckage of industrial food, sat at the bar with her coder husband, gleefully handing out samples of chips made from cricket flour, spicy fried crickets, and the bar favorite, chocolate-coated mealworms. This was a place where you might chat over cocktails with an installation artist from nearby Sausalito, the former managing editor of Wired, an IoT expert from XeroxParc, or a crowd hacker for corporate gigs, in full theatrical regalia, donning an elaborate, velvet brocade smoking jacket he borrowed months ago from a PayPal founder.