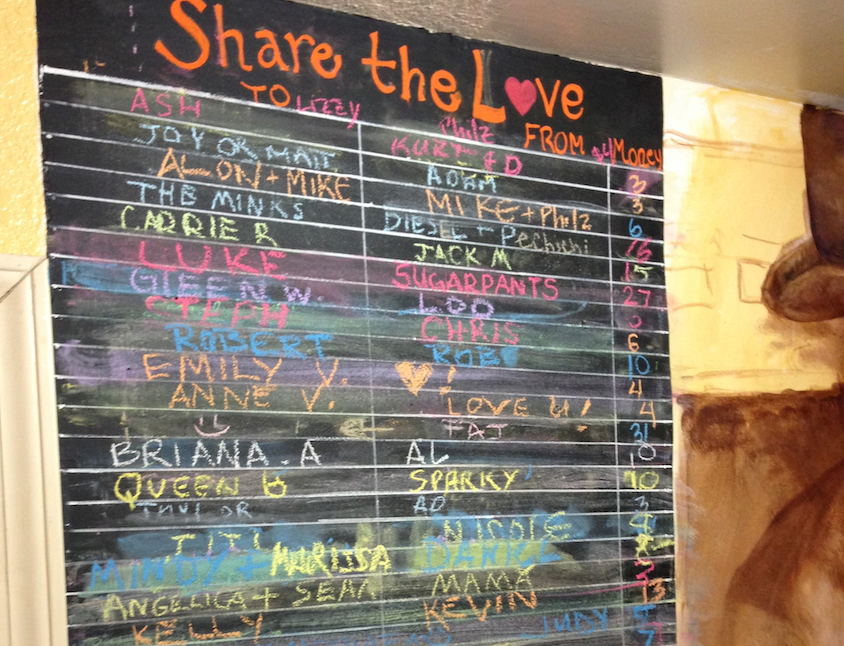 Giving a friend something small yet meaningful may be one of life’s greatest pleasures. Philz Coffee, the quirky, authentic, community-oriented, slow-drip cafe, understands this in its bones. You come to Philz to escape conformity and commodity blandness (Starbucks, etc.), and to drink small-batch coffee brewed “one cup at a time” — exactly as you wish. Hanging by the counter is a long “Share the Love” blackboard, scrawled with names in colored chalk. This is where you treat your friend or acquaintance to the hand-crafted drink of their choice by “putting money” on the board. Philz is the sort of place that features a rotating gallery display of local artists. Customers share their photos and stories on a message board and hang their own coffee mugs on a pegboard on the wall (and receive a discount for using them). It’s a place where the experience is the equation.

Mark Zuckerberg made sure there was a Philz at his company’s Menlo Park headquarters, and earlier this year, venture capitalists pumped more cash into the Philz corporate coffers, upping the total invested to $30 million. Eighteen Philz locations grace the Bay Area (one in L.A.) and the company aims to go national, with a goal of 30 locations by the end of 2015. “We feel we have something special, and we want to share this experience with more people without diluting quality,” says Jacob Jaber, the 27-year-old CEO and son of the founder. “I talk about it as ‘shareability’ instead of ‘scalability.’” Pay at the counter, take a piece of chalk and write your friend’s name, your name, and the amount of money you’re gifting them for their next cup(s) of coffee. It feels good. Do it today. Somewhere. Someway.