Apple in a Box: Unwrapping the Future 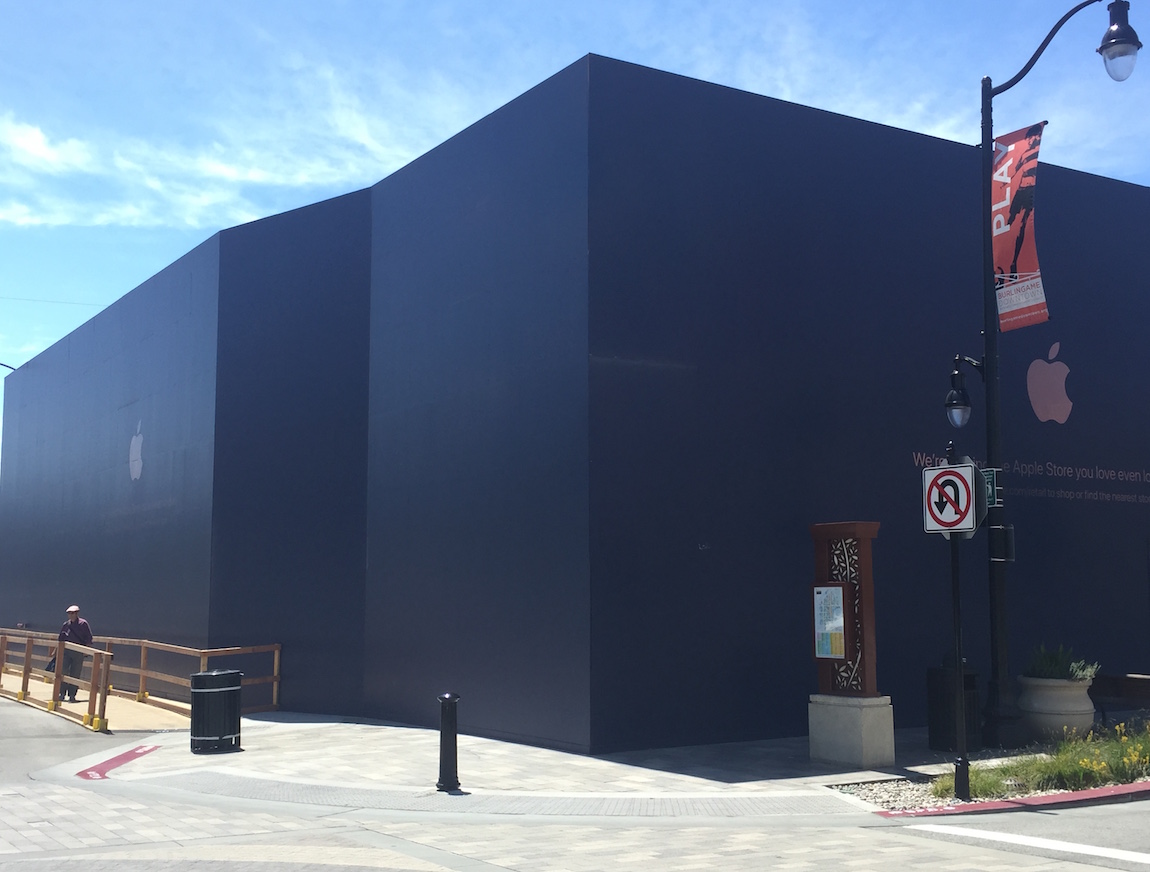 The colossal blue box commands the corner of Burlingame Avenue and Park Road, each towering facade marked with the icon of the world’s largest and perhaps most recognizable corporation. Yes, the quintessential blend of design, hardware, style and experience called Apple is getting a face lift.

The neatly wrapped big box embodies mystery. One side of the giant envelope reads, “We’re making the Apple store you love even lovelier.” The wrap serves as a giant billboard, broadcasting anticipation for the major renovation.

Why revamp the Burlingame Apple store? What’s happening in Burlingame is also being rolled out in many of Apple’s biggest retail outlets worldwide, the most significant redesign ever, coinciding with a new experiential offering called “Today at Apple”.

Burlingame itself has been transformed in recent years. The once sleepy town center of this slice of Americana has become a Rodeo Drive for the tech boom. Nearly equidistant from San Francisco and Palo Alto (about a 25-minute drive from each gravitational center) Burlingame Avenue brims with high-end boutiques and classy retailers, and crawls with Teslas, Porsches, and Maseratis. This once stolidly middle class town known for its preponderance of public trees (18,000) and the number of highways passing through it (four) now boasts a median home value that’s closing in on $2 million. A handful of billionaires live in this suburb of under 30,000 or in bordering Hillsborough, and 34 more reside in nearby Woodside, Palo Alto and Atherton. Which is another way of saying that Burlingame is nearly more Palo Alto than Palo Alto, and soon to be the latest destination for the re-invention of the Apple experience, led by retail wizard Angela Ahrendts.

Apple has many critics, both on Wall Street and among technology pundits, and there are ample examples of lost ground. AI and machine learning may gird the next phase of tech juggernaut growth, and Amazon and Google seem farther along that path. Siri remains inferior to Google Assistant and Amazon’s Alexa at handling voice requests, Apple hasn’t debuted a radically new device in years, and the company may be vulnerable to breakthroughs in VR and AR that could potentially erode its worldwide lock on smartphones. Then again, when Apple opened its first store on May 19, 2001, critics overwhelmingly predicted the effort would be a tremendous failure.

The Future of Retail Putting aside the future, Burlingame’s blue box is a symbol of what Apple does best right now, on the heels of its latest Apple Worldwide Developers Conference. This is about cultivating the far larger pool of enthusiasts, entrepreneurs, designers, workers, students, artists and musicians who make up its 600+ million users.  It’s a statement from which Samsung and even Amazon and Google can learn. Design thinking was popularized 25 minutes away at Stanford and at IDEO, but Apple has been a leader in co-opting the movement, exhibiting a deep understanding that products and services live and thrive in a larger context. The shift in new store design first made its mark in Brussels, then in Apple’s flagship location on San Francisco’s Union Square in mid-2016. What’s new? They no longer call them stores. Just Apple. Yes, they are elegant, expensive emporiums selling iPhones, MacBooks, and iPads but they are also increasingly the heart of the Apple customer experience, thoughtfully designed nexuses where users sort out technical snafus, pick up the latest training, and now – in the biggest, and arguably most significant shift – connect with artists, experts and the larger community.

Last October, Apple took this vision before the Burlingame Planning Commission and struck out. The commissioners criticized the design as too overtly rooted in “product design” with its close mimicry of an Apple laptop’s glossy shell. “A building is not a product,” declared commission chair Will Loftis. “We want buildings to do certain things for the community beyond selling things.”

Six weeks later Apple pivoted with a new proposal. Gone were the offending blank, minimalist walls facing Burlingame Avenue and Park Road. More windows and landscaping offered a fresh look. “It complements the streetscape and adds diversity to the block,” said commissioner Nirmala Bandrapalli. Acknowledging their appreciation of the company’s willingness to “think differently,” the commissioners approved the new design.

Wherever you live, you’re likely to get a freshly spruced up Apple store soon. Whether it’s a version of the original design, or a twist on the new Burlingame proposal, it will express the brand aesthetics of Apple’s sleek, hard and minimalist devices. But when you walk in, it may not be for a product but for an event, or to pick up a new skill.

“Today at Apple” is all about the events, classes, and gatherings taking place at the nearly 500 physical stores. Before the program officially began in April, Al Gore and Apple’s environmental chief held a “climate optimism” discussion at San Francisco’s Union square location. Musicians and artists have recently been featured at these free events, including hip-hop producer RZA talking about “The Art of Beat Making” at Apple in Williamsburg, Brooklyn. At my local Apple, I might join one of the Photo Walks, on “Manipulating Light and Shadow.” These special offerings are now expanding along with the traditional “Basics” classes on the iPhone, Mac, iWatch and Keynote.

The program is not without bugs. The vast potential for more creative, inclusive gatherings and events has yet to be tapped, and the clunky new online interface cries out for a more elegant, global way of previewing all the original, upcoming events and experiences by region (not just individual stores; say everything in a 50- or 100-mile radius). But some early criticism that evening gatherings can pack stores misses the vision. Retailers need customers. Most Microsoft stores struggle to attract more than a handful of consumers at any one time, and incredibly, Samsung still owns no independent stores in the US, relying instead on branded locations within the doomed-to-be-disrupted warehouse model without the mystery – the other big blue box, Best Buy.

Apple is working to design new, fresh ways to interact with people. Expect tension between Apple’s efforts to “productize” its minimal store design, and local planning commissions seeking to protect the character of their turf. Steve Jobs was prescient 16 years ago when he recognized that his company needed to create great Apple-only outlets. Now the firm is leading the way to recognize that these 500 hubs – places where people touch, see and interact with the hardware and experience that is Apple – must also connect in some meaningful, non-commercial way with the local community.

The lines are blurring between product, brand and people, especially in retail. Human contact and experience matter. In the race to create the stores of the future, the winners will excel at connecting not just design and technology, but culture.