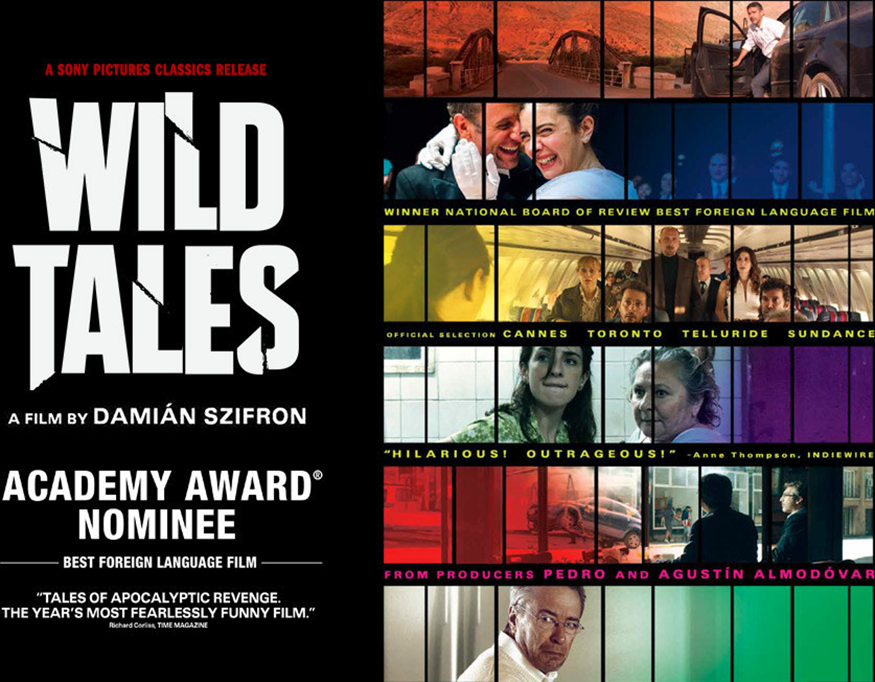 Wild Tales is just what it sounds like — a raucous, subversive collection of six consecutive film shorts, united by themes of violence and vengeance, with a fair dose of dark comedy. Just minutes into this unconventional movie, I felt an overwhelming thrill. There was something tremendously liberating about sitting in an American multiplex — and not watching a Hollywood movie. It made me stop and think. Why do we get so hung up on traditions?

Every creative field has a central form that is valued and broadly imitated: writers pen novels, artists paint canvases, and screenwriters crank out three-act screenplays. There are good reasons why these forms remain dominant. They often produce great works of art, and I’d be the last to dispute that truth. What struck me watching the Oscar-nominated Wild Tales (my favorite bit was the opener, where one by one the passengers on a plane all ominously realize they slighted the same loser, a man named “Pasternak,” who has locked himself in the cockpit) was how important it is every once in a while to break the mold, to experiment, to prototype.

“The medium is the message,” wrote Marshall McLuhan perceptively in 1964. He was speaking primarily about big media: movies, news broadcasts, print, television, advertising, which were dominating public consciousness at the time. Flash-forward to our hyper-stimulated, Internet-dominated world, and now Content (and Celebrity) rule. It’s not so much the medium anymore, but who you are and what you say. How else to explain how major newspapers failed to seed the newspapers of today — blogs — or how most traditional TV networks played such a minor role in the greatest flowering in television since the 1960’s, the long-form, dramatic series. The innovators in these new mediums bucked convention while the traditionalists desperately clung to the old.

But here’s the surprising thing — there’s still ample room for some hot new wild tales in business. Take PowerPoint, today’s broadcast medium for corporate communication. PowerPoint remains dreadfully dated and dominant, despite our nearly universal condemnation of its overwhelming limitations. I teach Creativity and Innovation at the University of San Francisco, and have taught presentations for years for companies. Here’s what I find: Many people can become pretty darn good at telling stories and pitching – once I wean them from the PowerPoint crutch. Give them some new tools, and they often come up with more creative ways of swaying an audience – with or without PowerPoint slides. Indeed. A friend at a major branding firm says the firm’s clients have been pushing back against PowerPoint fatigue. “No more PowerPoints!” they say. In response, the firm is experimenting with a hybrid approach, where some key points are printed out and put up on the wall, in a sense reinventing classic “storyboard” pitches, à la Madmen, for the digital age.

Yes, the first step is to “let go” of the traditional, and part of that risk-taking mindset is recognizing that not everyone will like your movie. It’s not easy, especially if nearly everyone else is trudging along the same path.

That’s why sometimes you just have to go wild.