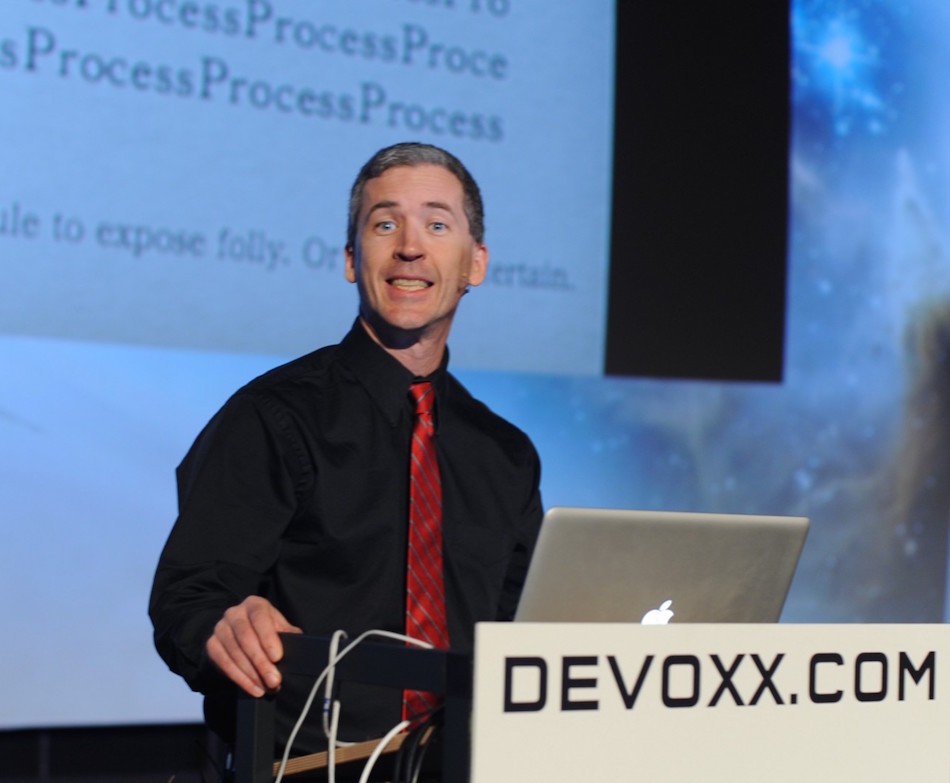 This is a story about a geek driven to make people think and laugh, a techie whose love of comedy and improvisation shows us that seemingly extracurricular pursuits can help you come into your own. Meet Chet Haase, a top UI programmer playing to a full house at the Google I/O conference this week in Mountain View, a man who both renders a mean computer graphic and holds the unofficial title of “The Funniest Person in Silicon Valley.”

Chet was good at math out of the box. In the third grade he found himself, “writing down the products,” without having to calculate. “I saw it and knew,” he says. “I wasn’t a prodigy. I just had a mental model of numbers.” He began playing the piano at seven, studying classical and jazz all the way on through college. He excelled in history and english, and at the age of 11 had his comic epiphany watching the hilarious Monty Python “Flying Sheep” sketch. The amazing “ridiculousness of it” hit him, and the young geek realized he wanted to make people laugh.

At Carleton College in Minnesota, Chet and a friend wrote the back page of the Carletonian: jokes, cartoons, essays and satire. Then, as with so many youthful pursuits, his funny bone was put to bed. “I didn’t live in LA or New York,” Chet says. “I didn’t know you could do standup or write scripts for a living.”

Fortunately, a lousy first job inspired him to return to the University of Oregon to get his masters in computer science, and discover that he had a talent and passion for computer graphics. Chet worked at various companies across Silicon Valley, from Sun Microsystems to Adobe Systems to startups, landing at Google in 2010, where today he leads and manages the team that works on user interface, animations, graphics, and hardware acceleration for the Android platform.

As with many Silicon Valley techies, the demand to give presentations increased as his skill set blossomed, and it wasn’t long before he was regularly presenting in front of several hundred people. There followed another epiphany: he could make people laugh. Entire rooms full of people. Chet enrolled at San Francisco Comedy College, wrote humor pieces for kicks on weekend mornings, and took classes from naming guru Marc Hershon and Sammy Wegent, a seasoned improv expert with a day job at Zynga. Tech slammed into improv, and changed Chet’s life. Wegent, a game developer by day at Zynga moonlighting in corporate training and comedy, teamed up with co-founders Anthony Veneziale and Scott Litton to develop their own game show: Speechless, a comic spoof on bad PowerPoint presentations. Speechless works like this: Toss an improv pro or comic on a stage in front of a few hundred tech millennials desperate for comic relief. Arbitrarily assign the comic to deliver a talk – anything from a “quarterly report” to a pitch for a “hot new app,” to “First Contact with an Alien.” Incite the crowd to shout out a speech topic – say, the new “Uber Dog App.” Then, it’s PowerPoint time, where the visuals consist of six arbitrary slides, ranging from mundane business fodder to goofy photoshopped collages and wacky images of animals.

Got it? Oh, and the presenter has never seen the slides before.

Chet attended the first public Speechless show, Wegent invited him to perform in the second, and he’s never looked back. Chet banged out code to create a virtual Speechless wheel to gamify the process of selecting the presentation topic, and became more and more involved, as the show gained a local following and was chronicled in the Wall Street Journal and other national press. Wegent’s plan was for the catchy show to spark formal corporate training gigs, and Chet (“being the engineer”) sent him his technical suggestions in “verbose emails.”

Wegent and staffers were soon busy training corporate managers to be more confident storytellers and presenters at Salesforce, the Bill & Melinda Gates Foundation, and Chet’s employer, Google. Then came Speechless Madness, a twist on the basketball tournament, pitting amateur tech performers against one another. Chet made the final round in late March of 2015, among the best amateur talent from Adobe, Zygna and Airbnb at a packed house, the Public Works theater in San Francisco. Anshul Dhawan of Zynga earned laughs with his sly presentation on the startup “Cuddle Puddle,” but Chet, donning his signature black shirt, had the audience in the palm of his hand from his first ingenious line delivered on a mock TED Talk celebrating “The Benefits of Polygamy”: “How many things are so nice that you think you have to have them twice?” he said, to roars of laughter.

Crowned champion by the audience and judges, the programmer received a dorky Lucite trophy and was declared by Wegent, somewhat auspiciously, “The Funniest Person in Silicon Valley.”

Chet credits his ongoing Speechless improv practice with major improvements in his conference presentations, such as this week’s at Google I/0. “The more I learn about comedy,” he says, “the more I get experience on stage, the more I’m able to incorporate funny bits into what I do.”

Humor has been good for Chet’s day job. He churns out technical articles on Android development renowned for their clarity, has published short humor books, and has aspirations to combine his technical depth with humor on a bigger stage, both in performing and writing.

Eleven thousand people follow him on Twitter, and 2,000 on Medium, where his tagline reads, “I write code for a living, write comedy for fun, and perform on stage for the sheer Hell of it.”

This Wednesday at 1 p.m. at Google I/O, Chet will be talking about “What’s New in Android” on the main stage of the massive Shoreline Theatre before an anticipated crowd of over 1,000 (“I feel like I should bring my keyboards and play a concert instead”), and the following night at 6 p.m., he’ll help lighten up the conference playing Speechless.

Chet Haase may have figured out the secret code to sanity and success in Silicon Valley.

Find Chet’s stories and humor pieces on Medium. His handle on Twitter is @chethaase.