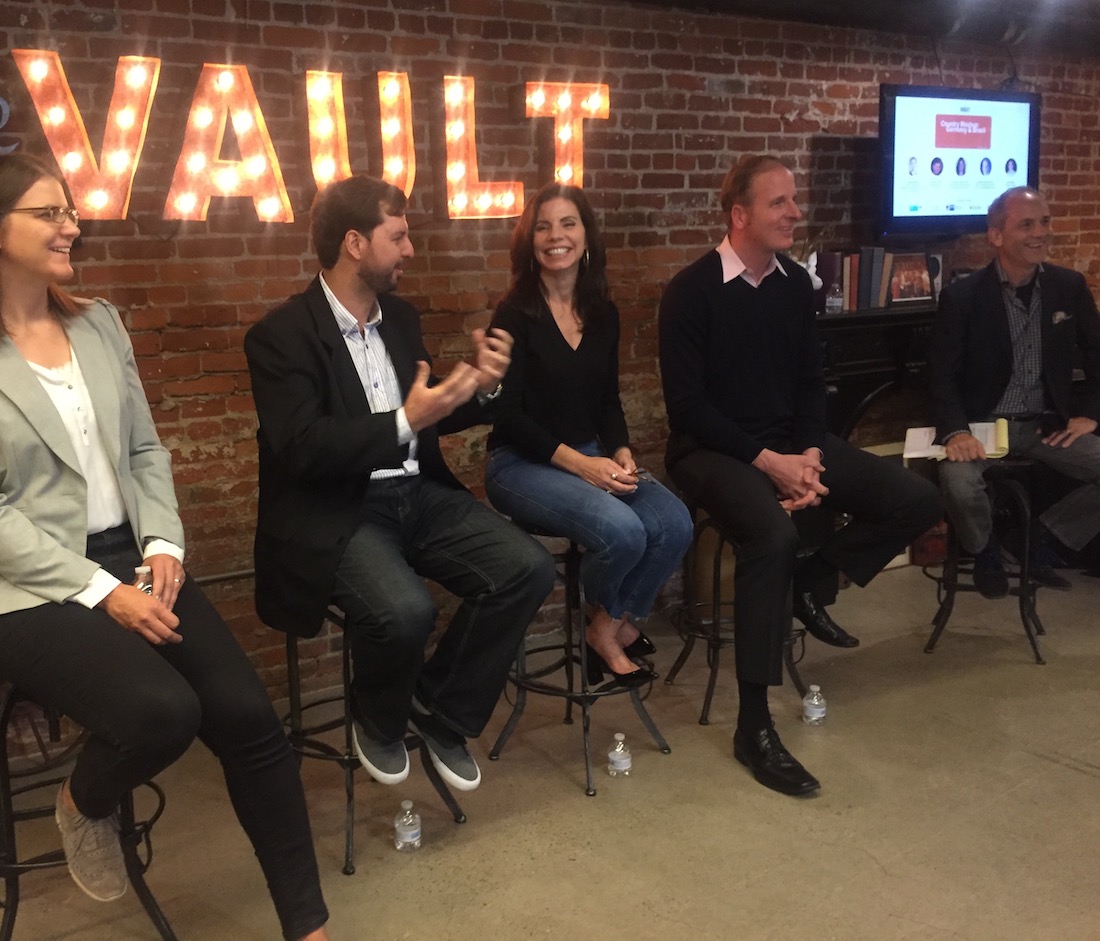 San Francisco thrives on the sparks that fly from thousands of entrepreneurs, investors, startups, all interacting in a city feverish for innovation. Last Friday night at the tech incubator The Vault, Founder Kevin Smith added a novel twist: a Country Mashup, creating the unlikely pairing of two nations separated by nearly 6,000 miles ­ – wild Brazil and orderly Germany, coming together to talk about Fintech and startup culture.

This is the second in a Vault series (the first brought together Japan and the Nordics). The provocative premise: “The source of innovation is friction. One function of mashups is the friendly friction between countries that don’t often come together in Silicon Valley,” the Vault’s Chief Revenue Officer Miika Mantyvaara told the packed room of expats from Europe, the U.K., and Brazil. “Either you create something because you make a new connection or a new idea comes out of the difference between the two cultures.”

The international entrepreneur, investor, and lawyer Kevin Smith led the panel. The evening’s million-dollar question: Can the cautious, academic, engineering-heavy Germans and the renegade, improvisational, fast-moving Brazilians learn from each other?

Antonia Zierer, Executive Director of the Bavarian US Offices for Economic Development, outlined Germany’s strengths and weaknesses. Building off a deep foundation in academic excellence and world class engineering, German startups often find university or grant support and opportunities to incubate. The downside: the pace is far slower than in the US. “The incubator scene [in Germany] is just starting. Companies bootstrap much longer. German founders don’t want to give away equity,” said Zierer. “They will bootstrap all the way to the revenue stage and then tap investment for the growth phase.”

The contrast to Brazil was a bit like comparing Mahler to samba. Felipe Trovão de Sá heads Foxbit, a bitcoin trading platform in Sao Paolo, and was happily handing out free cryptocurrency to any and all takers to entice people to take the leap. Foxbit helps users learn how to buy, trade and sell the cryptocurrency. A true tech innovator, he met his co-founders online. He’s growing fast. Last month Foxbit traded the same volume as in the entire previous year: $200 million Brazilian Reals. Already profitable, he’s now looking for partnerships to expand into other countries. Ironically, Brazil’s instability provides a market opportunity. The country’s economy has suffered massive hyperinflation. Unlike in Germany, institutions and banks are not trusted in Brazil, which has been beset by financial scandals. That chaos seemingly invites the disruption of cryptocurrency and new Fintech innovations.

While the panelists were either German or Brazilian, the attendees hailed from all over – Italy, Portugal, the UK, even San Francisco. Many worked for foreign corporations and were scouting contacts or likely investments. Others found solidarity in the kinship of similar experiences such as learning to navigate a foreign market. There were Bavarian pretzels, a catered assortment from Brazilian San Francisco restaurant Fogo de Chão, and plenty of beer and wine flowing.

One big consensus point: there’s no Silicon Valley or San Francisco in either country. Zierer weighed in on the regional characteristics driving Germany’s economic development. While Berlin is a heralded European hub for startups, especially in the B-to-C space, Zierer said that Hamburg and Cologne should not be ignored, and that Munich is a hub for mobility and Insurtech. Felipe noted that in Brazil, promising developments are emerging from Recife, a beautiful seaside town in the northeast (also known for being the source of most Brazilian Microsoft employees) and from the southern state of Santa Catarina. Gloria de Lamare Hunt, who works out of the Consulate General of Brazil in SF to assist Brazilian companies seeking a local foothold, emphasized diversity. She underlined that the metropolis of Sao Paolo, larger than many European countries, is a city of business and industry driven by an immigrant cell phone-intensive population whose needs drive development.

What was clear from the event was that San Francisco, true to its Gold Rush roots, remains a city where people come from all over the world to seek their fortune. The same weekend as the Vault’s German-Brazilian Mashup, hundreds of European founders, corporates, investors and policymakers flew in for a week of meetings and workshops for Startup Europe comes to Silicon Valley. Created and organized by Mind the Bridge and EIT Digital, the scope is impressive: including not just leading figures from France, Germany, Italy, Portugal and Spain, but contingents from tech upstart nations like Slovenia and Estonia, all culminating in European Innovation Day, an event this Wednesday, September 20, at the Computer History Museum in Mountain View. San Francisco and Silicon Valley are welcoming international entrepreneurs and innovators, and there’s a remarkable opportunity to meet and learn from these global individuals.

As for the Vault, the incubator has plans to expand to new locations in multiple foreign destinations, including Oslo, Stockholm, and Helsinki, site of this fall’s famous Slush conference. The dynamic, international flow will continue at the San Francisco Vault, with more Country Mashups in the works. Next up, France and Korea (baguettes with kimchi, anyone?). Then, Australia and the Netherlands (can kangaroos ride bicycles?).

The Country Mashup is just getting started.

For a related installment in our series on international incubators, please see our swissnex story: