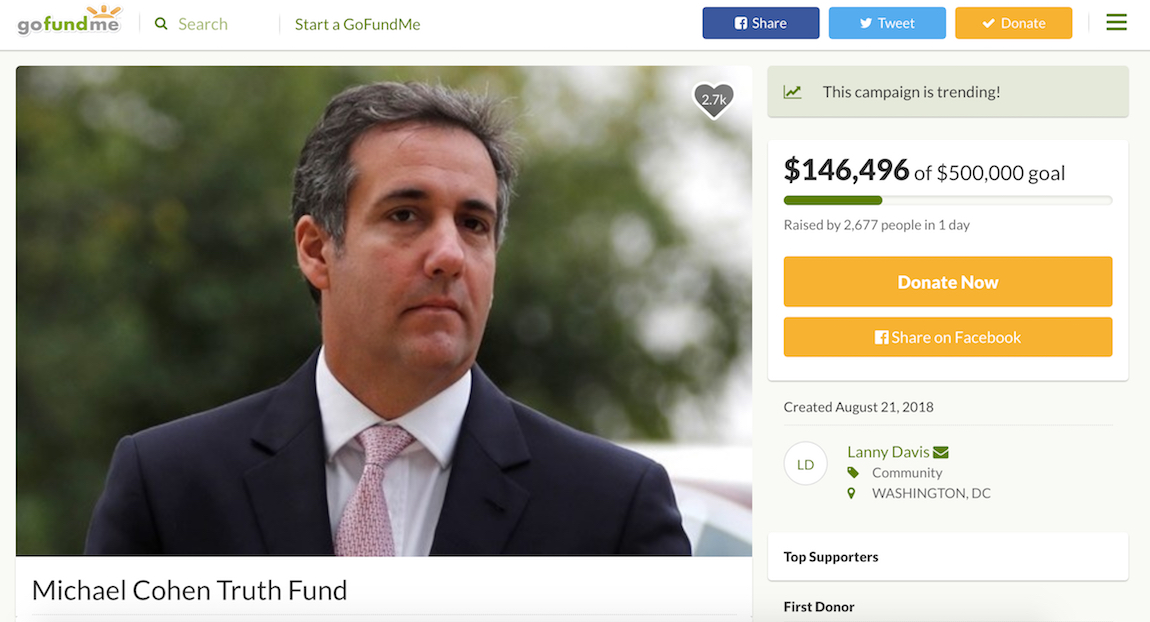 “PLEASE free our nation!” wrote one, “Stop and smell the roses,” advised another, and then there was the direct exhortation: “Go get him!” These were just a handful of the thousands who donated in $5, $10, $25 and even $50,000 increments in Michael Cohen’s GoFundMe campaign “to tell the truth about Donald Trump.” In the few short days since Cohen’s guilty plea last week the fund has raised more than $150,000 toward its goal of half a million, with more than a few donees colorfully signing their contribution “Sean Hannity” and “Fox News” and “Vladimir Putin” and even “Rudy Guiliani’s False Teeth.” In an age when we consider it perfectly normal to crowdfund apps, gizmos, independent movies, friends’ medical expenses and honeymoons, and of course startups, why not kick in a few clams to save American Democracy?

Of course, jumping on Michael Cohen’s bandwagon requires some mental gymnastics. This is the same jerk who’s been Trump’s dirty fixer for years and helped bury all the porn star and playmate stories to get Trump elected in the first place. And it’s understandable your finger might pause before clicking to donate $5 or $10 or $25 bucks to a guy who hid $4 million in income from the IRS, including $30,000 in profit from the sale of a handbag. But when he took the fifth on August 21 on eight criminal counts including tax fraud, false statements to a bank and campaign finance violations, Cohen “made the decision to take legal responsibility and to continue his commitment to tell the truth”, a step toward restoring sanity to the executive office.

These are strange times, and they require entrepreneurial, digital guerilla tactics. The reason to fund Michael Cohen is not to excuse his past, but to celebrate that he’s represented by Lanny Davis, a talented lawyer who has Trump’s number. This week Davis, President Clinton’s former lawyer and advisor, announced Cohen is neither seeking, nor would accept, a pardon from “somebody who has acted so corruptly as president.”  Davis also told MSNBC’s Rachel Maddow that Cohen is happy to tell the special counsel all he knows “about the computer crime of hacking [the DNC and Clinton’s campaign] and whether or not Mr. Trump knew ahead of time about that crime and even cheered it on.”

It’s not just that Trump cheated the American electorate in the last election by illegally covering up his hush payments. Since taking office, this reality TV star has committed an appalling ongoing onslaught of real-life crimes against immigrants, children, the environment, women, the poor, the sick and the Rule of Law. Trump is a bad actor, the most corrupt U.S. President in history.

Yes, it has to be said: giving Michael Cohen even just $5 requires holding your nose. But here’s the thing about crowdfunding. It’s ultimately about directing resources toward opportunities that scale. Pitching in toward the effort to end the tragic American accident of Donald J. Trump is one cause worth clicking on.