Get Smart: From Big Tech to Startups at CES 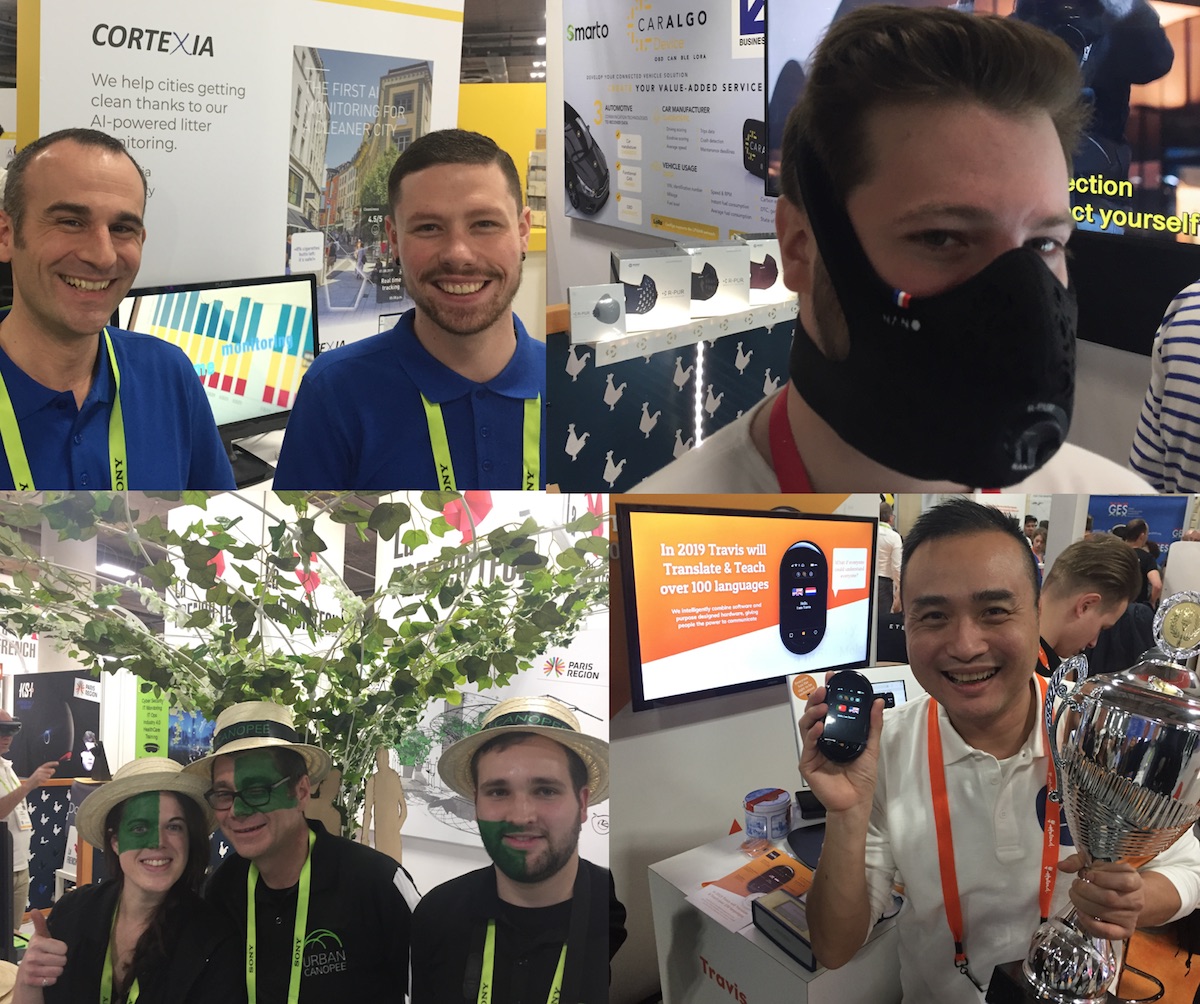 Tech is the mantra at CES in Vegas. If you love gadgets, gizmos, digitization, AI, VR, and the pursuit of electrifying experiences, this gargantuan conference is nirvana. But with 4,500 vendors and 180,000 attendees, how do you separate the good from the bad? We sought out just those companies that had a fighting chance of being interesting. Brought our own metric to help us make our selections, the WIT test, a two-minute, four-question cut-to-the-chase litmus test, to find the there there. 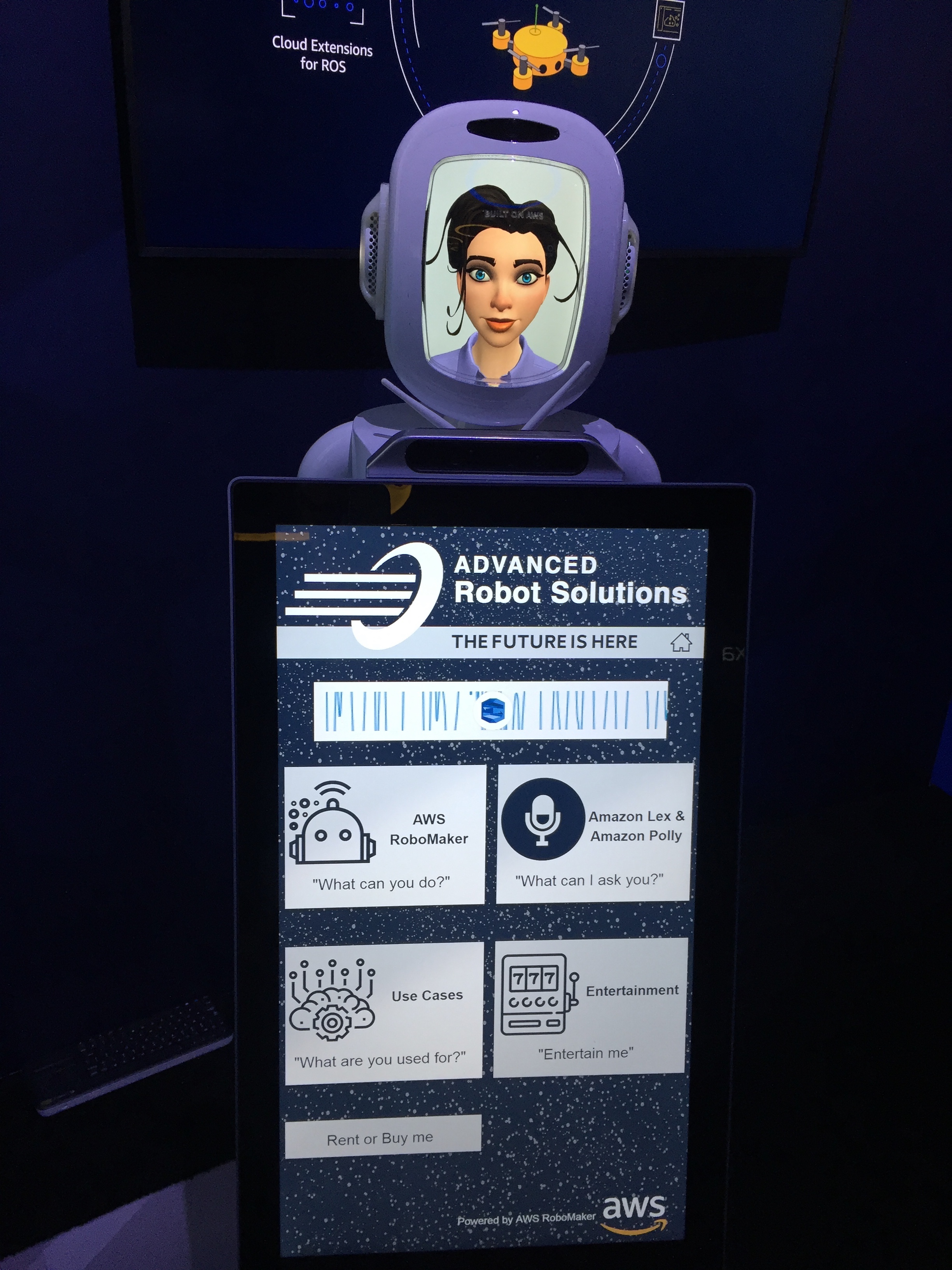 First, a little context. Big tech and the idea that more is better was ever-present at CES. Amazon’s packed showroom demonstrated its dominance. All the gizmos in your life are now fully Alexa-connected. Not just your speakers, your door locks, and your car, but your bathroom mirror, your tub and your toilet. Meanwhile sleep tech and connected home appliances came on strong. Want your sleep quality quantified and rated through your smart mattress? Need voice-activated circadian lighting? Robots or intelligent countertop ovens? Gadgets for tracking your kids? You could get lost in the family tech zone.

Dare to venture from the digital domicile, and you could plug directly into car tech. CES hosted a self-driving parade of cars, motorcycles, semis, and delivery trucks. Giant wrap-around screen dashboards to lend that homey, Holodeck feel. Motion-calibrated VR headsets that deliver vomit-free in-vehicle entertainment you never knew you needed. Hyundai showed off a Transformer-like quadruped car perfect for clambering over obstacles or walls (especially handy when Armageddon arrives).

Erstwhile show starlets like smart phones had to hustle for attention. Vendors touted the 5G wireless tease. This newer, faster network has so far been blocked in most of the US and parts of Europe, as major network provider Huawei, accused of spying by Poland this week and already in a snootful of legal trouble in North America, was persona non grata at the conference. Samsung’s sneak preview of its folding phone didn’t materialize, but gawkers didn’t have to wait for its debut at next month’s Mobile Congress in Barcelona. The Royole FlexPai foldable phone was already doing (but not landing) backflips. 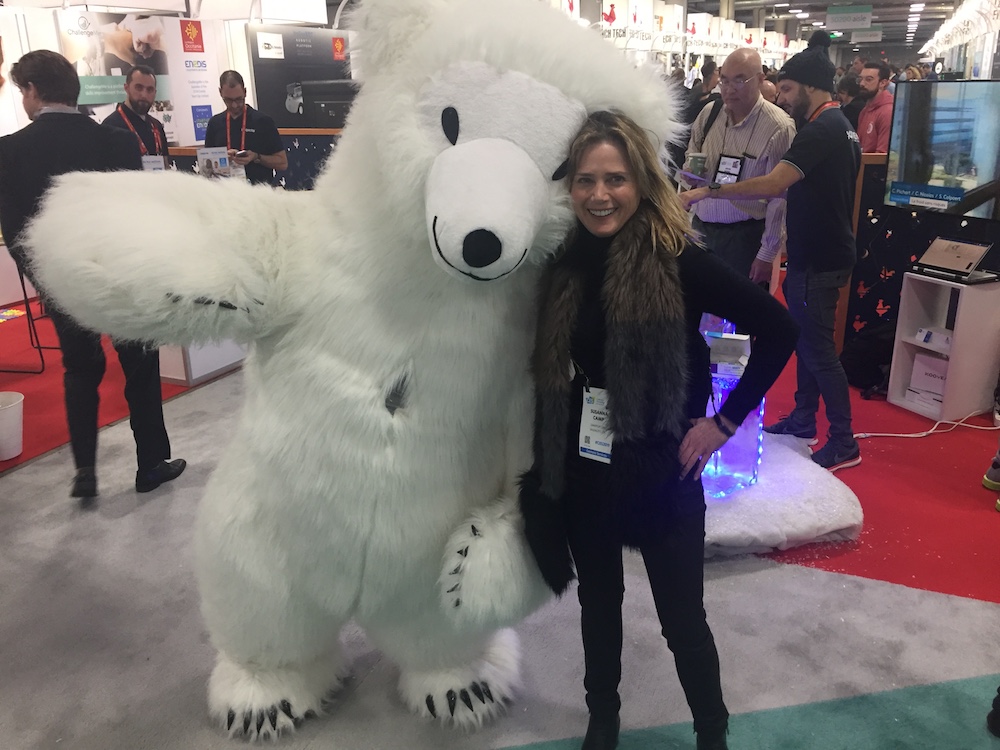 Money and hierarchy pass for design at CES. Out with creativity and collaboration. In with siloed thinking. High rollers upstairs, startups below decks,  in the sprawling, claustrophobic basement dubbed “Eureka Park.” Bizarrely, these 1,200 hopefuls were organized by country, and not by any thematic differences. An investor seeking HealthTech, cybersecurity, or any other vertical was forced to run the gauntlet of international hawkers. Facing so many candidates and so little time, we quickly narrowed the field to just two European countries, France and Holland. Sounds small, but these two countries represented a third of the startups. Some say France overdosed, with 381 startups, outnumbering the total from the US. Holland, the next largest contingent, brought 50. And yet, whether or not they were ready for prime time, we found a refreshing commonality in their approach to entrepreneurship. Europeans in general care a lot about the health and well-being of people, cities, and our planet.

Enter Matthieu Lecuyer, the co-founder and CMO of R-PUR — a mask originally designed for motorcycle and scooter riders. Air pollution is the third highest cause of death in France. And it’s a global issue. Millions of Californians couldn’t breathe this fall when both ends of the state were hit by devastating wildfires, the new climate-warming norm. Local hardware stores quickly ran out of P95 masks as the air pollution reached dangerous levels. Homes, schools, and roads were unsafe. Lecuyer’s contribution combines a new filtration technology, ergonomics and style. An app alerts users when the filter needs to be changed. Yes, it costs more ($250, plus $29 for each filter) but this is the Tesla of face masks. The R-PUR filters out particles 10 times smaller than those caught by the masks that adhere to lax American safety standards. Originally designed for the extreme pollution motorcyclists face in Paris, R-PUR is a great example of how designing for serious pain works. The company raised €180,000 in a crowdfunding campaign, and with dirty skies ahead, its future is bright.

Cities face their own pollution problems. Few are thinking creatively about how to tap tech to clean streets or help inhabitants stay cool. Cortexia is a Swiss startup sponsored by France’s LaPoste. They’ve devised a camera-enabled truck to track litter patterns in a city, right down to the cigarette butt. An AI-based method to compute a cleanliness index. The company studied and partnered with the city of Zurich, which determined after careful study that cities would be wise to tidy to a level of 3.2 out of 5. Not too clean, not too dirty. Just clean enough. Cortexia also reveals local daily litter patterns, so that sanitary workers can introduce new operational efficiencies. Clean cities, of course, are another form of clean tech. Clean cities are good for the environment and stay cleaner for less money. They attract sustainable businesses, tourists – and startups and others essential for building a healthy tech ecosystem. Cortexia is now testing in Switzerland and France. San Francisco could use a good cleaning, so we hope they get there soon!

Modern cities, like aging computers, are heating to the boiling point from climate change and overdevelopment – roads, concrete and buildings that amplify temperatures. Urban Canopee has a surprisingly simple solution, modular vegetated canopies that can be installed in public spaces. Where’s the tech? The units feature sensors and an irrigation algorithm to provide autonomous and connected watering systems that can be managed by city administrators.

And then of course there was LifeinaBox, the winner of the Prix Galien, France’s veritable Nobel Prize for med tech, now shipping product: a mini-fridge for sensitive medicines. Founder Uwe Diegel and his daughter Chloe owned their corner in the LaPoste alley in Eureka Park, and also made the conceptual leap to the big tech upstairs, with a unit on display in the showcase room among the CES Innovation Awards.

Getting Smarter: The Language of Design 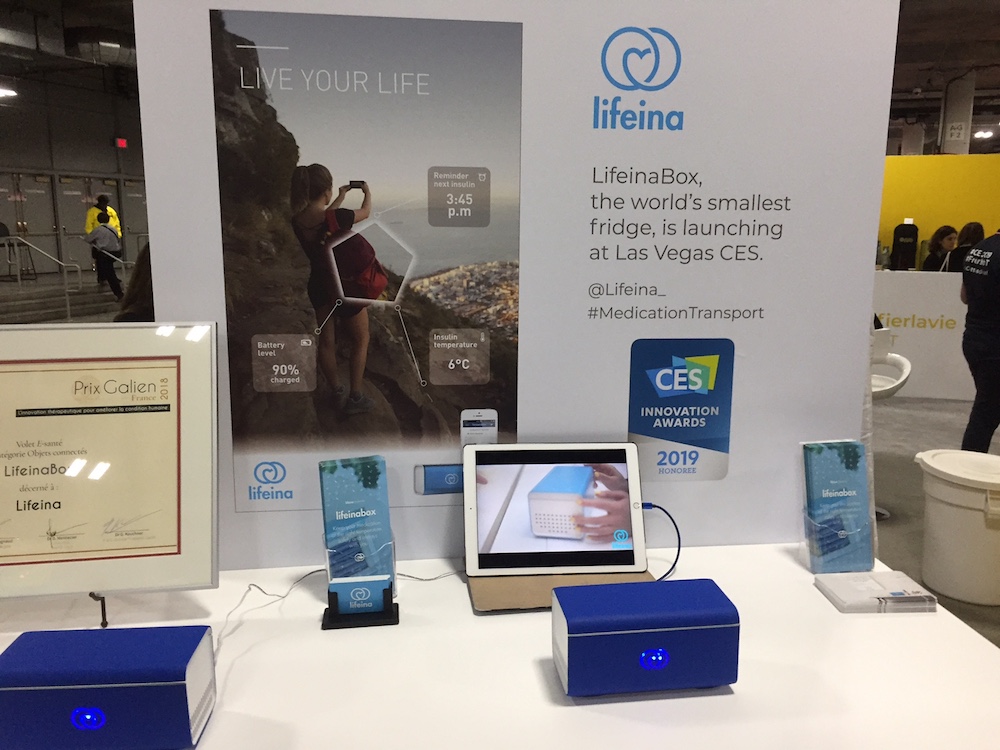 As we emerged from the French megacity of startups we entered the Holland Tech Square, where we ran into Dr. Peter van Deventer of the Dutch consulate of San Francisco. Director of the Dutch Coast to Coast Smart e-Mobility program, van Deventer told us he’d helped to vet and curate the substantial but more modest group of startups from the Netherlands, a strategy that he explained, has worked well for his small, but outward-facing, technically advanced country. We found several interesting products. Our favorite was something we could use right now.

Travis Touch is a palm-sized pocket translator. Speak a phrase in English and out comes fluent Chinese, or any of 100+ other languages. Wifi-enabled, Travis draws from 20 different language engines to source the best translation.  The biggest proof point for a startup is sales. Travis has sold over 150,000 devices in just two years. It’s easy to imagine holding it in your palm and translating both sides of the conversation on the fly. It’s simple, and does one thing very well that matters. We met co-founder Nick Yap, who clearly has a nose for his best customers, whom he ranked in order as Japanese, followed by Chinese, Spanish, Portuguese and English speakers. Yap also co-founded Zoi Meet, conveniently located at the adjoining booth, a professional subscription service that this March will start providing simultaneous translations of your PowerPoint talks to your foreign audience members. This plays beautifully into the trend of global innovation: tech elegantly serving a growing need for people of all cultures to share ideas and insights.

Our final afternoon we walked the floor with Mathieu Guerville, an Innovation Director for UL Ventures in from Chicago to scout startups. Mathieu lent the context so lacking at CES. A deep knowledge of trends and tech, and a running commentary on the startups we encountered together. The vast majority at CES, he explained, are trying something someone bigger already does better. They’ve built a clunky prototype without testing market fit or demand. Mathieu wished CES was optimized for professionals like himself. Not just categorizing in verticals (as at Web Summit), but conceptually. “Why don’t they have a product section for simplicity? Innovations that do something better with less,” he suggested. “Or a category for products that are less expensive.”

Tech-for-tech’s-sake is pervasive at CES. A hammer looking for a nail, instead of a true pain point with tech applied as a precision tool. It’s no wonder some startups can’t articulate their raison d’être. The world – CES attendees included – deserves more.