How to Get a Job in the Capital of Tech: Meet SF Poster Bro 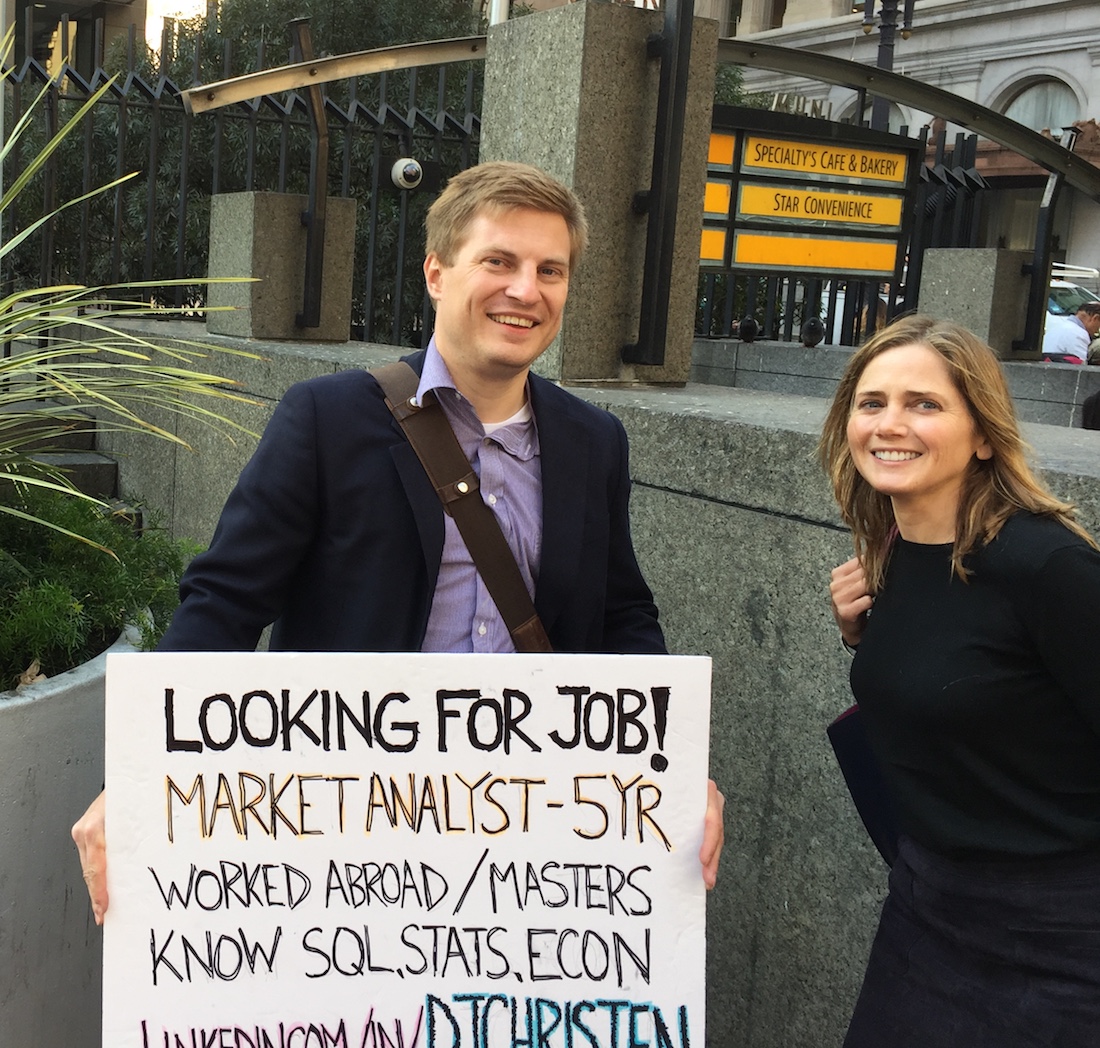 Meet Daniel. He’s not your typical down-and-out sign-holder. He’s not looking for a handout, but a job. Daniel’s got the hustle down. He took the initiative to write a hundred cover letters for LinkedIn job applications. He’s driving 40 hours a week for Lyft to make ends meet. And then he decided, why not try something radical? So, he dressed up in his interview outfit with a hand-written poster board featuring an ad hoc want ad.

It’s a dirty little secret. Applying to tech jobs via LinkedIn can be an exercise in futility, a staring match with the big black hole of unread resumes and non-existent call backs. We came face to face with this reality last week in downtown San Francisco. In the city that lives and breathes entrepreneurs, startups, and techies, waiting for a bot to reply to your job application won’t put food on the table. Just outside the Montgomery Street BART/Muni station, we spotted Daniel and his ad:

Pitching to the Bots

Innovators might call this pivoting on a pain point. When the vaunted digital system fails, fresh approaches are the only viable strategy. Warning: None of what follows is to say that you should abandon LinkedIn. Yes, it’s the premier jobs-exchange platform where companies post jobs and professionals presumably find work. It’s a great way to grow your network. And there are plenty of tools and resources to be found. The site is replete with resume specialists and career coaches who will help whip your profile into shape to optimize results – for a fee. They’ll tell you to pepper your CV with keywords, tailored to specific job postings, to target the machine-reading “applicant tracking systems” recruiters use to score your application. All the same, if the bots don’t pick your lucky number, what’s an applicant to do?

Sometimes, unless you want to be the tool, you’ve got to buck the system. Daniel’s girlfriend has a job at a top SF tech firm, and at first, she thought his street corner scheme crazy. Then it grew on her. “She actually thought it was cool,” says Daniel, who got his inspiration from a millennial in England who poster-boarded in London’s Waterloo Station to land a dream job. “She said it was a good idea and told me I should go for it. Because you have to think outside the box, especially in this economy.”

Yes, even in San Francisco, it pays to step out of the digital job application box. So how did his experiment go? On day one, Daniel met a lot of people and had an overwhelmingly positive experience. “‘Hit me up on LinkedIn or send me an email and we’ll talk,’” Daniel says numerous people encouraged him, adding: “Half of them have been recruiters.”

Location, Location: The Value of Place

Daniel chose this spot in the epicenter of SF’s financial district not merely for the foot traffic and the proximity to recruiting firms, but because this is where he believes he’ll one day work. He’s figured out a way to knock on doors in an age when they are frequently locked.

Daniel is bold. Well educated. He has a master’s degree in urban planning with a certificate in transportation systems, and an undergraduate degree in geography and economics. He’s worked as an analyst for the San Francisco Metropolitan Commission, and at Siemens in Germany for three years, in Business Development and Market Intelligence.

We caught up with Daniel online this week to see if anything’s changed. Turns out, a lot. He’s now got a foot in the door at Lyft’s headquarters, competitor Uber, and other tech firms where he could put his passion for transportation infrastructure to work. He’s connected with more than a dozen solid new advocates assisting with his job search. All through holding up a poster board in downtown SF and disrupting the traditional digital job search beat.

Daniel’s got smarts. He’s got guts. He’s willing to experiment and take risks. Isn’t that what startups and tech companies in SF need?

Want to Find Work in the Capital of Tech?  Check out:

A Millennial Hunts For Work in San Francisco: Should I Stay Or Should I Go?