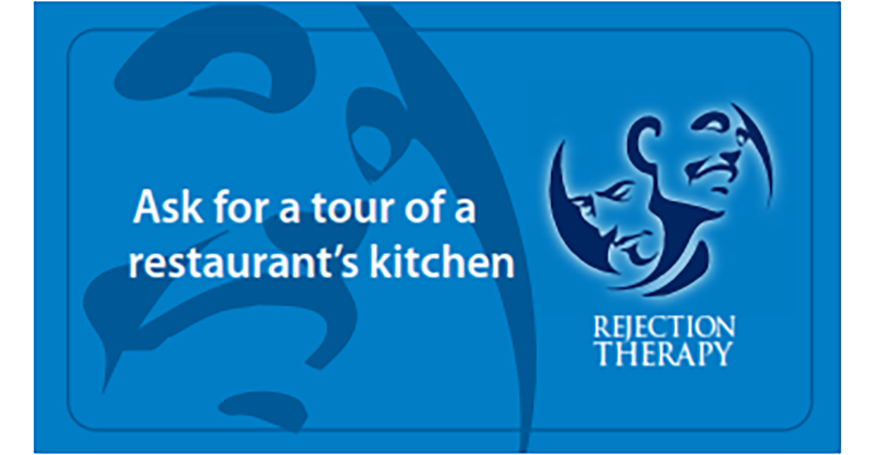 One lonely night not long ago, Jason Comely was where we all end up at some point in our lives: feeling sorry for himself. The deck seemed stacked against him. Nine months earlier, his wife had left him for a taller, richer, better-looking man. It was a Friday night, and Jason was at home. He’d stopped going out and interacting with people, especially with women. Jason broke down and started crying, and then had an epiphany: What he feared most was rejection.

Here’s how he smartly flipped his pain into an innovation. Jason came to grips with that hurt, and then connected it with an odd idea. He remembered reading how the Spetsnaz, the Soviet Special Forces, mastered commando-style training methods, such as locking a soldier in a room with a vicious dog. Jason linked that extreme approach to his predicament. He wondered if he could devise a training regime to combat his fear, a sort of Spetsnaz for geeks.

Jason started slowly. At least once a day he had to get rejected. He tried to give a flyer to a woman (her response: “No”), and asked a stranger in a grocery store parking lot for a ride across town (“I’m not going that way, buddy.”). The No’s and rejections flowed forth, but that wasn’t the point. Jason found that his training regime was making him more confident and far better at handling rejection. That’s when Jason had his second epiphany: turning his hurt into a business. Jason wrote down his rejection strategies and had them printed onto cards. He began selling “Rejection Therapy” – simple challenges laid out on a deck of cards:

“Smile at every person you walk past today.”

“Say hello to three people at the grocery store.”

“Ask for something not on the menu.”

At $10 a pack, Jason was helping people to safely prototype failure, though some of the more advanced challenges require a hearty dose of courage: “Ask a friend to do your laundry” or “Confess to someone you lied to.” Perhaps not surprisingly, “Rejection Therapy” quickly caught on and became a cult hit. Jason was featured in a number of newspapers and was interviewed on National Public Radio.

By turning rejection into a game, Jason flipped how people view failure. “Rejection was kind of a dirty word,” he told me. “Rejection has been hacked. It’s lost its sting. Rejection’s cool now.”

Though Jason describes himself as an introvert, he’s no longer afraid to talk to people or meet women. He’s sold thousands of “Rejection Therapy” cards all over the world and received countless heart-warming emails from people who told him they got a job or found the love of their life. Jason has tapped into a larger movement, an international fear-busting, rejection-stomping trend. Jia Jing, the entrepreneur, is publishing a new book, Rejection Proof: How I Beat Fear And Became Invincible Through One Hundred Days of Rejection. Jing’s rejection challenges are pretty darn cool — he asked a cop to drive his car and a pilot to fly his plane. His story illustrates how prototyping lots of little failures — one day at time — can dispel your fears and help you gain the confidence to tackle your dreams. Jing secretly videotaped many of his rejections, including an astonishing trip to Krispy Kreme Donuts, where he asked for and (incredibly) got a marvelously can-do employee to make him donuts in the shape and color of the Olympic rings. “Sometimes you make a crazy request,” Jing says on his blockbuster 5 million page view YouTube video “and you get back an awesome answer.”

“Rejection Therapy” should be standard training for all entrepreneurs. It strikes at the heart of innovation. Stand up to your fears, take away your personal safety net, and venture out onto the tightrope of new ideas and creativity.