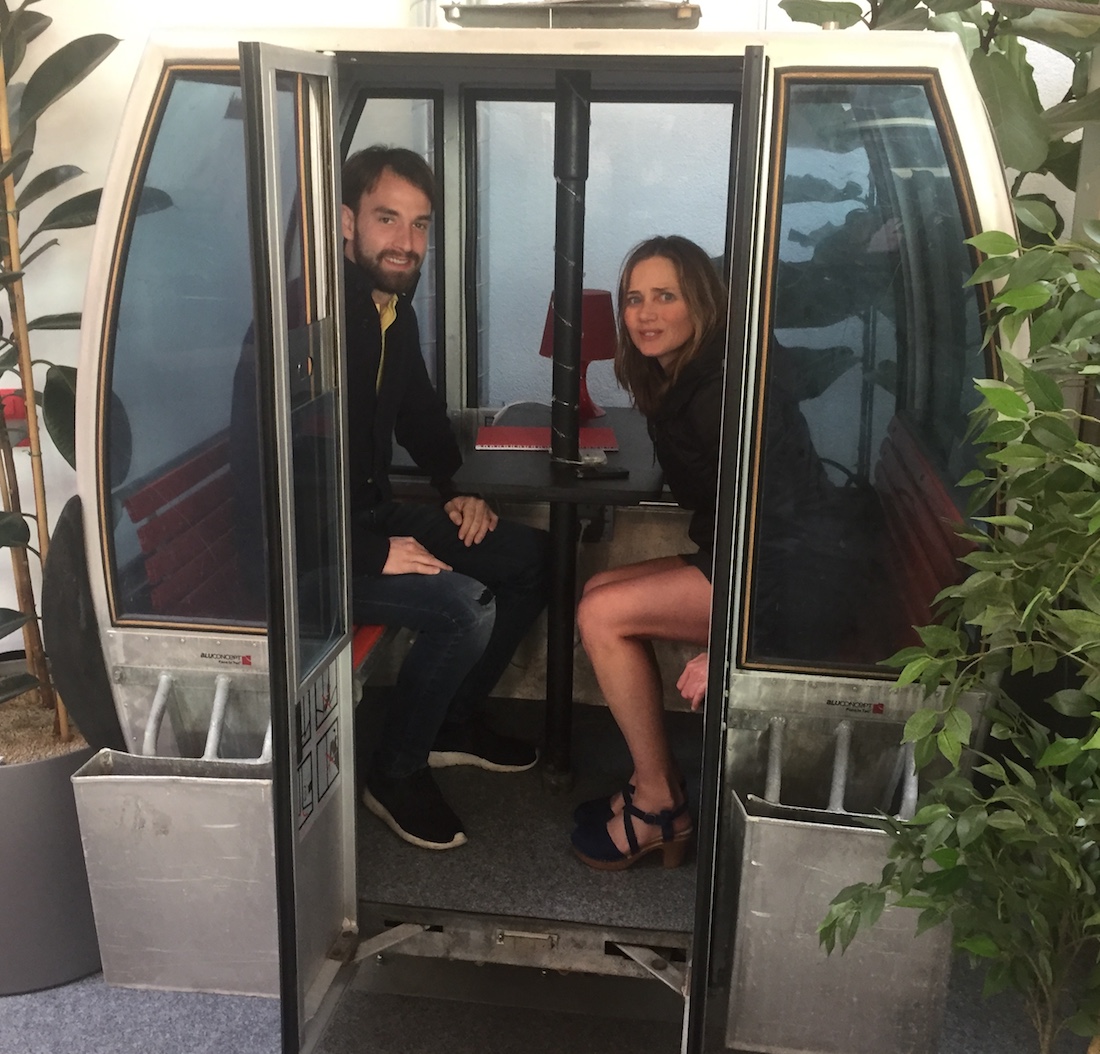 Sunday morning we took off from San Francisco, landed a few hours later in New York and dashed to a distant gate to catch our connecting flight to Geneva, where we rode the morning Monday commuter train to lovely lakeside Lausanne. Like clockwork, within one five-block radius we promptly interviewed three compelling founders in succession, including the CEO of the red-hot VR unicorn MindMaze, backed by none other than Leonardo di Caprio. Then, it was all aboard the evening 320-kilometers-per-hour TGV express to Paris. Welcome to Day One of our European grand entrepreneurial tour.

Our first Swiss stop: Gotham, a trendy high-end co-working incubator hybrid replete with elegant Swiss furniture by the luxury brand Vitra and boutique hotel lighting, that’s also home to the startup Batmaid. This Swiss-made housecleaning service is preparing to expand into new verticals in plumbing, electrical, and handyman services. Batmaid’s founder Andreas Schollin-Borg is also one of four co-founders of Gotham. “What we want to do is not only co-working. We want to do any kind of different business you can have.” Gotham is flying at bat speed into a second space in Lausanne, then Geneva, Martigny, Bern, and Zurich in 2018. Andreas caught the idea for Batmaid while studying business in New York three years ago (after earning a master’s at University of Geneva and undergrad at HEC Lausanne). He launched the business with co-founder Eric Laudet in late 2014 while juggling the redesign of his family’s hotel in the Alps. As he put it with a smile: “No sports, no holiday, no weekend, no girlfriend.” Andreas slept just a few hours a night. The dynamic duo self-funded Batmaid for eight months, then received a half-million Swiss Franc infusion from Swiss engineering and services giant Onet, and kept accelerating. Andreas found the site for Gotham, a defunct Lausanne postal sorting center, perfectly located by the train station, in late 2016. “Everyone says no. Boom. We make it happen.” Gotham opened this summer. “We have Scoot, Nespresso, and Logitech, and more than 100 members.” From Gotham, we walked down Avenue d’Ouchy to meet Key Portilla Kawamura, who started the local branch of Studio Banana, the design consultancy and co-working space in Lausanne with a threefold purpose: first, to be surrounded by entrepreneurs, freelancers and other like-minded creative people. Second, to boost serendipity and change within his firm’s projects for the range of talented people who join the community: “We believe in accidental creativity,” says Key, adding that there are intangible benefits to being part of the club. “Crowdsourcing concepts, talking about ideas, getting people from diverse backgrounds giving input.” Third, to host events and build the local ecosystem. Meanwhile, Studio Banana also creates crowdfunded design products such as the Ostrich pillow, a playful power-napping padded headwrap which was featured on Jimmy Kimmel’s show and raised almost $200K, and Batband, sleek, ear-free headphones that attracted an astounding $871K in a week. Key and his co-founder’s ventures have been written up in Wired, TechCrunch, and sold in MoMA’s stores. The firm also runs a London studio and another in Key’s native Spain, in Madrid, where a major client is the uber-hot IE, the university with the world’s top-rated online MBA program. “We are practitioners of open innovation, getting ideas from different walks of life,” says Key. “We thought, why don’t we create this in our own house? Let’s start with people, surround ourselves with people who think creatively.”

Key walked us down the avenue to the world’s first VR unicorn, MindMaze, a celebrated neurotech startup headed by Dr. Tej Tadi that is breaking ground on cognitive rehab and augmented facial recognition. The son of two doctors, Tej grew up in the East Coast and India, and studied electrical engineering at the renowned École polytechnique fédérale de Lausanne (EPFL). “Like every kid, I was interested in space and aerospace,” he told us from MindMaze’s headquarters overlooking Lake Geneva. While earning his master’s and doing advanced coursework in virtual reality and computer graphics, he dabbled in special effects for movies, studied the work of Pixar and Disney, attended the SIGGRAPH computer graphics and interactive conference, and became intrigued by “the creative side of things.” This was 2004. “I was doing virtual reality and 3D with humans and augmented reality and the rest,” he says. “What interested me was the believability in being able to trick the experience and the interactive nature of the content.” During one of Tej’s master’s projects, he learned to “synch all three elements of someone walking” (a human walking on a treadmill, a humanoid robot, and an avatar), and began to probe how the brain controls movement. “That’s how I got into the hospital, to understand locomotion better.” Tej saw the terrible pain and challenges faced by so many. “You look at stroke patients with movement deficits, schizophrenics, amputees, paraplegics. You very quickly realize it could be you in the bed tomorrow and what would you do? What would you want to be possible?” Experiencing this suffering first-hand led to MindMaze’s first products, FDA-cleared virtual environment therapies for neurorehabilitation patients deployed in hospitals worldwide. Motion capture sensors attached to a patient’s arms and hands enable real-time mapping onto a virtual avatar to optimize feedback, gather data, and provide post-session analysis.

MindMaze’s broadly accepted applications for stroke victims in hospitals give it a rare advantage over other VR startups. With that steady source of income and international exposure, in 2014, with the rise of Oculus and other developments in VR, Tej saw that “these guys are building headsets. They will want emotions, they will want to move in these environments, they will want to touch and feel things in virtual worlds.”

Building on its earlier work, MindMaze has developed algorithms that could grant avatars a more human sensibility. MindMaze MASK can predict and transmit a smile, frown or grimace to your avatar in just tens of milliseconds. That has translated to money in the bank: the company has received at least $108 million in funding, and begun snapping up smaller startups. The product holds great promise for entertainment industry applications. Remember Inception, the sci-fi hit starring Leonardo DiCaprio? The star just invested in Mindmaze and joined its board.

How does it work? “The mask is just a thin layer of foam between the head monitor display and your skin. Every time you wink or smile [or frown], it’s a displacement in your facial muscles, and there’s a beginning and an end,” says Tej. “It depends on the gradation of your smile … it gets complex because when the skin moves, the muscles underneath move differently. So how do you get that right every single time?” That winning formula, says Tej, is “the secret sauce.”

See SmartUp’s next legs of the trip here:

Check out San Francisco’s own Switzerland – the swissnex tech hub on the Bay.