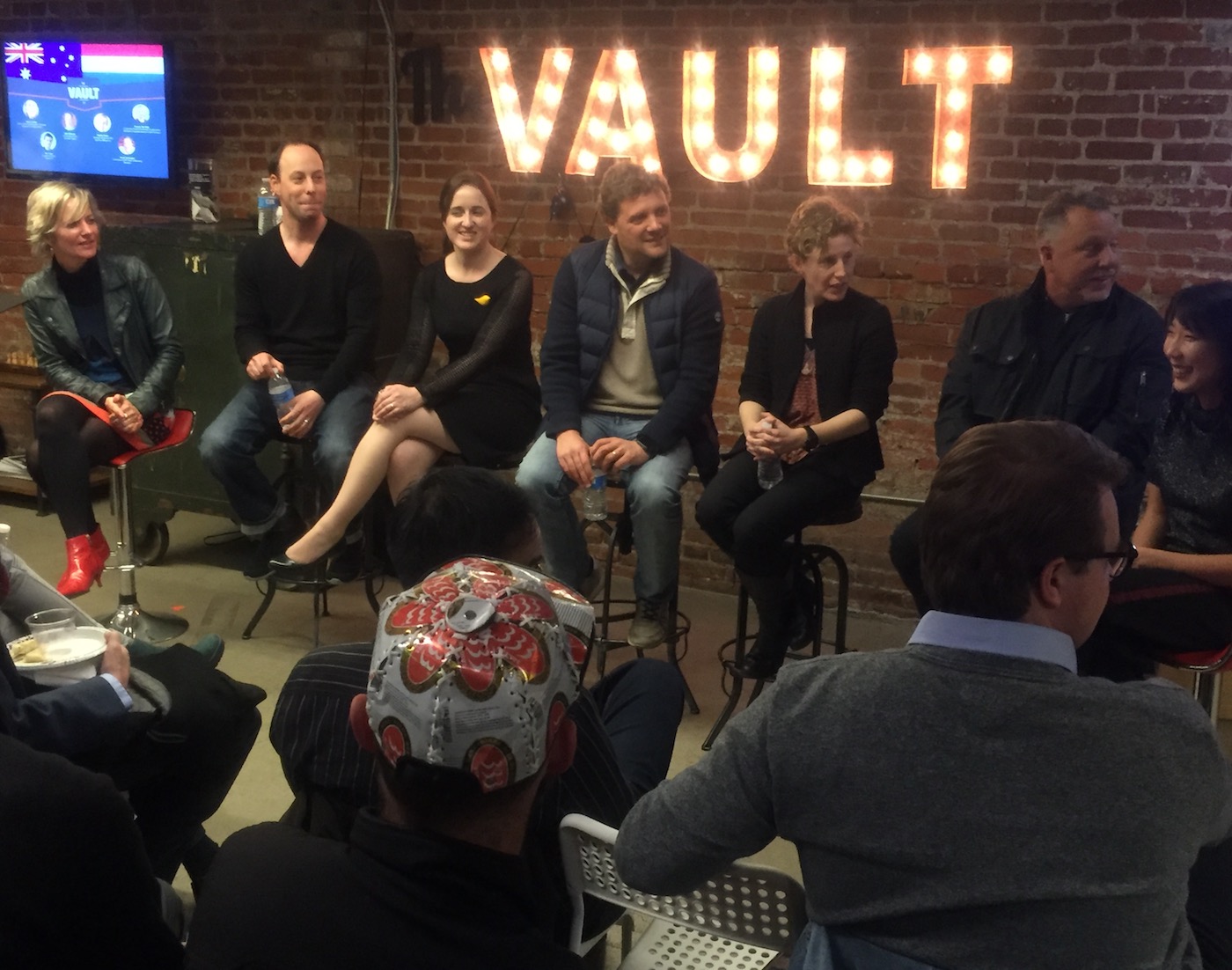 Entrepreneurs, startup founders, and aspiring techies from all over the world are coming in droves to SF. They all want to know the answer to this burning question: how do you get the most from a San Francisco immersion? Last week representatives from two divergent countries, Australia and Holland, took the stage at  SF’s The Vault, an internationally plugged-in incubator, and shared their best insights.

One: Connect with The Natives

Make connections, both with natives and arrivals from your own or neighboring countries. The French and Swiss excel at professional startup networking in San Francisco, each by hosting dedicated physical spaces with comprehensive programming in San Francisco. The French have two: PARISOMA and the French Tech Hub. The Swiss have the superb swissnex incubator, providing a hub for Swiss startups, corporates, students and artists in a premier all-in-one space by San Francisco’s Exploratorium on the waterfront. Then there’s the Palo Alto-based Nordic Innovation House, a “soft landing space” and “community of peers, partners, investors and service providers” for Nordic startups (from Finland, Sweden, Denmark, Iceland, and Norway) doing business in the US. Few other European or Asian countries approach this higher level of infrastructure and investment. That higher bar means that for the Aussies, Dutch, and others making the SF pilgrimage, hustle is paramount. It’s critical to pursue other means of networking, and to sponsor and attend events, as well as to land in an incubator. Connecting is also about developing good local PR, and a coherent mission and focus. Given that the Dutch were the second largest startup contingent (behind the French)at CES  this January, the ante is increasing. Countries are competition for attention, so we can expect more foreign hubs to open in SF and Silicon Valley.

You need a landing plan or map. The Dutch have one. The Aussies do too. They’re stamped with their own particular brand of expertise from early expat techies. The Dutch call their guide the Silicon Valley Playbook, and it’s available to anyone online. This guide helps visitors navigate culture differences, perfect their pitch for American VCs, dress for the fickle Bay Area weather (layers help), and generally adapt to the fast-moving SF tech scene. Maaike Doyer, strategy designer and CFO of Business Models, Inc, a Dutch-born international strategy firm that helps clients innovate, from idea generation to validation to execution, helped create the Playbook: “a really fun collaboration” that helps startups acquire the “mindset, tools and skills to prepare themselves to scale.” Maaike was joined on the panel by fellow Dutchwoman Karin Louzada, Senior Advisor for Innovation at the Consulate General of the Netherlands.

Then there’s the Aussie Founders Network, a support service for startups from Down Under, offering a nationwide constellation of physical Landing Pads. Market-ready startups and scale-ups can get a 90-day residency in a local co-working space to help them grow by facilitating in-market business development, introductions to investors and mentor networks and strategic partnership opportunities. Frances van Ruth of the Australian Trade and Investment Commission in SF and an expert on the local ecosystem, credited the pioneers, “founders who had come before, become established, and now have a real desire to help new founders.” Two such early founders were on the panel: David Cannington: Co-founder and SVP Sales & Marketing at Nuheara, and Nick Ellsmore: Co-Founder & CEO at Security Colony.

The panelists talked up commitment. Silicon Valley tourism, they said, doesn’t offer much more than a superficial awareness of the region or a chance to expand your social media profile. The cursory visit where you fly in for a week or two, tour some tech firms, and head back home just doesn’t cut it. Pim Tuyls, Founder & CEO at Intrinsic ID, talked about how he tried straddling his home base of Leuven in the Netherlands and his new residence in Silicon Valley for a year, and then realized he couldn’t gain traction in either cities.

Until you make the official commitment to live here full-time, “You never belong to California, you don’t belong to the community, and you don’t belong to the ecosystem,” he said. “Once you come here, that changes.” Pim made the commitment, and it’s worked for his digital authentication company Intrinsic ID, well-funded and now based in Sunnyvale.  It’s a story we’ve heard before. Risto Lähdesmäki, the founder and CEO of the UX design firm Idean, also split his time between the Bay Area and Europe for a year. But he took it to another level. He spent so much time at the Sheraton in Palo Alto that the staff knew him by first name. Clients thought he lived in Silicon Valley, a perception that enabled Risto to close major local sales deals. Eventually Risto moved his Helsinki company’s headquarters to Palo Alto, and it worked: last year the firm was acquired by the French consulting giant Capgemini.

Four: Learn from Each Other

Learning from other foreign entrepreneurs is key. The Europeans host an annual, massive weeklong conference focused on startups and scaleups. Startup Europe Comes to Silicon Valley (SEC2SV) brings together the most relevant founders, corporates, investors, and policymakers from the EU entrepreneurial ecosystem and Silicon Valley in engaging meetings and workshops, forging meaningful long-term relationships. Last year 600 people from a wide range of EU countries were represented, and it was an ideal forum to learn what works and what doesn’t. And, then, of course, there are countless events, at the French Tech Hub, swissnex, and The Vault’s mashups – designed to bring two unusual countries together – around the Bay Area. Last week’s sold-out event, moderated by the incubator’s new General Manager Soya Seo, was well attended by locals and internationals alike.

It’s no accident that the first waves of entrepreneurs to arrive in San Francisco during the Gold Rush came from Europe, China and Latin America. They had the drive and the ambition, and they saw the potential. Today’s boom is no less pivotal to the region and to global business. The promise is big, the chance to expand in the US’s huge market. “Thinking big or thinking small, takes the same amount of energy,” said Pim of the opportunities to scale here in the US. “It’s the same amount of energy but it’s different mindset.”