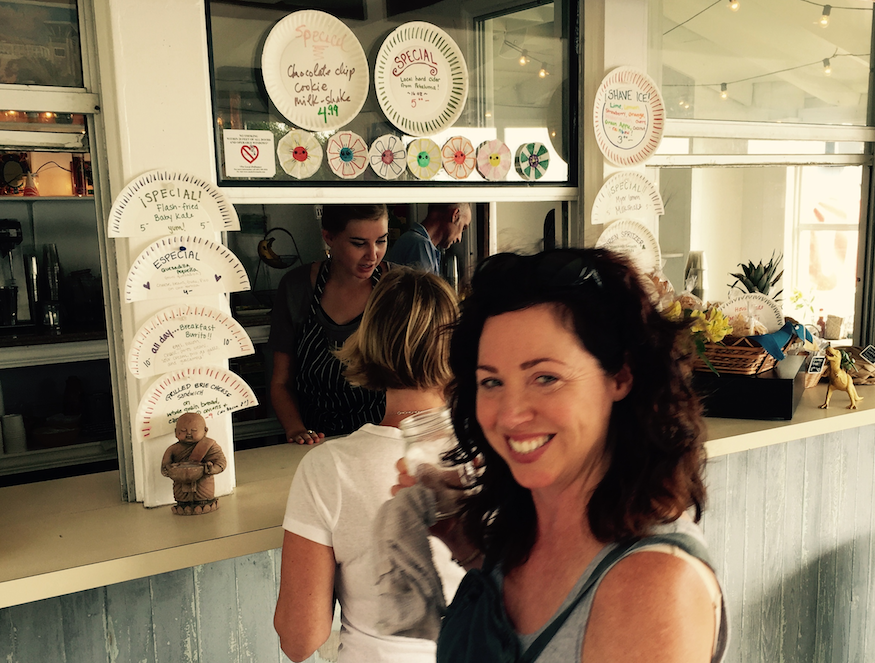 Mary Margaret Stewart skipped math and history for art classes, and upon graduation from high school in Pittsburgh, Pennsylvania, couldn’t get to Europe fast enough. She fell hard for Paris, and for her first love, and that summer abroad became a year, then two, then six. Yet a nostalgic tug of childhood memory kept drawing her back.

At eight, Mary Margaret and her cousin James first stumbled upon tiny La Crêpe Suzette in Rehoboth Beach, Delaware, during an annual family summer vacation, and became entranced by Constance Douat and her delicious 75-cent crêpes. “She was French and exotic and beautiful,” said Mary Margaret. “I loved her sugar and butter crêpes, I loved her Frenchness.” Hanging around La Crêpe Suzette became a summer rite. At twelve, she and James were hired for part of the summer, and incredibly, when Douat opened a small bakery, the two youngsters began managing the crêperie. Mary Margaret was fourteen, James sixteen, and they were on their own, off-loaded by their busy parents who were only too happy to see them thrive. They took rent-free housing in a condemned and “scary” Rehoboth hotel, making sugar crêpes, doing all the shopping, and bicycling home in the night (Mary sitting on the handlebars) with the cash in small white paper bags. “We worked from 8 a.m. until midnight, with an afternoon break,” said Mary Margaret. “Seven days a week, for three months.”

Nostalgia influences our choice of work and life in mysterious ways. For most of us, our childhood dreams fade, replaced by the conventions of adulthood. But Mary Margaret not only realized her childhood dream – to work in the popular little crêperie in the beachside resort that she adored ­– but also held onto that fantasy throughout her tweens and most of her twenties. She studied at a fashion design school in Paris for four years, yet every summer she’d cross the Atlantic to work at La Crêpe Suzette. In Paris, in her closet-sized studio apartment, she made clothing that she sold at the Marché aux Puces de Clignancourt flea market. One day, a Japanese buyer asked if she could make a thousand of her stretchy, sexy garments. “Yes!” she replied, not knowing how she’d pull it off. “I ran out and got a studio, recruited a friend and started wholesaling a line to Japan.” The business flourished, and life went on. Mary Margaret fell out of, and then into love, had a daughter, and soon realized she’d married the wrong man. It was finally time to come home. She opened a shop in Pittsburgh and met her future husband. Another decade passed, and then on a whim she moved to Northern California, her husband joining her when he got a job in Silicon Valley.

Six years later, “she stumbled upon this place.” Her brother loved to body surf in Stinson Beach, a stunning three-mile sand spit north of the Golden Gate. One day in August of 2013, she joined him, and they ambled up to a gray, weathered snack bar at the southern end of the beach under the lifeguard tower. The snack bar sold fish and chips. At the counter, a little hand-scrawled sign said, “This business is for sale.”

The owners weren’t there that day, so Mary Margaret came back and gave them her number. When they didn’t call, she sent a card, writing that she’d been dreaming all her life of running a beachfront snack bar. Weeks passed. They phoned her after Labor Day. Multiple parties were interested, negotiations were tense, and there were other hurdles. The snack bar was affiliated with the National Park Service, and the contract paperwork was byzantine. Months passed. Finally, in March of 2014, Mary Margaret closed on a three-year lease, and in late June of that year, opened for business.

She didn’t know what to call it until a friend asked, “What’s free advertising twice a day at the beach?” She thought for a moment, and then said, “The siren.” Twice a day, at noon and five p.m., Stinson Beach tests its emergency siren with a thunderous blast. She had no doubt about her concept. “I knew I wanted it to be über-simple,” said Mary Margaret. “I wanted to create a space that people would walk into and love. I wanted crêpes. I wanted it to be like the place in Rehoboth Beach.” Perched on the dunes, sheltered from the wind and sun with an L-shaped southwest corner that boasts full windows, The Siren Canteen has a 1960’s vibe, like an image torn out of a classic copy of Sunset Magazine. It feels part of the beach, tucked into the dunes, surrounded by brush and grasses. The lifeguard tower rises above, lending weight. Two weathered picnic-style tables festooned with flowers and bright yellow umbrellas stand in the sun, while several other tables with benches hug the windows offering a panoramic view of the surf and beach. The Siren embodies playfulness. Three chalkboard menus flank the bar, and on the side there’s a whimsical one with cute colored kid-like drawings of popular items. Paper plates attached to the windows and window jambs feature additional items in bright colors. Crêpes were a hit at first but as the crowds grew, and the incredible California weather continued, Mary Margaret focused more on her standards: fish and steak tacos, burritos and, of course, burgers and fries. Lagunitas IPA is popular with the locals, and all of her fare is “healthy sustainable when I can, organic when I can.” On prime beach days, The Siren serves several hundred people, and this summer Mary Margaret’s daughter and cousin James are pitching in at the Siren, giving it a family feel. They often sit and chat with customers. “People love that,” said Mary Margaret. “We’re creating a space. People like the little twists. The fresh pickles and salsa. The Meyer lemon milkshakes. The paper plate signage.” Next summer, the circle may be complete: the seventy-year-old Constance Douat is planning to come to Stinson Beach and help out.

On a recent sunny Friday afternoon at The Siren, Mary Margaret confessed that after all these years, living abroad and working in fashion, she had found her bliss. “I love pleasing people through food and aesthetics,” she said. “To create a small, funky spot, say it’s yours and run it? I think this is a lot of people’s fantasy.”

With its prime beachfront location, quirky vibe and tasty fare, The Siren has become a destination. Six rehearsal dinners are lined up for the next six weeks, and there are multiple inquiries for weddings. While we talked, a man in shorts and sandals walked over. Mary Margaret smiled easily as she took in his demeanor. The man was probably fifty, and his relaxed expression revealed The Siren was working its charm, taking him back to a simpler past. He was interested in hosting a party here. “It could be September,” he said dreamily, looking around with contentment. “It’s such a cute spot.”