The Future is Female, and It’s Already Here 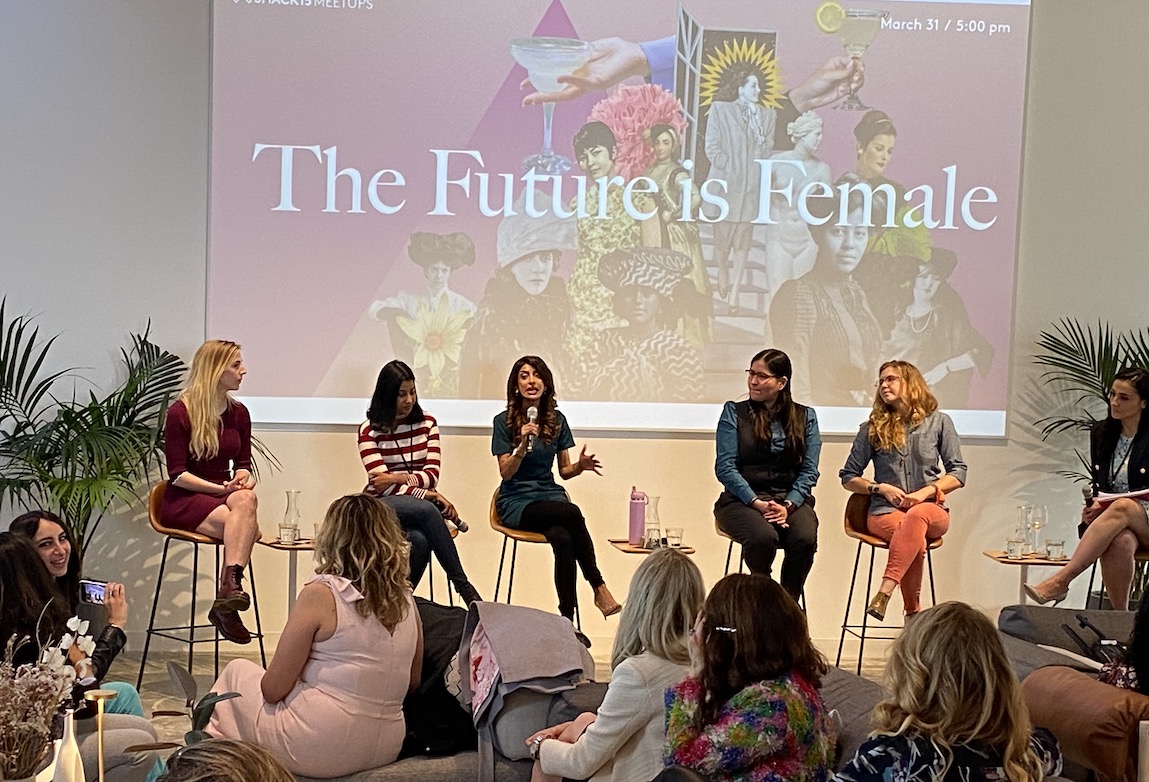 Women are taking charge in business, was the message last week at Shack15’s engaging “Future is Female” event. A packed crowd of nearly 200 mostly female investors, entrepreneurs and others united to celebrate women’s power, represented by an impressive panel of women leaders from robotics, classical music, venture capitalism, crypto, and food entrepreneurship. The common thread: women are achieving entrepreneurial success despite the challenges of working within a male-dominated system often rigged against them.

Opera singer Dalyte Kodzis opened with an aria from Bellini’s Norma, accompanied by pianist Elektra Schmidt. Kodzis introduced the piece, explaining that the theme of a prayer for peace was intentional – given the brutal war in Ukraine. Her potent, piercing voice set the tone for the evening. Clearly it was time to listen up.

The event’s panel was moderated by the journalist Sanaz Tahernia. No standard entitled male founder brag-fest here. Every one of the five panelists expressed humility and respect for one another. Empathy was a common motivator as they described their entrepreneurial journeys. And, sexism a constant threat.

Komal Ahmad, founder of the Y Combinator-accelerated food recovery non-profit Copia, told a moving origin story of how she came up with the idea for her company in 2015 as an undergrad at UC Berkeley. One day in People’s Park, she met a homeless man in who hadn’t eaten in three days – directly across from UC Berkeley’s food service, where literally tons of edible food were being discarded every day. With her entrepreneurial knowhow and spirit, she quickly made inroads to the university’s food management, eventually scaling to new donors, and devising a mobile marketplace solution to match providers with those in need.

Jessica Bejarano is founder and music director of the San Francisco Philharmonic and a board member with the youth association of California symphony orchestras. Growing up in East LA, she didn’t discover classical music until the age of 18. Transfixed, she instantly knew she wanted to become a conductor, without realizing that it was seemingly impossible (prominent women conductors didn’t exist in the US). Many naysayers stood in her way, including a grad school professor who told her to “go back to her country.” Fighting bias in academia was just the start. Now, she makes it her mission to evangelize for diversity, equity and inclusion among underrepresented voices in classical music.

Maryanna Saenko, co-founder of Future Ventures, invests in “the kinds of companies that history books one day will be written about, the companies that do not prey on frailty.” Her portfolio includes companies working on tech for good, nuclear fusion, neural implants, and biotech that helps bolster bees’ immune systems in the face of global hive colony collapse. She too had to overcome ugly male bias. Saenko recounted how, while a graduate student at Carnegie Mellon, she presented some research and was told by one of the male corporate sponsors, “Little girl, we’ll take it from here.” She pushed back, was supported by her mentor, and “the entire course of my career trajectory changed in that moment.”

Sampriti Bhattacharyya is a roboticist, former NASA aerospace engineer, inventor and co-founder and CEO of Navier, a self-driving electric hydrofoil designed to mitigate traffic and automobile congestion in coastal cities by providing an alternative access route. A scientist at heart, she described her trajectory in a data-centric way. Growing up in India, “the best that was expected of me was probably working the front desk or being a housewife,” Bhattacharyya said. Going into aerospace, nuclear engineering, and later robotics as an immigrant woman of color, she didn’t fit the pattern. But she learned not to think of herself as a “victim of statistical regression models. The way you change perceptions is by creating your own data points.”

Tove Andersson, founder of KryptoGäris, was bluntly told that creating a network for women crypto investors in her native Sweden, where the crypto community is 95% men, was a “stupid idea.” She responded by doing it anyway, boldly creating a “sacred space” for women to learn about crypto, and now leads the largest crypto investor network in Scandinavia for women in Web3. She credits her father with teaching her to be fearless in her intellectual pursuits – studying string theory and parallel universes – then creating her own reality in the face of those who would hold her back.

Transformative events that celebrate women in leadership are a great step in realizing our dreams of equality and access to the inner circles. “There’s never been a better time in human history to be a woman. There’s never been a better time to be a woman of color,” said Komal Sharma. “And that doesn’t mean that we are equal. Our work here is not done. But it has started.”

The future is female, and it’s already here.