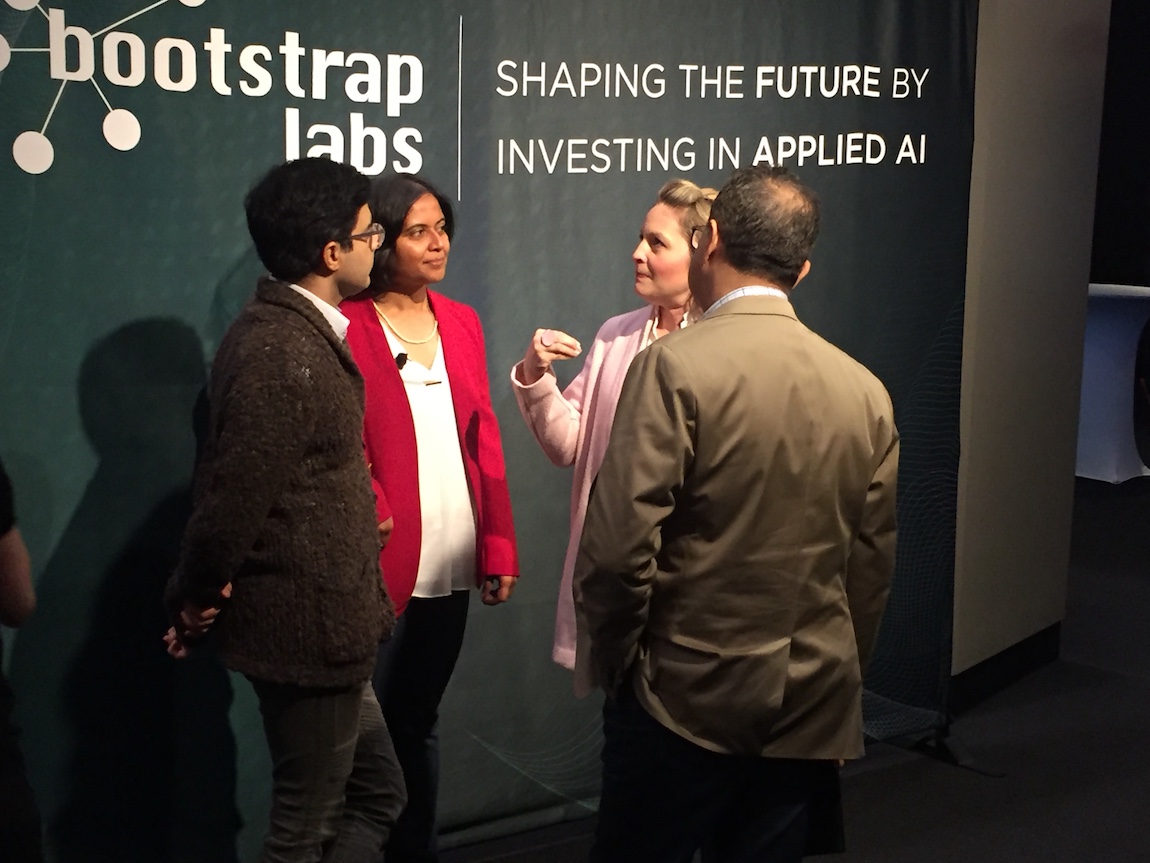 “AI is like sprinkles,” said Jaime Fitzgibbon, Innovation Strategist for Booz Allen Hamilton, with a knowing smile, as she kicked off the Enterprise Applications in AI panel at the BootstrapLabs 2019 Applied Artificial Intelligence conference. “My kids love them on everything – on toast, on cereal, on spaghetti. But helping them manage where it’s appropriate to put sprinkles feels a little bit like managing enterprise on where to put AI.”

The AI symposium at Westfield San Francisco Centre’s Bespoke in San Francisco was packed with a full slate of keynotes and panels on everything from machine learning in gaming to national security and digital health.

(We couldn’t possibly squeeze all the insights from AAI19 into one story, so here’s part one in our series. In the coming weeks, we’ll give you an inside look at the wizard-like Danny Lange, head of AI and machine learning at Unity Technologies, whose fascinating talk and videos illustrated how artificial general intelligence works. We’ll also offer a taste of how Whole Foods and AgTech are applying AI to transform the food industry.)

The AI and Enterprise panel brought together some of the day’s most compelling corporate experts. They touched on issues, pain points and opportunities critical to nearly every practitioner in the room, not to mention virtually every major CEO in America. Fitzgibbon kept the momentum going by posing key questions to her panel:

The headline: AI investment is accelerating, and happening earlier in the corporate pipeline. Innovate faster by making AI enterprise development more inclusive of non-data scientists, advised the panelists. Rahul Sachdev, Co-Founder and CEO of Fortella, emphasized the importance of getting clean data, especially when using labeled data in supervised AI learning models, some of the most effective uses of automation. “Predictions are great when you have lots of data available,” Sachdev said, “otherwise they’re not.” Alex Holub, Co-Founder and CEO of Vidora, threw out an intimidating statistic. He said that as a data scientist, “80 to 90% of your time is spent in these early parts of machine learning pipeline.” While “everyone wants to work on building the next neural network,” in reality, many data scientists struggle to get past the early data cleaning stages of “data wrangling.”

Fitzgibbon, whose technology consulting practice at Booz Allen Hamilton revolves around managing strategic partnerships with government contractors and startups, added that while many companies are trying to scale with data scientists, “I don’t know that we’re going to have enough data scientists to really scale to the need.” Bahman Bahmani, Director of Data Science at Rakuten, addressed the scaling predicament when he spoke of workforce development opportunities in “data cleaning, data preparation or evaluation of their models – things that don’t require a lot of sophistication.” Rakuten has created “a role that we actually call data wrangler,” he noted, with the training of junior level employees opening up a new career path. Data wranglers typically advance into other positions. “They grow into machine learning engineers, they grow into data scientists. And while they grow into other roles, they can train their successors, and the next batch of data wranglers. This gives you an economy of scale.”

Regulations as Drivers for Automation

Fitzgibbon raised a timely, politically charged subject: regulations stemming from the central application of AI systems to track people’s identities, behaviors and intent. “In many countries, Europe being an example now – and in California it’s coming – the right to forget is really, really important,” said Sachdev. “So you have to architect your systems to make sure that if the customer does come to you and say, look, I want to be forgotten,” then your company has to have processes and technologies in place that allow you to do that.

On the flip side, regulations may actually end up promoting more automation. Bahmani of Rakuten spoke of the “unstructured documents that have a lot of personally identifiable information (PII) in them… if they are processed in a fully automated fashion, they are completely compliant with the regulations.” But there’s a caveat. If a human needs to look at them, “that starts to become problematic because if the PII gets exposed to the human, that’s going to cause all kinds of issues.” In that case, the compliance requirement “pushes the balance more towards automation, towards using AI to process those documents.” The result? We’re heading toward a new balance between human in the loop, he suggested. This will lead to more dominant AI control.

The Promise of AI

The packed room of 700-strong AI enthusiasts brought a core belief in AI’s potential, and the enterprise panelists shared their optimism. Creativity is the biggest promise, said Sachdev. “Freeing up people from their mundane tasks so they can be liberated to do their best.” Holub of Vidura echoed his sentiments: “enhancing people to do more with their natural skill. The big promise of machine learning is letting people do more.”

Vidya Raman, Director of Product Management and Machine Learning at Cloudera, spoke of AI as a “north star” that allows companies to “monitor value, save money or bring more money into the business.” This gives a “clear time horizon” that has “implications in terms of the number of people you hire, the kind of tools that you procure, the kind of processes that you put in place.” Raman advises companies wanting to adopt ML and AI to “fall in love with the problem before falling in love with the solution.”

Sachdev spoke of the importance of good product design. “The best form of AI solutions are the ones where the user doesn’t know it’s being powered by AI.” His point was telling, and à propos, because seamless product design and great UX cuts across all sectors. Everyone in the room was thinking about what’s under the hood. Not just from the perspective of enterprise applications in AI, but from the fundamental understanding that great experience design may be the defining factor of success.

Stay tuned for the next story in our series on Applied Artificial Intelligence as we cover Danny Lange, head of AI and machine learning at Unity Technologies, on artificial general intelligence through gaming. We’ll also discuss Whole Foods and AgTech’s applications of AI in the food industry.