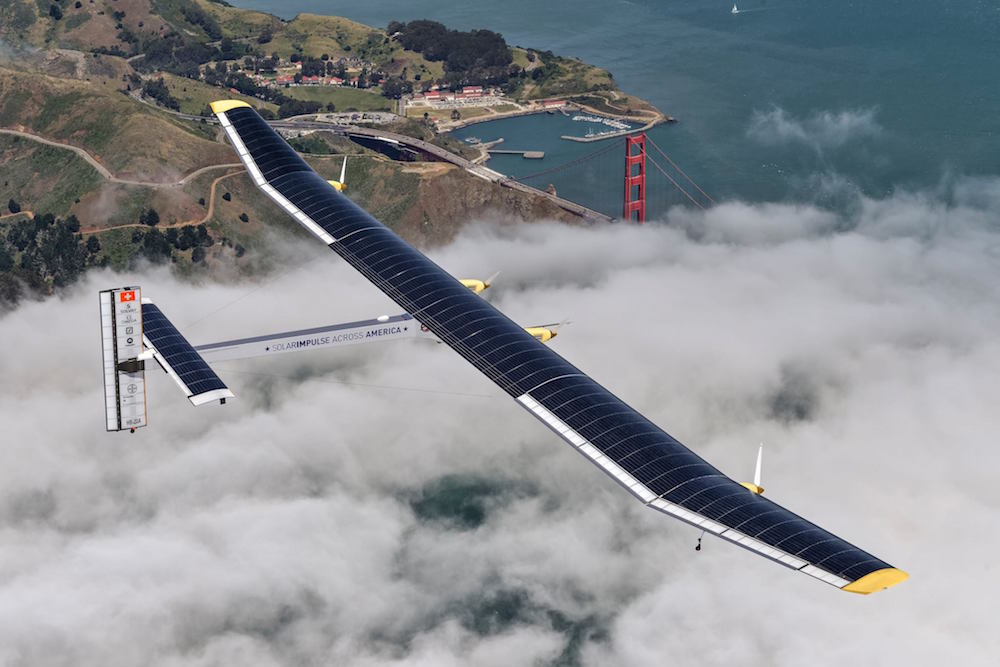 If only Richard Branson, Jeff Bezos and Elon Musk had stood next to us on the cliffs and marveled at the promise etched in the sky. We waited and waited and waited and then a tiny line appeared high above, then slowly, almost imperceptibly expanded as it approached, turning dramatically over the red towers of the Golden Gate, preening like some giant mythological bird, a one-of-a-kind man-made propeller craft with the wing span of a Boeing 747 jumbo jet inching so slowly across the blue sky that you wondered why it didn’t fall like Icarus. Solar Impulse 2 had finally arrived from Hawaii after a flight of two and a half days, on the most recent leg of its historic attempt to circle the globe, without expending a drop of fuel or spewing an ounce of carbon into the sky.

What could be more innovative than marshaling efforts to save our fragile globe? Logic tells us the wisest application of entrepreneurship, technology, capital, and brainpower would be to slow our impending ecological Armageddon. But here’s the irony. This marvelous solar-powered plane has had to overcome not just damage and several lengthy forced layovers from storms, along with batteries fried by the sun, but also the strain of attracting new funding to keep going.

Solar planes aren’t sexy to today’s plutocrats or, for that matter, the media. The Billionaire Rocket Boys – Branson, Bezos and Musk – toss billions at developing spaceships for the uber rich. They speak of “green” space travel, while scientific studies continue to show that a vast proliferation of rocketships would tear more holes in the ozone and give us more skin cancer and cataracts. While some rocket joyride companies promise to pollute less than others, tremendous amounts of energy and resources are required simply to build these multi-million dollar space playthings for the ultra wealthy. They are anything but clean. Meanwhile, this daring experimental plane, born out an idea based in Switzerland, has struggled for attention and funding for technology and engineering that might one day help make routine aviation nearly carbon-emission free. The Solar Impulse 2 is a marvel, with wings that span over 200 feet, three times its length. More than 17,000 solar cells feed the plane’s lithium polymer batteries. Day flights are at the stunning oxygen-deprived altitude of over 27,000 feet to soak up more of the sun’s rays, whereas evening flights are at just 5,000 feet. Top speed is 55 mph, slightly faster than a normal roller coaster.

Google boss Sergey Brin was at the airfield to greet him, saying: “It was a beautiful landing, we were right there watching.” Before celebrating with champagne (Moët Hennessy and Google are sponsors), Piccard talked of the promise that perhaps one day the world’s mega-billionaires and venture capitalists will see in focusing on technologies that might dramatically curb carbon emissions.

“It’s a new era. It’s not science fiction. It’s today,” Piccard told CNN. “It exists and clean technologies can do the impossible.”