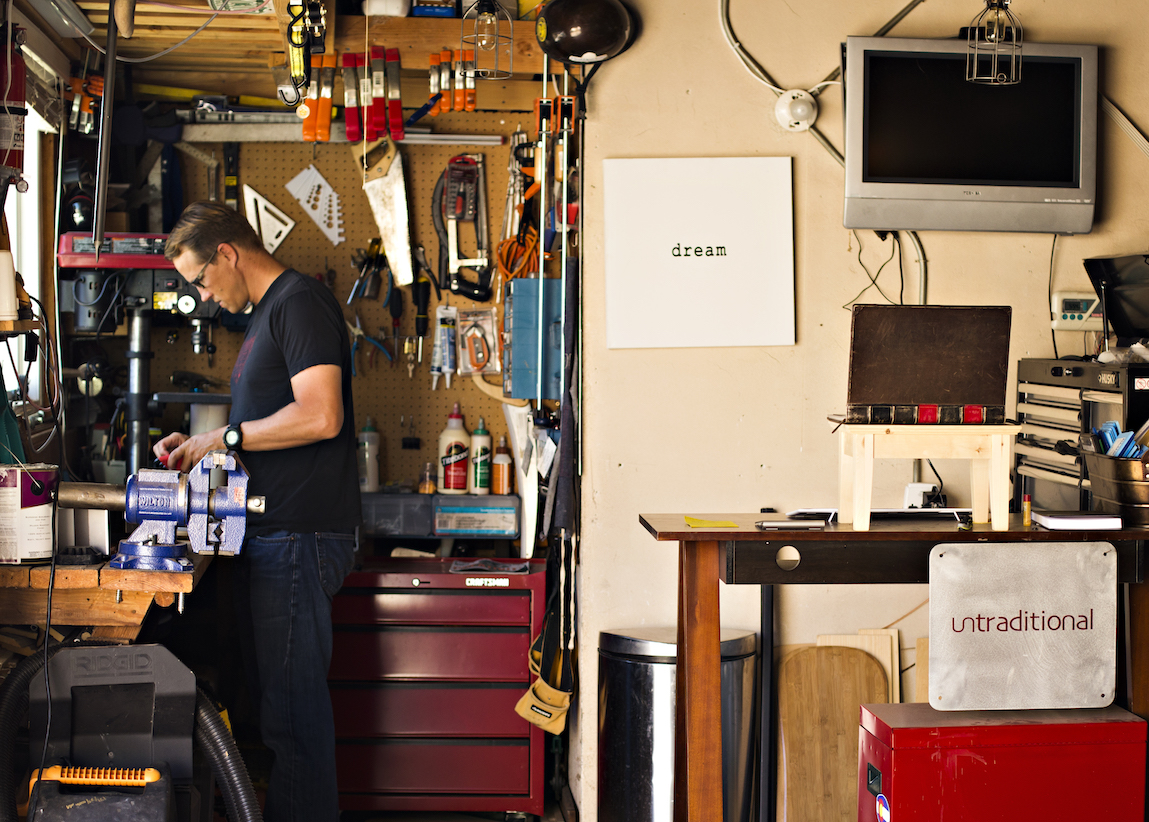 Strong, hard-driving, and ready for action, the Athlete is the entrepreneurial type no startup can live without. Athletes dig in when the competition heats up. They’re great at juggling a blizzard of tasks and think nothing of mastering something new on the fly. The more pressure, the better: facing daunting deadlines, embracing challenges without hesitation, that’s what makes it real! Today in our excerpt from The Entrepreneur’s Faces, you’ll meet Joel Heath, a man who brings the Athlete’s forward-leaning mindset and intuitive, iterative approach to product development. Stuck in the old cliché of corporate life, Joel dreamed up and launched FluidStance, a company whose mission is to get millions of workers unstuck and in motion.

People grow in different ways. Athletes learn from movement and the unpredictability of the wild. The Athlete loves a contest and a challenge: they climb rock faces, venture into fearsome surf, slalom down perilous slopes. They relish preparing for the… unexpected. Adapt, recover, pivot is their mantra. Athletic entrepreneurs intuit the connections between seemingly diverse activities, building new opportunities around what they love: motion. Models: Yvon Chouinard, Founder of Patagonia. Nick Woodman, Founder of GoPro.

Joel Heath was an athlete who exuded cool, a competitive swimmer and outdoor enthusiast who grew up in beautiful Boulder, Colorado, with a deep love of the outdoors. Upon earning his business degree he had a simple goal: to get into traditional ski mountain management by taking a job at Vail’s ski school. But then, a chance internship at the local tourism bureau gave him a taste of a new, fast developing trend. Adventure sports were quickly rising in popularity, and Joel spied an opportunity to entirely reimagine the mountain experience, launching his first company, Untraditional Marketing, Inc.

No one had done an event quite like the one Joel dreamed up for Vail. He took niche sports and activities such as rock climbing, kayaking, adventure racing, mountain biking, and trail running – 27 different events – and threw them all together into a wild mix called the Mountain Games. “It was cool to see,” said Joel. “We just kind of jammed a lot of different but similar people into the same town.”

The Mountain Games was all about cross-pollination. For the first time, outdoor enthusiasts could witness a myriad of sports and radical athletes in one iconic, sprawling mountain setting. He was tapping a pain with a novel product. Mainstream companies finally had a viable means to sponsor adventure-related sports, and Joel was neatly positioned to capitalize on that demand. His brand and promotional agency attracted major clients – just as the Mountain Games quickly rose to become the world’s largest outdoor adventure event, broadcast on NBC and CBS. Joel, meanwhile, was carving out a natural philosophy around work and engagement, starting with the concept that work and play don’t have to be separate. He began to hold staff “chair” meetings for Untraditional on the brief chairlift rides up the mountain. “We shortened conversations,” he said. “It was a healthy way to dialog.” They worked hard, while also maintaining a “six-inch powder rule”, where there was an understanding about their shared passion. The workday could be truncated when the snow was great.

Surrounded by Vail’s spectacular mountains Joel felt the conflict between traditional business culture and nature. “Business seemed to want to make the world flat,” he remembered thinking. Everything was about safety. Chaining people down. Locking their feet to the floor. Not moving for hours. This traditional approach to work struck Joel as outdated, especially given Untraditional’s success. Instability was where he saw dynamic growth.

“You know, true flatness makes you sedentary, and a sedentary life is a dangerous one. It’s like a river that doesn’t flow, like the person who says, ‘I think I’m gonna stay home.’ And the same things held true in my mind for how we work, so I just set out on a journey with a purpose to help set the world in motion.” Joel couldn’t know it at the time, but his years in the wild, inventing and launching the Mountain Games, were preparing him for an entirely different sort of entrepreneurial challenge. One that would soon lead him to probe a simple, yet fundamental way people might shake free of the drudgery of office routine. And stand up for themselves.


The Athlete’s Journey: In life and work, we sometimes forget that we’re physical, spiritual beings, influenced as much by passion as logic, planning and money. Joel’s path will remind us that we don’t need to be an Athlete to understand how intangibles can inspire us to get moving. To listen to what our bodies and gut are telling us. Joel’s first big wins in marketing the Mountain Games put him in the eye of a storm that had been brewing for years. Smart phones, the Internet and wireless technology ushered in a new era for the mobile worker. But Joel was just the man to see that, technology aside, our bodies are often pretty much still stuck. And he had an idea to set us free.


Next week: Risto Lähdesmäki, The Visionary