The Bitcoin Bubble and the Buddhist 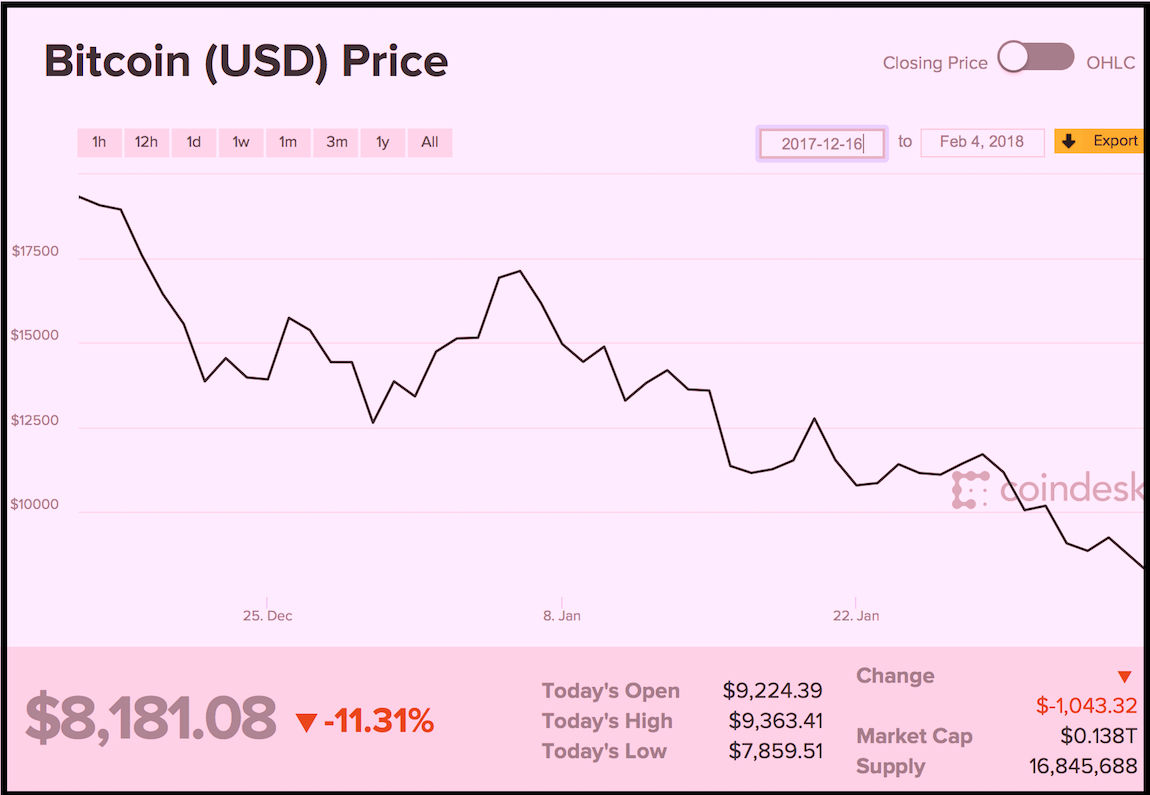 Last December, I briefly flirted with the bitcoin craze. By chance I got an intimate glimpse into the frenetic “don’t miss this boat” mania that has gripped tech enthusiasts and speculators worldwide, a front row seat at an event that in many ways that was not unlike one of those weekend “sales” presentations on the “tremendous” opportunity of a timeshare, undeveloped land in Florida, or easy money flipping houses. The main difference here was the sheen of new technology. The setting was a New York tech incubator with a glamorous “crypto expert” proselytizing on the money-making prospects of buying bitcoin. The presenter and moderator were women, and the audience was nearly all female. The better half was being enthusiastically courted to buy into the next big thing.

Sitting in the audience, I pulled out my phone and marveled at the hockey-stick trajectory as bitcoin teetered near $20,000.  Others around me opened up accounts on the spot and clicked away their hard-earned cash. I didn’t bite. Instead, I dashed off a story about why I thought bitcoin was headed for a fall, and then watched somewhat incredulously as it happened before my eyes. Bitcoin lost a quarter of its value in days. Now, less than two months down the road, it’s at less than half of its December high. Those women in the audience were suckered, and they lost thousands of dollars, and I feel for them. I also wonder about the ethics of the woman at the front of the room gleefully leading her sisters over the cliff.

If there’s one thing we’ve learned in this ugly #metoo year in tech, it’s that women should stick up for each other. And that includes being smart about the speculative nature of supposed newfangled tech innovations. That means putting being informed before cheerleading.

This week brought the following damning developments: the largest hack to date, $524 million, on the Japanese crypto exchange Coincheck. Revelations that the prices of Bitcoin and other digital tokens may have been artificially propped up by a widely used exchange called Bitfinex, which fired its auditor amid reports of a subpoena issued by a US regulator. Similarly, there were news reports of altcoin “pump-and-dump groups”, thousands of traders who come together to transact simultaneous purchases, thereby artificially inflating the prices so that they can later collude to cash out en masse. In South Korea there were troubling bitcoin exchange hacks, possibly directed by their notorious neighbor to the north, a brutal dictatorship which just happens to be threatening the US with nuclear Armageddon. Amidst all this negative press, it’s becoming increasingly hard to separate the legitimate players from the scamsters, the real-world, human buyers from the algorithms.

Even Nobel Prize-winning economist Paul Krugman weighed in this week: “So is Bitcoin a giant bubble that will end in grief?” he asked. “Yes. But it’s a bubble wrapped in techno-mysticism inside a cocoon of libertarian ideology.”

Then came what sounds like a nail in the coffin, Facebook’s sudden reactionary move to ban crypto ads from the platform. “We want to protect the community. That’s job number one,” declared VP of Messaging David Marcus about the decision. “All the legitimate people in the crypto world that I spoke to at least thanked me for what we just did with that move. The reality is the vast majority of these ads were a scam and we cannot allow scams to exist on our platform.” In other words, Facebook is now taking on the role of self-appointed moral arbiter in order to protect its users from bad actors, the online versions of the crypto expert leading the cheers in New York. Google, meanwhile, appears to prefer to continue cashing in on the craze. As I research the topic, “crypto genius” James Altucher’s golden-coined ads follow me from site to site with the line, “The next bitcoin is coming, says crypto genius.”

During the dawn of every new technology, so-called experts emerge to grab the media spotlight and translate to the public how this miraculous stuff works and how to reap instant rewards. In the dotcom era, we were fed hot tips on the next startup from Pets.com to Webvan, to the ironically named digital pseudo currency, Flooz.com, that were going to take over the world – until, of course, they went bust and everybody realized too late that they’d been bamboozled. In 2007 and 2008, it seemed everybody was house-flipping in the booming real estate market, and then that all crashed, and once again a lot of people were ruined.

Call me old fashioned, but I’m a values-based investor with some standards. I don’t buy tobacco stocks or support companies that trash the environment. I invest in companies that make actual products and services – ideally, ones that I myself like to use. I also believe that technology is about efficiency. Such as minimizing your carbon footprint by holding a Skype conference call rather than flying across the globe for an in-person meeting. Bitcoin, on the contrary, is a notable energy hog. Some say the energy required to transact one bitcoin is equivalent to 100,000 Visa credit card transactions. Perhaps if we did some design thinking, devised a way to visualize the amount of pollution pouring into the atmosphere that comes from minting one bitcoin, we might think more about the consequences of the craze. This week I went to The Interval at the Long Now to hear the Venerable Tenzin Priyadarshi discuss ethics and technology. The Venerable has credentials. He’s been a Buddhist monk since the age of ten, and now heads the Ethics Initiative at the MIT Media Lab. He’s also President & CEO of The Dalai Lama Center for Ethics and Transformative Values, and a Fellow at the Center for Advanced Study in Behavioral Sciences at Stanford University.

The Venerable Tenzin suggested we consider the technology we design and how it impacts society. Rather than think about how fast or how big we can make things, he proposed we create products and services with empathy in mind, and think about the well-being and health of society and individuals around us. “Lack of empathy,” he said, “is a public health issue.” Similarly, myopic thinking about our financial portfolios at the expense of valuable human connection, is selfish at best.

Instead, said the monk, we need to “begin the process of thinking of more than just yourself, more than the sense of self-cherishment, to talk about the well-being of a larger group of the population: that’s where wisdom resides.”

I checked back into the blog of the fashionable promoter I’d met in December in Manhattan. I wanted to see where her current thoughts were taking her, and if she was thinking of more than just herself. Guess what? She’s been blogging away as the resident crypto enthusiast at the New York Observer, strangely opining two weeks ago that “Bitcoin’s reputation has been improving — a lot.”

Not if you’ve read the real news and looked at the price recently.