Time for a Bitcoin Reboot? 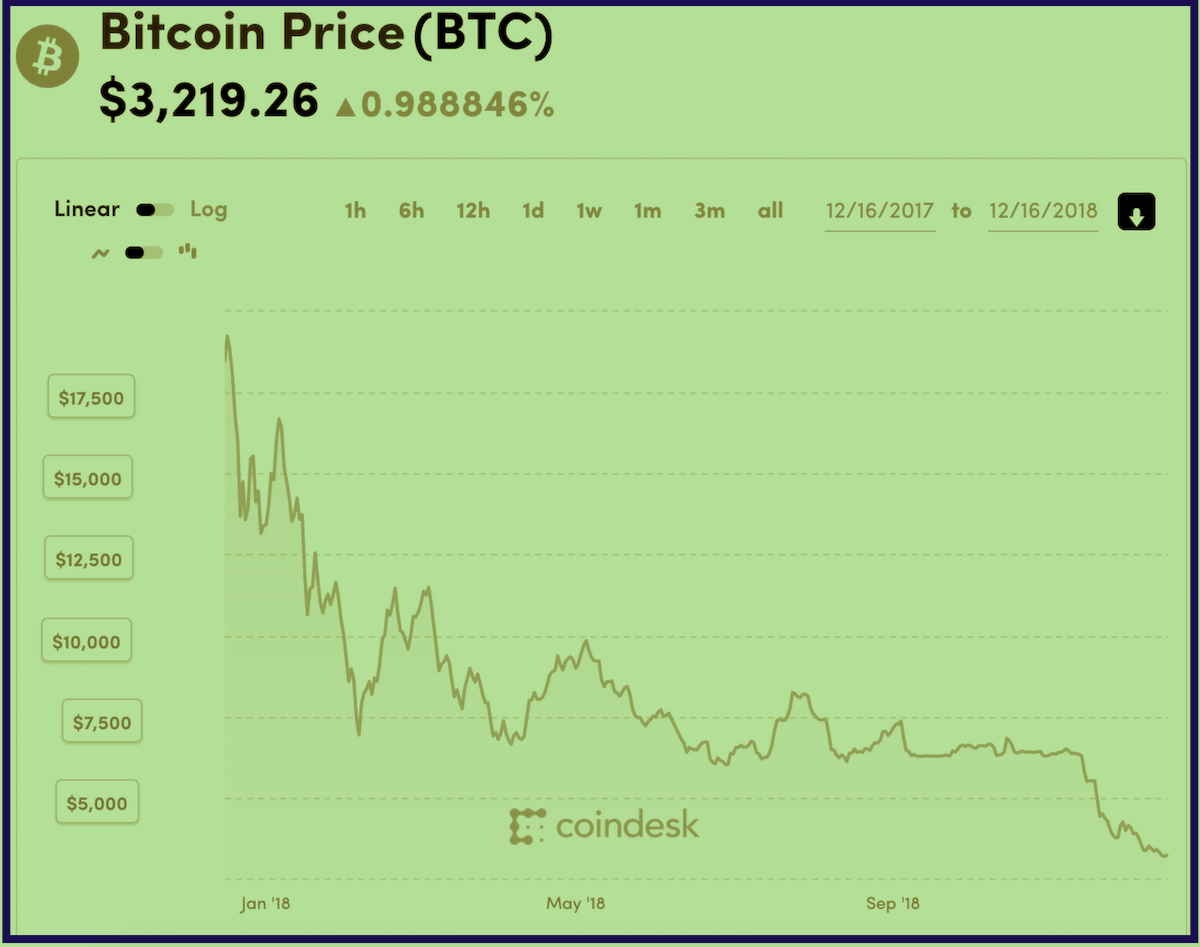 Exactly a year ago, I was sitting in an elite private social club in Manhattan listening to a fashion photographer expound on the virtues of buying cryptocurrencies, while an all-female audience opened up their laptops to buy. When I wrote a story about my own reservations – days before the first crash – I never would have predicted the value would fall so far so fast. Today, $1 worth of bitcoin purchased last December is worth roughly $0.18. Some of those nice ladies who’d showed up to take control of their financial future lost 80 percent of their hard-earned cash. But the dramatic slide didn’t just wipe out naïve investors. Plenty of Redditors and unnamed others have lost fortunes. Huge corporations that should know better, confusing a short-term blip for a long-term trend, dramatically reshaped their business models just in time to lose billions. Why did bitcoin, and so many other cryptocurrencies, plummet in value?

To begin with, there is no central voice of authority, no reliable, trusted source of information, witnessed in the frequent citing of Reddit threads masquerading as industry expert reporting. Instead we have Tim Draper, shouting that bitcoin is “the most secure place to put your money.” The billionaire doubled down this September, predicting a $250,000 bitcoin price in just three years – just before the currency promptly sank another 50 percent to its current level just above $3,000. Then big banks abandoned their plans to build a platform for trading cryptocurrencies. This October, Goldman Sachs scrapped its plans to open a crypto trading desk, citing a lack of confidence in the regulatory framework.

Winter came early. In November, we saw the “hard fork” debacle, when rival factions led by two billionaires within the bitcoin community recoded the Bitcoin Cash blockchain, resulting in the creation of two distinct crypto networks. After weeks of speculation regarding the split, the market finally decided that the uncertainty over Bitcoin SV and Bitcoin ABC had caused a loss of confidence in an already skittish market. Prices again plummeted.

This December, the SEC rejected a proposal from an investment firm to set up an Exchange-Traded Fund (ETF). The fund would have made viable investments in bitcoin on a retail level (anybody with a brokerage account could have traded in bitcoin or other cryptocurrencies), and this would have broadened the holder base and served to stabilize prices. The stamp of approval from a recognized body would have done a lot for credibility. Instead, the rejection leaves it tainted and shows it’s not ready for primetime. This would also have gone a long way toward reducing the influence of some of the more obviously fraudulent bad actors. SEC commissioner Hester “Crypto Mom” Peirce, once considered pro-crypto, announced her ambivalence, saying that a Bitcoin ETF could come “tomorrow or in 20 years,” adding, “Don’t hold your breath.”

Fiat volatility hasn’t helped crypto either. Stock markets have plummeted the last several weeks due to weak growth in European and Asian markets, and confusion over Trump’s trade wars and “Tariff Man” taunts.  Investment is down all around, with major warnings blaring about the coming bear market. Traders on all fronts are losing money, and nobody is looking at crypto as an optimistic alternative to generally safer havens like cash, real estate or bonds.

As traders lost millions, and the mining of crypto – always a dicey, environmentally rapacious proposition – became a money-losing pit, data center mines were abandoned, crypto miners went back to their day jobs, and more mainstream collateral effects took hold. With cryptocurrencies losing 70 to 90 percent of their value in a year, the demand for advanced GPUs cratered. Nvidia, the world’s biggest chip maker, bet the farm this year on producing new chips specifically designed for the mining market. Oops.  By November, they’d amassed a huge unsold inventory, and by this week their stock had lost nearly half of what it peaked at in early October.

It’s way too early to bet on throwing crypto out with the muddied bitcoin bathwater. We need only to look back on the lessons of the dotcom crash in 2000 to see that the boom and bust did more than take a lot of weak players out of the market. It offered a fresh opportunity for new technologies and services to rise from the ashes.

I’m no expert on the financial markets, but I do know a thing or two about user experience. The first thing the crypto community needs is to purge itself of the rampant fraud and schemes that have wracked the space, and move toward a more transparent model, with institutional and government support. A good start would be to shed the Reddit pump-and-dump “experts” and flush out the speculators and hucksters. Crypto needs a lot more than fashion photographers and self-interested billionaire promoters backing their own investments to build trust in the market.

But that’s just the first step. Crypto has a significant technical barrier to entry, and a further challenge to scale in that it’s complicated to buy and store. Security, standards, and reliability are sorely lacking. There’s tremendous opportunity here. After this year’s plunge, the crypto community’s task now is to broaden participation, so it’s not just a product for speculators and early adopters.

Crypto needs better UX design for the trading experience if it’s ever going to cross the chasm into the mainstream. Functionality gaps in current platforms such as Coinbase restrict users to buying or selling only at current market prices. Features that are better aligned with users’ needs will help bring the institutional support critical for long-term viability, followed by regulation. When a dollar turns into 18 cents in a year, that pain is hard to forget. Crypto needs a reboot, and it’s not easy to see right now when and how that will happen.

The Canary in the Bitcoin Mine