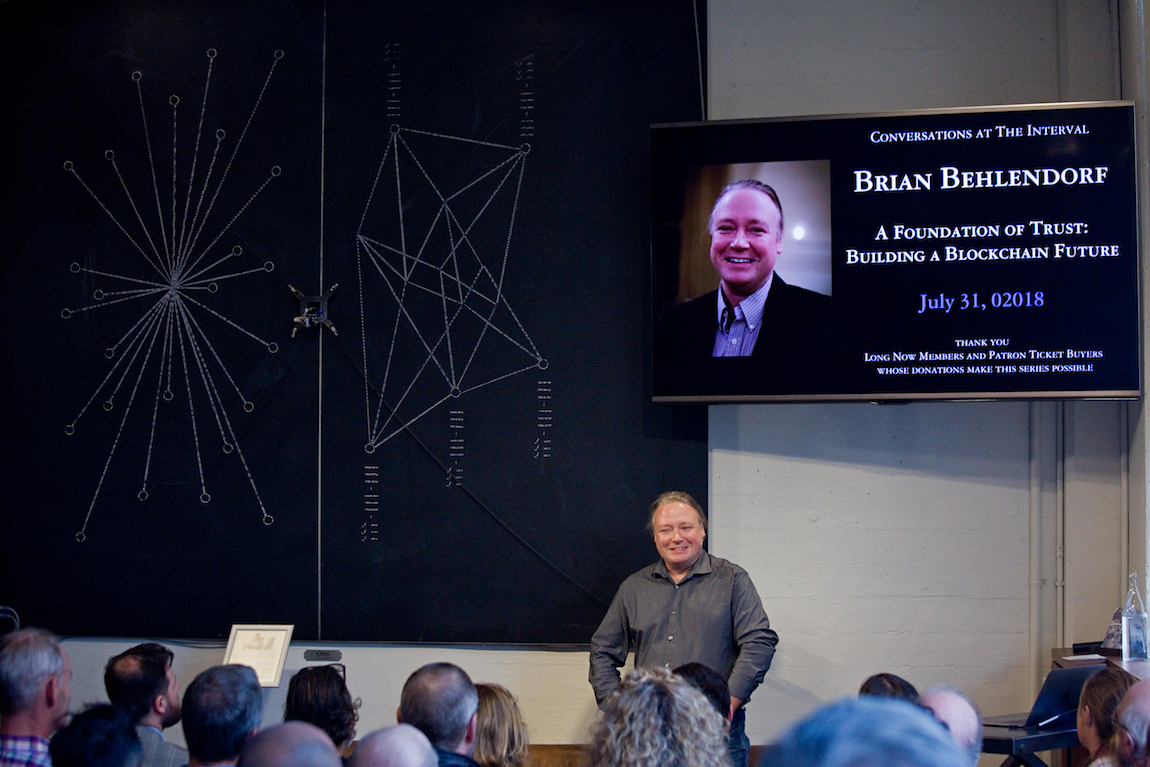 Brian Behlendorf pointed to the floor-to-ceiling blackboard, where Otto the Robot had rendered two massive chalk drawings, the perfect geek backdrop for an animated talk on the future of blockchain. The setting was a packed house at The Interval, the hip, tech- and art-inspired salon, home to The Long Now, with luminaries like Kevin Kelly, Howard Rheingold, and Stewart Brand in the audience. Technologists often get distracted by Bitcoin and other cryptocurrencies and fail to put blockchain in context. But Brian had a perfect example for the tech-savvy San Francisco audience. “Anyone here from Uber?” We craned our necks to see if the 27-year-old Uber employee we’d just met would raise his hand. Brian pushed on, pointing to the sketch on the left: “This is Uber!”

The Uber drawing depicted centralization, a constellation of connected nodes controlled by one middle point. It’s a one-to-many model that grants the owner of the system absolute power. This “puts them in the driver’s seat,” quipped Brian, bringing the risk that they could change balances, arbitrarily fix rates or “play God” – as Uber has notoriously done, with their God View setting.

Contrast that to the drawing on the right, said Brian, explaining how the drawing represented blockchain’s web-like integrated system of “consensus mechanisms” – a network of encrypted, distributed “independent actors connected to each other, talking to each other, transmitting transactions to each other, but ultimately coming to a consistent history of the events that happened.”

The difference was right before our eyes. The blockchain image showed balance, depth, and the opportunity for non-heirarchical control. Brian patiently simplified the tech’s social advantages. A blockchain-based consensus-oriented ridesharing application could be more trustworthy, more transparent, and more honest, both to passengers and drivers.  It could have checks and balances, with data coming into the system through IoT sensors, public traffic data, driving records, and other information.

Being A Good Ancestor

Brian is a man who knows how to build egalitarian systems.  He supports a radically different model from that favored by so many of tech’s winner-take-all, centralized goliaths. A technologist, developer, coder, and Executive Director of Hyperledger, Brian is an “architect who also swung a hammer on the job”, as The Interval’s Producer Michael McElligott described him in his gracious introduction. Brian was a creator of the Apache Foundation and a key player in the Open Source Initiative, who sits on the boards of the Mozilla Foundation and the EFF, and is now the Director of Hyperledger, an umbrella project of open source blockchain code and related tools. As Michael suggested, in classic Long Now vernacular: Brian is a “good ancestor … we’re all benefiting from the tech he’s created and the policies and practices he continues to influence.” 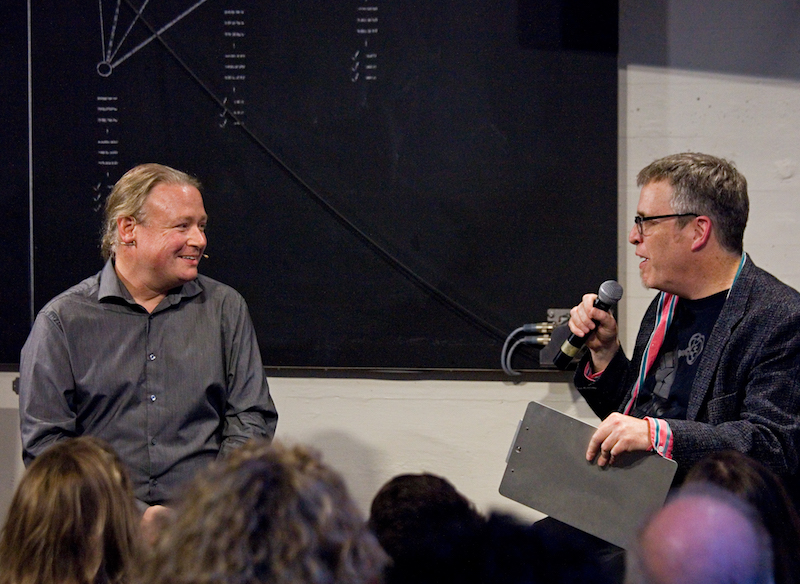 Exhibit A is Brian’s current leadership role in turning blockchain toward public and private good, in providing viable alternatives to traditional centralized databases.

Blockchain is getting real, was Brian’s overriding message. At Hyperledger, he is keenly involved in the latest advancements. The project is a collaboration among dues-paying corporate members including Linux, IBM, Airbus, Daimler, and over 250 consortium members. Hyperledger is far beyond the proposal or planning stages. Everyone in the system is actively building products and services built on top of blockchain code checked into a public depository in the open source community. That lets corporates create deals with customers to do pilots and production systems, “building out the underlying infrastructure” for the future.  Financial services, supply chain, and healthcare are all ripe for distributed ledgers, said Brian, and there’s no shortage of concepts under development in all of these industries.

Diamonds, for instance, are already becoming blockchain’s best friend. The industry, Brian noted excitedly, is now three years into using blockchain as a tracking mechanism to keep “conflict diamonds” off the market. This replaces a broken legacy system that relied on faxes and paper certificates, insuring a history of fraud and missing paperwork. Now, everybody in the chain – from the miner to the distributor, transporter, jeweler, retailer, and customer – has access to a shared ledger containing metadata: “the data about the diamond, its shape, its color, its size,” or even a serial number. The ledger shows an immutable, incorruptible history, and it’s no surprise that the diamond industry would want to adopt that.

The fishing industry, Brian said, will soon be able to employ a similar blockchain system of checks and balances to keep out the bad actors. Integrated consensus-based systems can tap into all manner of data-enabled trackers, from smart buoys to net-based IoT sensors, to GPS and temperature gauges. Fish will be tracked at every point in the supply chain, from the seas, to the boats, ports, wholesalers, retailers, and consumers. Blockchain will help bring transparency to the industry, reducing the chance that fish can be illegally caught, intentionally mislabeled, stolen, or transported under the radar. “Every legitimate fisherman has an intrinsic interest in participating in this system.” Brian said, “because it helps preserve the long-term viability of their industry. When you go into Whole Foods, and something says sustainably caught, you should be able to have much higher confidence that there’s actually something of substance behind that.”

Giving Control to the User

What’s next for blockchain? Giving users better control over their own data for a more convenient and more secure society. “I think most bureaucratic processes – whether it’s starting a business, or getting a birth certificate or diploma, or selling a house or a car – will become blockchain-based,” he predicted. “It just makes more sense for that kind of data to be stored communally, or tracked collectively, rather than being stored up and only defined by what’s in a government database.”

Brian sees a future where most of our data can be stored in a digital wallet with an unchangeable history of who that data was shared with, when it was shared, and who else can access it.

“Maybe that means technology reclaims its role as a tool of liberation in justice.” Brian concluded, “And the war on truth will fail.”

Portal to the Future: Alexander Rose and the 10,000-Year Clock