Brilliantly Made Surfs the Circular Economy 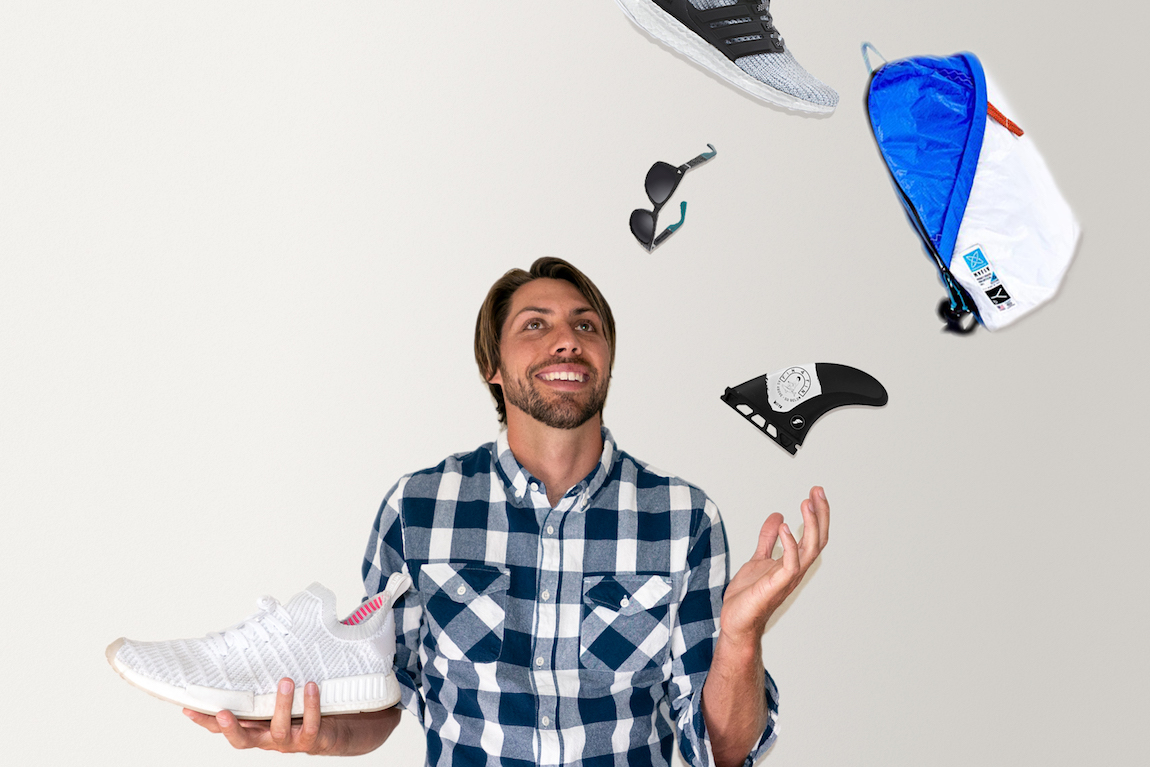 Max came of age in a Willie Wonka-style sneaker laboratory, the son of one of Phil Knight’s early Nike product managers. Home was Manhattan Beach, ground zero for California’s brash surfing culture. The house next door was just the first of a handful of nearby beach cottages that Max’s dad bought or rented, set up to inspire, design and prototype cool new kicks. Max was handed high-end Prismacolor markers. “Pick a source of inspiration,” dad would say, pointing to the piles of surfer and lifestyle magazines. Max wasn’t playing with kids’ coloring books, but blank shoe prototypes, choosing from a rainbow wall bursting with hundreds of Pantone production-ready colors, his first aqua-and-gray surfer-themed effort hitting the stores in the rebel brand Soap Shoes when he was nine. Meet Max James, today the creator of a hot product blog meant to inspire “a better way to make the things that we love”: Brilliantly Made.

Products need origin stories, and Max’s unusual journey tracks his authentic vision. His wild SoCal youth primed him to explore, review, and curate ideas and stuff from the next new cool: the Circular Economy. Just launched late this summer, Brilliantly Made is an elegant review of “products and businesses that are abandoning the old model of extract, make, use, and throw away – and moving towards future-focused business models that are regenerative.” The site is a weekly exploration into “the cross-section where the Circular Economy meets human-centered design.”

Growing up in a surf, skate, and ocean-centered world ultimately led Max to take a longer view beyond rad sneaks and hip apparel. “There were professional skateboarders hanging out and skating off the roof of my house onto the street,” said Max, not to mention a half pipe in the office and a travelling van with skateboard rails and ramps that would roll off it, often parked nearby. The James place was “kind of a happening spot.” Max came of age on a street corner where he routinely befriended skateboarding legends, and lifestyle industry leaders like John Rapp, the noted Patagonia designer, leading later to a friendship with Casey Sheahan, then the CEO of Patagonia.

Max launched his own surf school at 13, cleared $4,000 in profit his second summer, and soon bought his first sailboat. High school didn’t move him. Skilled in Photoshop and Adobe Illustrator by his early teens, at 16 Max dropped out and “worked in the entertainment industry as a graphic designer for everything from the credential passes, to billboards, and step-and-repeat photo backdrops for red carpet events like the MTV Music Video Awards.” Surfing drew him up the coast to Santa Barbara, where he picked up his high school diploma and found a subject that called to him. He majored in geography at UC Santa Barbara, drawn by his “passion for the ocean and sailing” and the unique way that “almost any academic sector has a crossover with geography, because it’s about spatial relationships and how things interact with one another.” Studying, surfing, and living in the bucolic coastal city further heightened his desire for a healthy ocean.

An added jolt of inspiration sprung from his friendship with Patagonia’s CEO, as Max learned more about the Ventura firm’s deep commitment to sustainability. Straight out of college, he landed a dream job with Deckers, the parent company for the hot outdoor-leaning shoe brands, UGG, Teva, Sanuk, and Hoka One One, once again giving Max the rare experience of learning from elders. At 23, boasting the title Innovation Partner, he became the right-hand man of Deckers VP of Innovation. “That opened my eyes,” he said. “Travelling to meet VPs of Innovation from Fortune 500 companies, and being in these discussions and meetings with executives from all sorts of big companies.” It was an exciting two years, but he also quickly came to understand how tricky it was in the corporate environment to “make that boulder move.” Max began consulting and became a director at Concept 21, his father’s global design consultancy firm, working in business strategy, marketing and design, and travelling and working on shoe and apparel brands in the US and China. 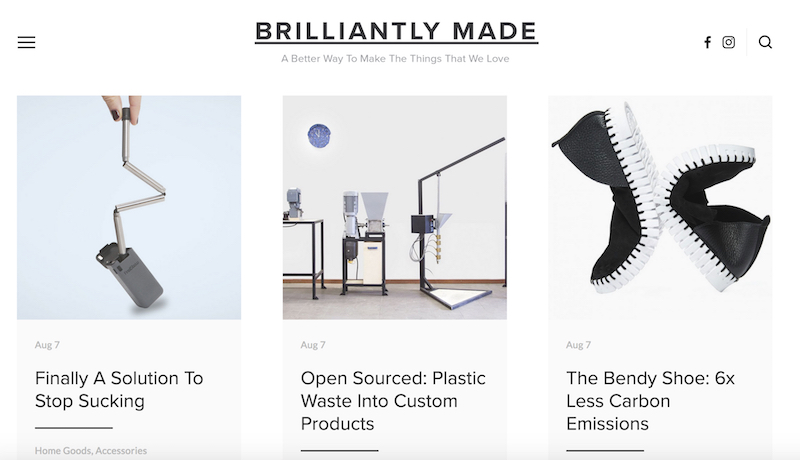 This summer while visiting family in North Carolina, Max stood face to face with America’s disposable economy. The East Coasters thought it weird that he toted around a reusable water bottle, and Max was struck by the huge disconnect between his own deep-seated desire to save the planet and the dominant view that considers single-use plastic an American right. Max came away “inspired to say this is really where the change needs to happen, to bring awareness to things people can do right now that make a difference.” That spark fed into “all the different products people had just started sending me, and the conversation I was having with friends and co-workers.” Max started cataloguing links and exploring brands “doing cool stuff.” He caught a break with the name, registering the apt Brilliantly Made, set himself a fast deadline – and went live in August.

Just in time. Pundits are calling the Circular Economy “The Next Disrupter.” Hot trends launched by Netflix and software firms are “jumping into physical tangible products that are subscription-based,” he says, “because brands are now taking responsibility for that product for its full lifecycle.” Some of Max’s early Brilliantly Made picks feature shoes woven out of reprocessed fish nets and tree-based materials, art objects fashioned out of discarded plastic, and Nike’s big push into subscription sneaks for kids.

Finding an alternative to plastic is becoming an imperative since China recently banned the import of nonindustrial plastic waste. But Max has a higher goal, to show that it’s about far more than recycling. Brilliantly Made explores the creative use of recycled material, the concept of extending the life of everything we already have, “to mimic the biological cycle of birth, deteriorate, and then regenerate.” Amidst our overproduction, overconsumption, and obliviously wasteful self-absorption, there’s something elevating about a site that showcases alternatives to disposable status quo binging. Sunglasses made from ocean plastic, a foldable, pocket-sized metal straw, and a range of environmentally conscious shoes. It’s a mindset. Stepping out against the plastic tide.

Mega brands are rushing to outdo one another in their Circular positioning: H&M has committed to use all recycled material by 2030, and Adidas even sooner, by 2024. Max explained, “What’s really adding fuel to this fire for the Circular Economy is the proof that it makes financial sense, that the business model behind it is actually sound.” And there’s something else inherent in Brilliantly Made. The idea that the global pursuit of “innovation” might finally grow up. That we might move beyond cool products into a zone where companies and customers together will throw out the disposable mindset, and ride a new, bigger wave.

Surfing at the Office: FluidStance