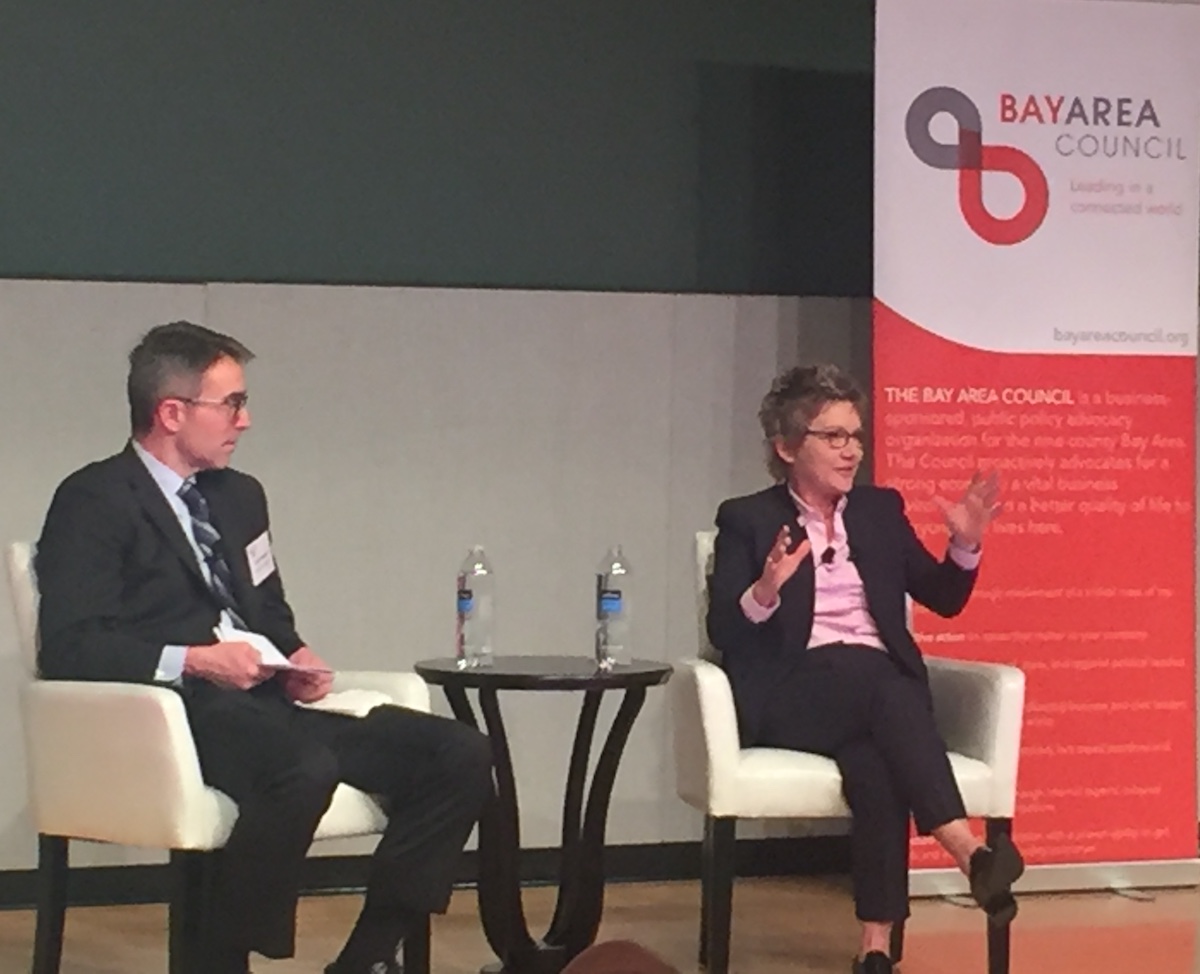 The San Francisco Bay Area is not in a bump and not in a slump. We’re somewhere in the middle, above the national average of 3% GDP growth last year, after a massive tax cut, trillion-dollar deficits, and low interest rates keeping the motor running. “We’ve got the pedal to the metal and we’re going about 55 miles an hour,” declared Micah Weinberg, President of the Bay Area Council Economic Institute, at the council’s annual economic outlook breakfast at McKinsey & Company this week.

The world wants to know where the economic winds are blowing, and this was an excellent place to get a reading. Mary Daly, President and CEO of the Federal Reserve Bank of San Francisco, gave the diverse, international crowd of 300 a less sanguine assessment. She predicts slowed growth in the coming years, to a more sustainable 2%, a figure that may help stave off a recession.

In a panel led by Sean Randolph, the institute’s Senior Director, the consuls general of Canada, Germany, and Japan shared perspectives on Silicon Valley, how their countries are dealing with the challenges of growth, and policy issues that will dramatically impact the world’s economy and the environment for trade and investment in 2019. The high “crane count” in Toronto and other Canadian cities, explained Rana Sarkar, Consul General of Canada, reflects a vibrant economy driven in part by an openness to immigration that brings not only diversity but also prosperity. Meanwhile, three years into Justin Trudeau’s presidential term, investment in the innovation economy (physical infrastructure, healthcare education, academic institutions) is well underway.

Randolph spoke of SF as the epicenter of the global economy, the bellwether microcosm where tech and entrepreneurial breakthroughs happen first. Tomochika Uyama, Consul General of Japan, detailed the influx of companies like Salesforce and SAP into the Tokyo job market. And it’s not just corporates leading the cultural change. Uyama said that in the past, students at Tokyo University would graduate and accept safe jobs with the government. Today, thanks to the presence of accelerators like 500 Startups, Plug & Play, and Y Combinator, Japanese graduates are more likely to choose an entrepreneurial career path.

Germany, explained Consul General Hans-Ulrich Südbeck, has long invested in R&D to support new disruptive technologies, and was also a big architect of the pan-European GDPR policy, which has dramatically shifted the balance of power when it comes to privacy and consumer rights worldwide. Angela Merkel, Germany’s longtime Chancellor, he noted, is herself a scientist. “She believes in science. She knows the importance that science, technology and innovation have for Germany,” Südbeck said, and because the country boasts few natural resources, knowledge is its main export. Germany is planning on enlarging its footprint in the Bay Area in the coming years.

Stanford and The Fed

Jonathan Levin, Dean of the Stanford Graduate School of Business, pointed to indicators of sustained growth, such as grad school applications. “You can tell when the labor market is doing well,” he said, “because students don’t apply as much to business school. So, the current labor market is good for millennials.” Levin also suggested that there’s been no local slowdown in entrepreneurship, stating that 20% of Stanford business school grads launch new companies every year – a figure that roundly beats the 2-3% at peer schools. Meanwhile, wage growth clocked in last year at 3% nationally despite trade difficulties with China and Europe, Brexit, and other pressures. But Kausik Rajgopal, Western Region Managing Partner of McKinsey & Company, questioned the longer-term threat of job loss due to advances in AI and automation. Reskilling will be imperative, replied Levin. He pointed to Stanford’s new initiative to consider how to build algorithms to be more human-enhancing instead of human-displacing.

The dire lack of affordable housing in the San Francisco Bay Area was another looming issue raised throughout the morning. Stanford attempted to build more housing on its 8,000-acre campus, said Levin, but was thwarted by regulations and resistance from the local community. Affordability is key to the health of the community, said Daly of the Federal Reserve, who spoke in conversation with Mark Duggan, Director of the Stanford Institute for Economic Policy Research. Keeping the best talent in the region will require more housing options, better transportation and increased infrastructure support. “If you lose the community connection you ultimately lose the fabric of the economic growth that we want,” Daly said, reiterating the Canadian consul’s sentiment. “Inclusive growth is actually sustainable growth.”

San Francisco would do well to learn the recent lessons of the disastrous federal government’s shutdowns. Daly described this as “policy uncertainty”, the loss of business confidence that negatively impacts entrepreneurship, consumer health, and investment in innovative technologies. California has a new governor, Gavin Newsom, former mayor of San Francisco. He’s keenly aware that tackling social problems and building a thriving entrepreneurial economy go hand in hand. As Levin of Stanford said, students in the Bay Area have an edge: “The fact that we attract entrepreneurial students, the fact that we’re entrepreneurial, those things won’t go away.”